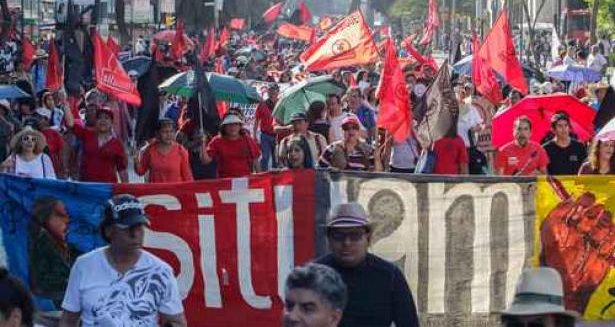 Now far-right candidate Keiko Fujimori is going to try to steal the election, with a team of elite lawyers https://t.co/pzZDDEOdAj

Peru Libre candidate Pedro Castillo has rejected accusations of fraud in the Peruvian elections and has encouraged his supporters to defend the vote in a “historic vigil”. Monday night’s vigil showed the streets of downtown Lima full of supporters of Prof. Castillo, who waving flags and chanting “the people united will never be defeated” showed exemplary discipline and commitment to the new Peru that is coming.

On the other hand, the narco-corrupt candidate Keiko Fujimori, in her desperation for a defeat that is becoming inevitable as the hours go by, denounced on Monday night something that even the most fanatic of her supporters do not believe; a “systematic fraud”, for which she did not provide any consistent evidence. In any case, in the ranks of the Peruvian left that today supports Castillo, the alarms went off since they know the tricks of Fujimori, who does not act alone but counts on the whole ultra right-wing, McCarthyist and corrupt political scaffolding that has taken over the governance in Peru for decades. That is why Castillo, with good sense, insisted that the votes be defended in the streets and insisted that his staff (prosecutors) take care that “no electoral records are stolen or distorted” as the conservative mafia usually does.

It is clear that Keiko’s denunciation coincides with the extension of the advantage obtained so far by Castillo, according to the official scrutiny data released by the National Office of Electoral Processes (ONPE). Castillo has 50.3% of the votes, against Fujimori’s 49.7%, a difference that translates into less than 100,000 votes, according to the latest update. The ONPE insists on calling for patience, in view of a scrutiny that could take several days. The count already reflects 99% of the vote cast in Peru, but a large part of the foreign vote has yet to be counted.

A separate chapter in the implementation of a possible fraud to avoid Castillo’s sure victory is the ONPE, directed by a character named Piero Corvetto Salinas, who was a member of the infamous SIN (National Intelligence Service) when this repressive body that had thousands of Peruvians murdered was directed by the now imprisoned Vladimir Montesinos. In other words, Fujimorism has an important leg in the ONPE and hence the delays in the counting and the news that due to the votes from abroad “the final result will be extended for several days”, as Corvetto declared.

However, thousands of people in the streets, in all the cities and towns know that Castillo has won, that nothing and nobody will be able to snatch the triumph from them, hence the constant vigils and demonstrations demanding the final result. As it happens all over the continent in difficult circumstances, at this time the slogan that runs from mouth to mouth in all the mobilizations hits the nail on the head of what the majorities that voted for Castillo think: Only the people will save the people. And no one has any doubt that the great celebration is approaching.