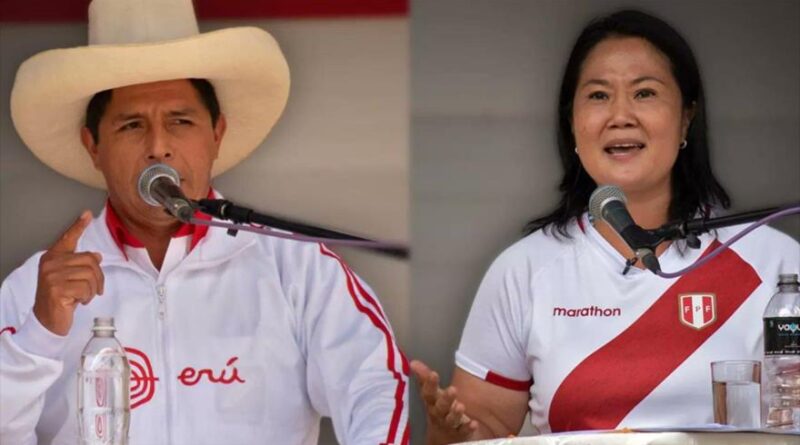 Difference Between Castillo and Fujimori 0.6%.

According to the exit polls from Ipsos Peru / América TV, Keiko Fujimori has got 50.3% of the votes cast in Peru, while Pedro Castillo received 49.7%.

The pollster Ipsos published this Sunday the exit polls of the second round of the presidential elections in Peru. With a difference of 0.6% of votes, the candidate Keiko Fujimori, from Fuerza Popular, and her rival, Pedro Castillo, from Peru Libre, are in a technical tie, considering that the margin of error of the study is +/- 3 %.

“We have a statistical tie, within the margin of error, a very tight tie. There is no way to declare a winner at this moment,” the director of Ipsos Peru, Alfredo Torres, told América TV channel. Alderman Carlos Ramirez-Rosa from Chicago, who is in Peru monitoring the elections, recalled a similar incident in the 2016 presidential election in Peru, when Keiko Fujimori, candidate that time also, had a similar advantage in exit polls, and a few hours later Pedro Pablo Kuczynski had won.

In 2016, exit polls showed Keiko Fujimori winning. She went on to lose once every vote was counted. One thing that’s clear is that Pedro Castillo will win big outside of Lima. Democracy demands that every vote be counted. #Peru pic.twitter.com/ugEq2J9wFI

It should be noted that exit poll is not part of the official results, and the first partial official results will be released by the Peruvian electoral authorities around 11:00 pm (04:00 GMT).

Following the release of the exit poll, Castillo posted a message on Twitter, calling on the Peruvian people to remain in the streets throughout the country in peace, ”to be vigilant in the defense of democracy.”

According to the result of the Ipsos exit poll, Castillo is projected to win in most regions of the country, but Fujimori is leading in some of the most populated cities and especially in Lima, the capital. Usually results from rural areas, where electoral experts consider Castillo as favorite to win, are the last to arrive at the counting centers, that is why many experts are advising for patience and to wait for the final results.

With official data from #Peru’s gov’t website impossible to get right now and an exit poll that ignores the rural areas where @PedroCastilloTe has an overwhelming majority prepare to listen a lot of bs from MSM journos and networks https://t.co/N6nKxXskmz

With messages of unity, both Fujimori and Castillo have promised that they will respect the result of one of the most closely contested elections in the history of the Andean country, hit by the pandemic, economic recession, and a fierce political crisis.

”We will be respectful as soon as there is an official report” of the results, said leftist candidate Castillo. For her part, Fujimori made it clear that she will respect ”the popular, whatever it may be.”

On a new atypical electoral day of the 2021 elections, marked by extreme polarization, more than 25 million Peruvians were called upon to go to the polls to elect their next president.

The voting took place calmly in the cities and towns of the Andean highlands, the Amazon forest, and the coastal region where Lima is located. Around 160,000 security personnel, both police and military, were deployed to guarantee the security of the electoral process.

Peru has had four presidents since 2018, three in just five days in November 2020. The new president will take office on July 28, the day on which Peru commemorates the bicentennial of its independence, replacing the centrist interim president Francisco Sagasti, who urged to his compatriots ”to scrupulously respect the popular will expressed at the polls.”