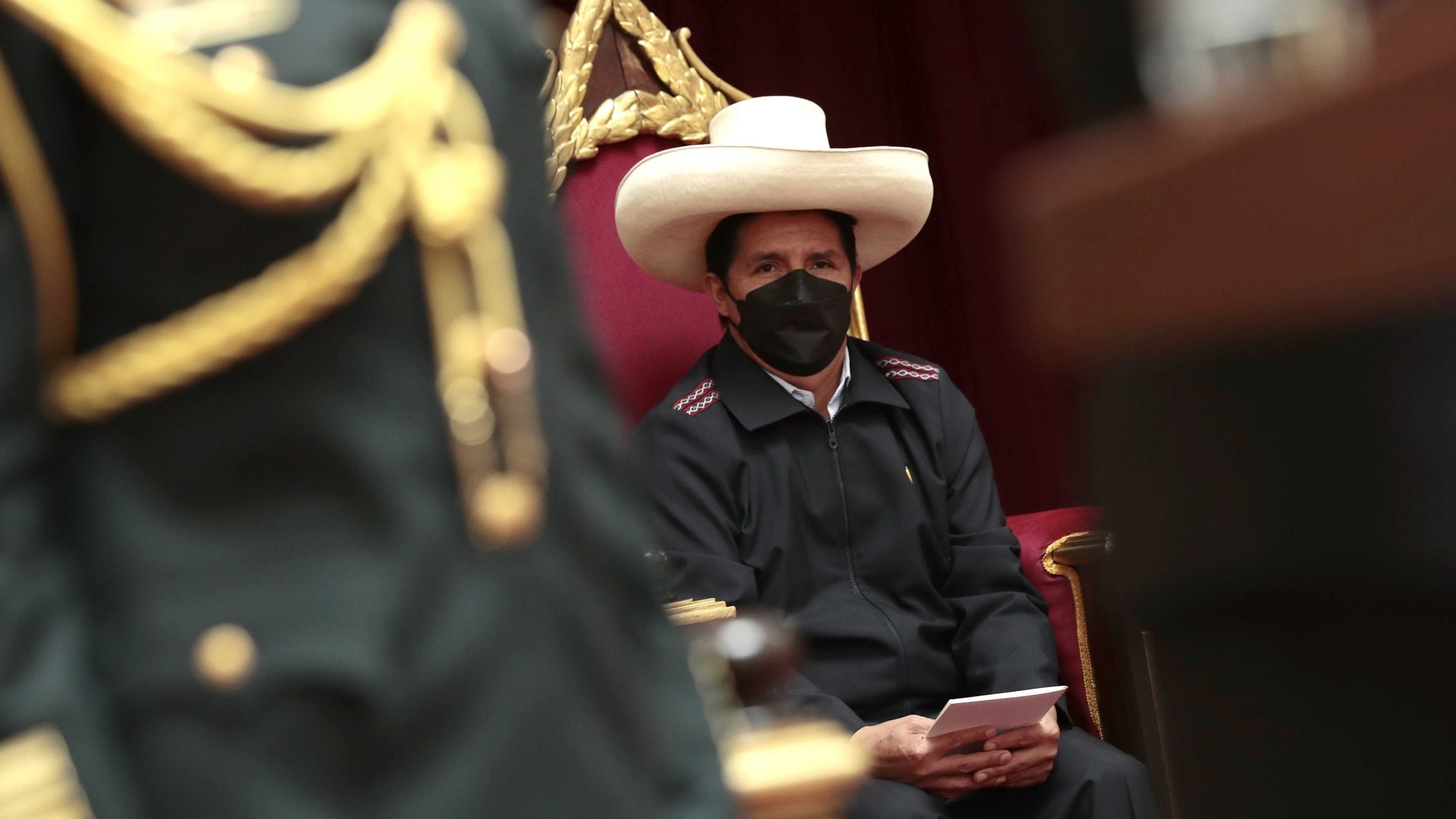 Peru Is Engaged In A Political War

Above Photo: EFE via Folhapress.

The political landscape in Peru is pretty complicated these days. The country has been living a political crisis for years due to the desire of a small minority to control the country both economically and politically. From 2016 until today, five people have occupied the presidential chair. All of them have faced tremendous resistance from Congress, which impeached two of them and threatened to do it with the other two, including the current President Pedro Castillo.

The last remarkable event of these tireless attempts by Congress to impeach Castillo was unveiled by the weekly “Hildebrandt en sus Trece”. According to the outlet, two politicians, together with some Congress members from the opposition, including the Congress President Maria del Carmen Alba, gathered in the hotel “Casa Andina de Miraflores” to discuss the best way to get President Castillo out of the way.

Then it is not weird that all those who attended the meeting were openly neoliberal and followers of Fujimori’s family line of power, from former president Alberto Fujimori to his daughter Keiko, who has lost three Presidential Elections including the latest one against Pedro Castillo. The meeting was part of a plot not only against Castillo but against Peru’s democracy. The right-wing sector is not happy with the idea of a school teacher leading the country and has done everything possible to overturn the decision of the Peruvian People.

This was not a casual event, it was organized and sponsored by Friederich Nauman Foundation and the Center for Public Policy Innovation (CIPP). Both organizations are deeply related to Fujimori’s forces. The Nauman Foundation is led by the husband of Bertha Maria Carrillo, who was a member of Keiko Fujimori’s campaign team. The NGO spent over 125,000 dollars in Facebook advertisement alone to support Keiko, especially her false accusation about electoral fraud.

On the other hand, the CIPP is also directed by two of Keiko’s campaign team members. Carlos Hamman and Gustavo Nokomura who recently received almost 100,000 dollars from Keiko’s party Popular Force, for alleged training in entrepreneurship and innovation and women’s leadership and empowerment.

There is no doubt that how to pull off a coup of Castillo was the main, maybe the only, topic of the meeting, but, apparently, it was not a secret. Shortly after the meeting, some of the attendants openly confirmed what the weekly Hildebrandt reported later. Congresswoman Lady Camones from Alliance for Progress (APP) said on TV, “Why should we be afraid of talking about the presidential vacancy (impeachment)?”. The day after, Jorge Montoya from People’s Renovation (Renovación Popular) tweeted “The dialogue to advance the presidential vacancy is underway”.

However, the above-mentioned NGOs argued that there is nothing related to a plot, but a workshop on Peru’s political crisis in the last 200 years. While it is almost impossible to believe, there might be some truth in that statement, because who better than they to talk about political crises fueled by themselves?

Taking all this into account, it is clear what we have been mentioning since the very beginning of Castillo’s tenure: there is a simmering coup underway and Congress is meant to be the main actor. Since July, there have been uncountable attempts to overthrow Castillo, they have tried to impeach Castillo more than once, with no success. However, it is a permanent threat, a Damocles’ Sword over the President’s head, ever since Congress has exceeded its functions and turned the vacancy issue in the perfect rope to tie the executive.

When we look at Castillo’s first months of presidency, the frontal attack against Castillo is evident. Besides Congress’s unconstitutional and undemocratic actions, the president has been accused of corruption without a single proof of it, which is the most common tactic to discredit leftist forces. Additionally, his cabinets have been under relentless harassment to prevent any success of his government agenda. Four cabinets in six months are the result of the opposition’s actions to fuel the idea of an unstable government.

This constant campaign is aimed at wearing down Castillo’s image and resources to later back their accusations of an inefficient and failed government, something they have achieved so far. Now the media is doing its role in this plot by reporting with great fanfare about Castillo’s falling approval ratings, while intentionally hiding the main, although not the only, cause of this situation.

Castillo’s Party Peru Libre is now pushing in Congress for a censure motion against Maria del Carmen Alba, the head of the legislative, for her active role to overthrow the president. This motion has little chance of advance since Congress is under control of the same sectors that have given Alba the task of taking Castillo out of the way.

Right-wing politicians have fought back Peru Libre’s appeal with unmatchable cynicism. According to them, the attitude of the president’s party does not ease the way in solving the current political crisis. It seems like a joke, but it is real.

The Peruvian opposition is just doing what it knows how to do best: neglecting their responsibilities to the well-being of the people and securing their interests no matter how much the working class has to pay for it. Today, Castillo is fighting a war where bullets are manufactured by Congress, and the victims are not even aware of the state of things.