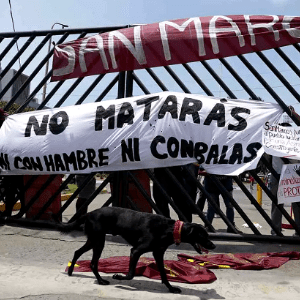 Above Photo: Elements Of The Police Violently Entered And Subdued Student And Social Leaders Who Had Organized For The University Campus To Host The Caravans Of Indigenous Communities That Arrived In The Capital For The Massive Protests Against The Peruvian Government. Jan. 21, 2023. EFE: Paulo Aguilar.

Police Demolished The Fence And Entered With Tanks To San Marcos To Evict Demonstrators.

San Marcos: University students and citizens leave Puno for Lima after violence against their classmates.

From Puno, they fired a new delegation with lawyers, university students and others after outrage over violence against the people of Puno at the UNMSM. https://t.co/H0OMy7iINC

The Peruvian National Police (PNP) entered this Saturday the Universidad Nacional Mayor de San Marcos in Lima, where Peruvians from different regions who came to Lima to demonstrate against the regime of Dina Boluarte are staying.

Elements of the police violently entered and subdued student and social leaders who had organized for the university campus to host the caravans of indigenous communities that arrived in the capital for the massive protests against the Peruvian government.

They have also arrested several people, have thrown them to the ground and are stealing donations and their belongings, according to complaints posted on social networks.

This Saturday, the National Police (PNP) violently entered the Universidad Nacional Mayor de San Marcos (UNMSM) and intervened dozens of demonstrators installed in this university, while the Executive Branch called for dialogue.

A person staying at the student residence of the San Marcos University says that there is no prosecutor during the violent operation of eviction of protesters on campus, where they were staying with permission of the university authorities.

It should be noted that San Marcos University was taken over by students on January 17 in solidarity with the people who have been protesting against the Government and the Congress of the Republic.

Since Wednesday, hundreds of people from Puno, Arequipa and Cuzco, among other parts of the country, began to arrive at this university, coming to the Peruvian capital to participate in the large marches called for the resignation of President Boluarte, the closure of Congress, the convening of a constituent assembly and early elections.

After the entry of the agents, police with riot gear gathered at the gates of the campus to cordon off the area. The operation was supported by a police helicopter.