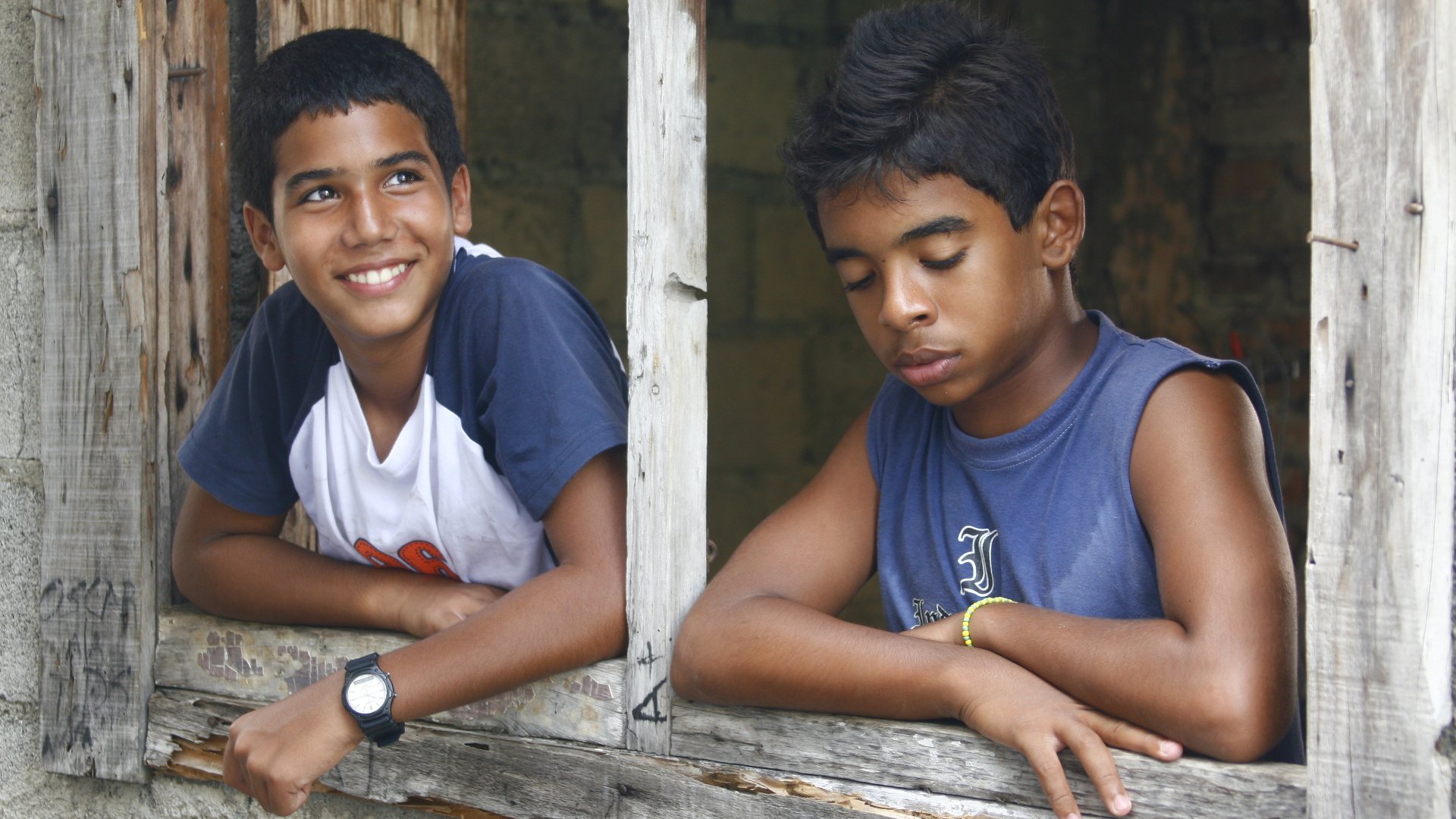 Help us break through Google’s censorship.Please use the buttons on the top left to share this article on social media.

Last year’s film hit in Cuba was “HabanaStation”, directed by Ian Padron. It is the touching story of a developing friendship between two boys from very different social backgrounds: one from a materially comfortable family living in Miramar, the other living in a “poor” barrio of Havana. For many foreign views of the film it is a shocking window into economic inequality in Cuba. For Cubans, it is a welcome public acknowledgement of a well-known reality.

But the comments I’ve seen on “HabanaStation” overlook what makes it a powerful revolutionary film. For it is a contrast between the humanly impoverished world of the “middle class” boy who is an only child in a nuclear family with no friends except his playstation games that his father brings back from his travels abroad and, on the other hand, the rich community life of the boy from the barrio. It is the latter that is held up as the more humanly fulfilling life.

The African American ghettos of Baltimore and other US cities once also nourished such a community. Prior to housing desegregation Black ghettos were multi-class communities with a vibrant social life, where poor and better off lived next to each other, where youth had role models of success among their friends and resources were shared.

In those days I taught at a Black university in Baltimore. The ghetto in west Baltimore was such a community. African American doctors, lawyers, teachers and other professionals lived next door to school janitors, numbers runners, etc.  There were entertainers and ministers and respectable businessmen like undertakers along with independent entrepreneurs in the informal economy of the drug pushers and prostitutes.

All of these made up the community. And it was a community in the literal sense of the term –a common unity bound together by racial segregation and a shared culture. There were class differences to be sure.  But these were secondary to a shared racial identity and life situation imposed by the racism of white society.  Neighbors helped neighbors.  If a child misbehaved on the street he would be corrected by whomever witnessed it and they would then report it to the parents.  And that was not viewed as meddling in other people’s private lives. There was spontaneous mutual aid. If someone was short on rent money one month, a collection might be taken up by neighbors to help. It was understood that “what goes around, comes around.”

Much of this mutual aid operated through the Black church. This was the key institution within the Black community, the only one truly independent from white society. The largest Black church in Baltimore was Bethel AME. It had a strong social mission in the community. It was a vehicle for interclass solidarity as “wealthier” members financially supported food programs, low income housing, clinics, etc. for their less fortunate brethren.

The public school was also an important institution even though largely controlled from outside the community. It was in the schools and on the streets that youth came in contact with their peer group. Regardless of economic background or the social standing of their parents, they were all thrust into a common school. “Middle class” and poor children alike played and formed friendships together. That meant that even the most disadvantaged had friends whose families might serve as role models for them. It also meant that they had “contacts” that might be useful in later life who could be called upon to help an old friend from the ‘hood.

That vibrant multiclass community of the Black ghetto began to change by the end of the 1960s. With the passage in 1968 of federal laws prohibiting racial discrimination in housing, it became possible for the more successful African Americans to move to better housing, often in the suburbs. The fair employment opportunity act also opened up better jobs for many Blacks. Residential and occupational mobility gradually disbursed the Black community. As Black sociologist William Julius Wilson has argued, there has been an increasing class differentiation among African Americans.  There has been a gradual polarization as successful Blacks moved to the white suburbs, leaving behind an underclass with reduced access to social and material resources and increasing social pathology.  On the one hand there emerged a Black “middle class” in the suburbs of Baltimore and on the other hand a Black underclass in the inner city –what Wilson called “the truly disadvantaged.”

This creeping polarization and the resulting impoverishment of the ghetto can be seen in the evolution of Bethel AME church. At first, the more successful members who had moved to the suburbs would still return to their old neighborhood on Sunday mornings. With that and continuing family and friendship relations, they still had one foot in the ‘hood. But whereas they used to walk to Sunday church services, now they drove their cars in from the suburbs. Soon traffic and parking around the church became impossible. The narrow streets around Bethel were completely blocked with cars every Sunday morning. Something had to be done. So Bethel built a new church in the suburbs.

Now Bethel had two churches, two congregations, distinguished by location but also by class. Their members were still linked by race, but also separated by class as the significance of race declined in social life. The wealthier church continued financial support of the poorer inner city branch. But the personal connections weakened as each class lost personal knowledge of the other. The ghetto underclass that had been abandoned was left with fewer resources, human and material.

My question for Cuba is whether the current reforms might lead in a similar direction, increasing the already significant social differentiation within Cuban society, leaving many behind as others advance through individual enterprise.  Wouldn’t such mobility be a perverse violation of the common values and norms of socialism?

In many ways the picture of La Tinta, the poor neighborhood in “HabanaStation,” resembles the Black Baltimore ghetto of the 1950s and early ‘60s. There is a rich, vibrant community life where children are free to roam the streets, exploring and playing together. It is this world that Mayito discovers through his classmate Carlos, and finds so humanly appealing. Mayito’s own neighborhood in Miramar is a direct contrast. There we see social isolation amidst the greater material comfort. It is the stereotypical middle class life of the US suburbs. His life there is a privileged one with an overly protective mother and a father who is a well-known cultural figure who travels abroad. (The physical resemblance to Abel Prieto, former Minister of Culture, is probably more than coincidental.) They are loving parents who show their love in the only way they know how  –by spoiling him. It is by a chance encounter with Carlos in the slum La Tinta that Mayito is brought into the kind of communal human relations that his own life lacks. It is this depiction of the superiority of lower class life that makes “HabanaStation” a revolutionary film. It is a critique of bourgeois life.

But is La Tinta a multiclass community like the Baltimore ghetto of yesterday? The film doesn’t give us a clear picture of any class differences within the community. All are depicted as “poor”. But given the limited residential mobility that has long been available to urban Cubans, it is likely that there are differing economic circumstances among neighbors. But this is not visible due to the generally poor housing. Indeed, it is this that leads the viewer to see La Tinta as a poor neighborhood. But in fact, that is not a reflection of the economic situation of people, their income or occupation. It is a consequence of larger social circumstances that have impacted the quality of housing.

It is precisely those circumstances that are changing with the reforms now under way in the country. Opportunities for occupational and residential mobility are opening up for Cubans. The expansion of self-employment is making individual entrepreneurship possible. And while public policy aims to prevent the accumulation of wealth, clearly some are becoming much better off than others. Economic differences are widening. And as they do, won’t those with the means take advantage of the new residential mobility to seek better housing elsewhere, in Miramar or even more upscale enclaves elsewhere? And as they migrate out of the ‘hood, won’t they take with them resources, leaving those left behind with reduced prospects –just as happened in BaltimoreGhetto?

The root of the problem is that we are looking at individual mobility. If instead of individual entrepreneurs there were social entrepreneurs, forming new cooperative enterprises or spearheading local development projects, all could share in the benefits of their common endeavors, thereby preserving social solidarity. To me, that looks a lot more like a socialist mobility.
In the film Mayito’s parents do not look down on the people in Carlos’ community; they do not exhibit an air of class superiority. This may well be due to the unifying culture of the Revolution that has fostered social solidarity. But my question would be, how long can this survive in the face of growing class differences?

Note 1:  The term “class” is not being used here in the scientific Marxist sense, but in the way commonly used in US social science to refer to differing socio-economic statuses most clearly identified by life styles.