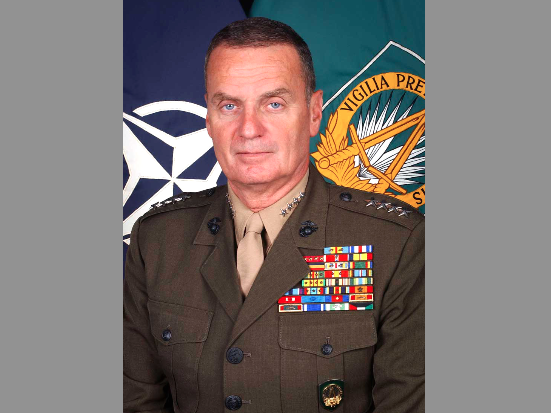 The political carnival that is the prelude to the Iowa caucuses has started over a year and a half early. At the center of it this time around: a game of political hot potato over the northern leg of TransCanada‘s Keystone XL tar sands pipeline.

James Jones used his time on the podium to promote the Keystone XL tar sands pipeline, which another James — retired NASA climatologist James Hansen — once called a “fuse to the biggest carbon bomb on the planet.”

Days after the Obama Administration decided to delay making a decision on Keystone XL North until after the 2014 mid-term elections, API went on the offensive, with Jones acting as the group’s surrogate.

API is using one of its numerous front groups that could factor most prominently during election season: the Iowa Energy Forum, chief sponsor and organizer of the event titled, “The Pipeline to National Security Discussion.”

An April 17 press release published in Des Moines’ Business Record lists Matt Bierl of LS2group as the contact person. And a glance at the guest list for the Facebook event page for Drake University event shows eight of the 22 attendees work at LS2group.

Mark Twain once quipped, “History doesn’t repeat itself, but it does rhyme.”

In that vein, rewind back to 2012 and the activities by Iowa Energy Forum before the Iowa caucuses, with PR efforts overseen by LS2group.

Among other things, former Minnesota Republican Governor Tim Pawlenty — who ran for president in the 2012 GOP primaries — had two campaign advisers that wore two hats, Charles Larson Jr. and Karen Slifka. Both of them also worked for LS2group in the run-up to the Iowa caucuses, where they work full-time now.

Both Larson and Slifka denied they were coordinating Iowa Energy Forum’s agenda with the Pawlenty campaign in an interview with The Des Moines Register. But evidence suggests otherwise.

“Pawlenty’s new ad features people wearing Iowa Energy Forum shirts even though the ad doesn’t even mention energy issues,” explained an August 2011 article published on The Iowa Republican. “The people featured in the Pawlenty ad are Jennifer Cantrick and Maddison Abboud, two summer interns that were hired to work for the Iowa Energy Forum by Larson and Slifka’s firm.”

Further, Iowa Energy Forum also made an appearance at the 2011 Iowa Straw Poll held in Ames, Iowa and did so in style.

“An air-conditioned ‘igloo’ paid for by the Iowa Energy Forum will rise up from the straw poll campus in Ames next month, an attraction meant to woo Iowans’ affection with free treats, kids’ rides and displays about energy technology,” explained an article in The Des Moines Register. “The Republican Party of Iowa has received $100,000 from the organization.”

In response to Jones’ jaunt to campus, Drake University students held a protest outside of his speaking engagement.

“There is no Planet B, this project won’t create jobs, it will raise gas prices in the Midwest, and none of these other issues matter if catastrophic climate change destroys the ability of the Earth to sustain human, plant, and animal life,” Drake students Jade Suganuma and John Noble said in a statement provided to DeSmogBlog.

Activist group Iowa Citizens for Community Improvement provided DeSmogBlog with some photos of the protest and The Des Moines Register produced a short video segment on it, too.

As with the 2012 campaign cycle, it appears Keystone XL will be tossed around in 2014 by those candidates on the take of Big Oil as a political hot potato in the aftermath of the Obama Administration’s election-year punt.