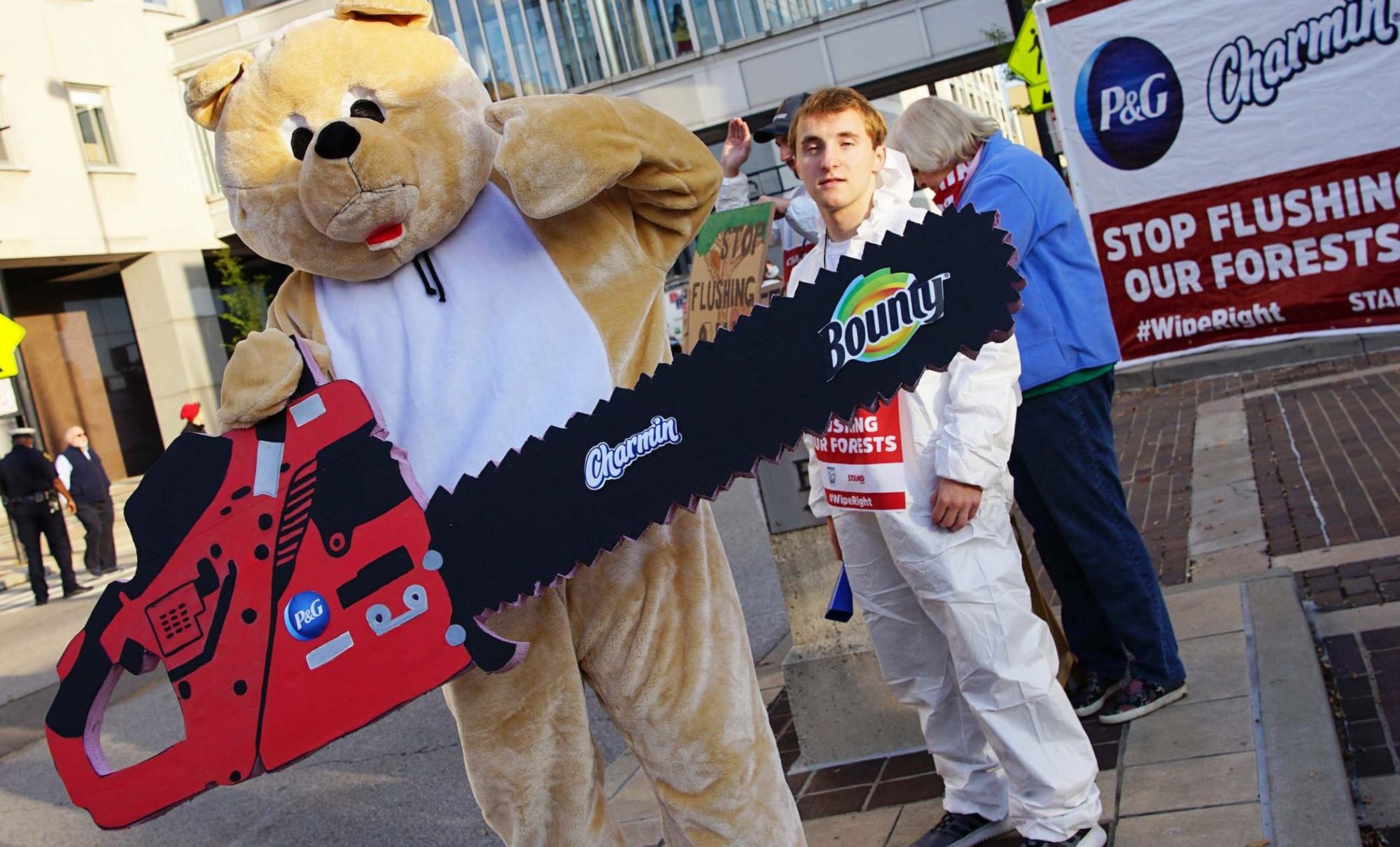 At the Company’s Annual Meeting.

In win for advocacy groups, 67% of shareholders split from company’s recommendation and vote yes on key proposal to protect boreal forest of Canada, tropical forests in Southeast Asia.

Washington – In a shocking move by Procter & Gamble’s shareholders that defied the company’s own recommendations, two-thirds of Procter & Gamble (P&G) shareholders voted “yes” at the company’s annual meeting on Tuesday, October 13, to pass a proposal on forest sourcing and impacts. The vote is a clear indication that despite repeated insistence from company executives, the world’s largest consumer goods company is not doing enough to deal with the financial threats of deforestation and forest degradation in its supply chains.

67% of shareholders voted yes on Green Century Equity Fund’s shareholder proposal #5 (page 78), which reads “Shareholders request P&G issue a report assessing if and how it could increase the scale, pace, and rigor of its efforts to eliminate deforestation and the degradation of intact forests in its supply chains.” (See the full text of the resolution below.)

“P&G’s CEO David Taylor has been trying to convince shareholders and customers that the company is doing enough for forests. Losing this shareholder resolution by a huge margin is a slap in David Taylor’s face and a clear rebuke. The owners of the company are saying directly to the CEO, ‘You have failed and you need to do more to protect forests,’” said Todd Paglia, Executive Director at Stand.earth.

“This is a clear directive from investors that P&G needs to do much more than the status quo to protect the world’s remaining intact forests. This vote makes clear that shareholders agree that P&G is not doing enough. The choice now for P&G is whether they will work with us to establish a more sustainable supply chain, or face even greater pressure from concerned citizens and their investors moving forward,” said Shelley Vinyard, Boreal Corporate Campaign Manager at NRDC.

“This vote is a clear sign that shareholders are asking Procter & Gamble to do more. P&G must take action for forests globally and the communities who depend on them. In Indonesia and Malaysia, P&G needs to take responsibility for the palm oil it sources for soaps and shampoos, and take a stand for workers rights, Indigenous rights, rainforests, and the global climate,” said Brihannala Morgan, Senior Campaigner at Rainforest Action Network.

“Over the past decade, major institutional shareholders have too often failed to use their voting power to defund deforestation and forest degradation. Today’s overwhelming vote at Procter & Gamble is a watershed moment for shareholder power to challenge management and defend forests,” said Jeff Conant, Senior International Forest Program Manager with Friends of the Earth U.S.

The vote comes amid mounting pressure from international environmental advocacy groups — including Stand.earth, NRDC, Friends of the Earth, Rainforest Action Network, David Suzuki Foundation, and Wildlands League — to expose the ways Indigenous and frontline communities have been historically impacted by Procter & Gamble’s destructive forest sourcing, land grabbing, and poor labor practices in the boreal forest of Canada as well as tropical forests in Malaysia and Indonesia, where the company sources some of its palm oil and fiber from. Learn more about the campaigns in this briefing note sent to P&G investors.

In recent weeks, advocacy groups had increased their campaigning in support of the proposal, hosting a virtual webcast critiquing P&G’s “Our Home” climate initiative, leading multiple days of protest outside the company’s headquarters in Cincinnati, Ohio, and holding private meetings with shareholders to discuss the proposal. Groups including NRDC and Stand.earth met with a combined $90 billion of P&G investors representing about 30 percent of total shareholder value — including some of the largest investment institutions in the world.

About the Issue with Tissue Campaign

Today’s shareholder vote comes more than a year after the launch of Stand.earth and NRDC’s Issue with Tissue campaign against Procter & Gamble for making toilet paper and tissue products from endangered forests and threatened species habitat.

In February 2019, Stand.earth and NRDC released the “Issue with Tissue” sustainability scorecard flunking Charmin and other major toilet paper brands for refusing to use zero recycled content in their at-home toilet paper. In June 2020, NRDC released “The Issue With Tissue 2.0,” including a new sustainability scorecard that once again flunked P&G brands.

In the months following the release of the 2019 report, activists with Stand.earth created a “blind wipe” video spoofing Charmin over its softness claims, held a protest outside Procter & Gamble’s shareholder meeting featuring a chainsaw-wielding bear, got Santa arrested for delivering coal to Procter & Gamble’s headquarters, delivered a tongue-in-cheek Earth Day message about folding vs. wadding toilet paper, released a poll showing 85% of Americans want toilet paper makers to use more environmentally responsible materials, and supported religious leaders in Cincinnati in sending a letter to Procter & Gamble about the moral imperative of addressing climate change.

About the Boreal Forest

Despite engaging in a long negotiation process with company executives late last year, Stand.earth and NRDC reached an impasse with Procter & Gamble over its sourcing practices. The company refused to set time-bound goals to stop sourcing from Canadian suppliers that don’t meet the 65% habitat intactness thresholds established by the Canadian federal government to support the survival of endangered boreal caribou. The company has also failed to require its suppliers to adhere to the principles of Free, Prior, and Informed Consent when sourcing from traditional territories of First Nations in Canada.

The boreal forest of Canada is the largest intact forest remaining on the planet, and it also stores more carbon per hectare than nearly any other forest type on Earth (second only to mangroves), making it vital to mitigating the worst impacts of climate change. Often called the “Amazon of the North”, this climate-critical ecosystem is home to over 600 Indigenous communities, as well as boreal caribou, pine marten, and billions of songbirds. The loss of this intact forest is impacting Indigenous peoples’ ways of life and driving the decline of boreal caribou and other species.

Procter & Gamble recently launched their “It’s Our Home” climate initiative, which centers around “the power of nature as a climate solution.” The initiative includes plans by P&G to protect places “that are rich in carbon”, such as the mangroves in the Philippines. However, the announcement conveniently downplayed the massive impacts the company has on the places it sources its fiber and palm oil, and completely ignored the boreal forest.

Green Century Equity Fund, 114 State Street, Suite 200, Boston, Massachusetts, 02109, the owner of at least $2,000 in value of Common Stock of the Company, has given notice that it intends to present for action at the annual meeting the following resolution:

Whereas: Procter and Gamble (PG) uses palm oil and forest pulp. These commodities are among the leading drivers of deforestation and forest degradation, which are responsible for approximately 12.5 percent of global greenhouse gas emissions and also contribute to biodiversity loss, soil erosion, disrupted rainfall patterns, land conflicts, and forced labor.

Companies that do not adequately mitigate deforestation and forest degradation in their supply chains are vulnerable to material financial risk.

Supply chains that illegally contribute to deforestation are increasingly vulnerable to interruption from regulatory action and enforcement, and in 2019, two of PG’s Tier 1 palm suppliers were tied to illegal deforestation.

PG lists potential reputational damage from the real and perceived environmental impacts of its products as a risk factor in its 2019 10-K. The Company received negative attention from 115 NGOs for sourcing pulp from forests that serve as a substantial global carbon sink. PG also received unfavorable coverage from media, including major outlets like Reuters, for failing to meet its 2020 zero-deforestation palm oil goal. Chain Reaction Research calculates PG’s potential reputational losses at $41 billion, or 14 percent of equity, which “dwarfs the cost of solutions.”

PG was rated below these peers by both Forest 500 and CDP Forest and as “high risk” by SCRIPT, a soft commodity risk analysis tool.

PG lags on implementing its existing no-deforestation commitment, achieving RSPO certification for only one-third of its palm oil supply and retaining as its single largest palm kernel oil supplier a company that has not obtained RSPO certification since 2016. Additionally, PG lacks a comprehensive plan to mitigate exposure to deforestation and forest degradation throughout its operations; its current sourcing policies allow the Company to source from critical ecosystems, like Canada’s boreal forest.

Failure to adopt and implement policies that mitigate these exposures may subject the Company to significant systemic and company-specific risks.

Resolved: Shareholders request PG issue a report assessing if and how it could increase the scale, pace, and rigor of its efforts to eliminate deforestation and the degradation of intact forests in its supply chains.

Supporting Statement: Proponents defer to management’s discretion on the content of the report but suggest that indicators meaningful to shareholders may include: