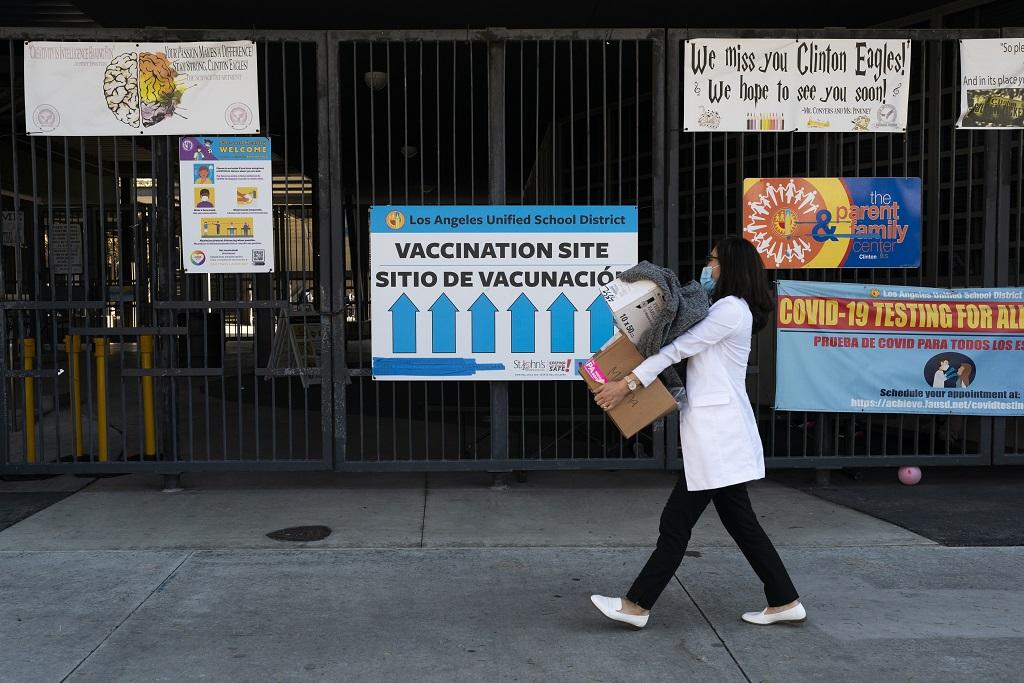 Thousands of pharmacists are protesting low pay and increased workloads.

Today, a fledgling independent union of pharmacists is launching the first-ever nationwide walkout of these critical health care workers.

After being forced to work on the pandemic front lines distributing medicines to millions of sick COVID patients, including hundreds of millions of vaccines, pharmacists have had enough, and are fighting back in unprecedented ways.

“So many pharmacists are just really under so much stress,” says Dr. Shane Jerominski, whose Facebook page “The Accidental Pharmacist” has 93,000 followers, many of whom are part of the growing independent union effort. “Right now without a union, their concerns are falling on deaf ears … between the script volume with COVID, and these COVID tests, COVID vaccinations, flu vaccinations, there’s always more work with less help.”

While pharmacists are being stretched to the limit, their pay is now at record-low levels. Pharmacists often graduate from 6-to-8-year degree programs with close to $200,000 in debt. However, chains like CVS have starting salaries for pharmacists of only $45,000.

As a result of federally funded vaccination programs, pharmacy chains are making record profits, but those profits aren’t being passed on to workers.

Pharmacist pay is often supplemented with bonuses and incentives to give out flu and COVID vaccines. Many pharmacists say that they feel pushed to meet the quotas, while being deprived of meal and bathroom breaks.

“When you have to work under so much pressure to meet quotas, there is a real danger that you can get a prescription wrong. And if you don’t meet these goals, you can get written up,” says 34-year-old pharmacist Bled Marchall Tanoe, who now works at a hospital in Oklahoma. Tanoe helped start a popular pharmacist online movement called #PizzaIsNotWorking. A Facebook group she helps run has seen membership grow to 45,000 people.

The name of the movement came from the efforts by pharmacy chains early on in the pandemic to offer their pharmacists free pizza to raise morale, instead of better pay or less hazardous working conditions.

While Tanoe hasn’t fully signed on with the walkout, she feels many of the same frustrations.

“With the addition of COVID vaccines, COVID testing, the pressure is getting even higher,” says Tanoe. “You have a similar amount of people working, and you’re still required to do more.”

Tanoe has documented increasing incidents of nervous breakdowns, migraines, and even fatal heart attacks among pharmacists. Many, like Tanoe, wind up leaving retail pharmacies to work in hospitals, which pay better and sometimes are even unionized. But this creates internal conflicts.

“I wanted to work in the retail store. I wanted to serve the community,” says Tanoe, an immigrant from the Ivory Coast. “I like working with people and helping them get the right medicine, and it’s sad to have to leave the community because of the working conditions in most retail pharmacies.”

It wasn’t always this way in the pharmacy profession. Up until the 1970s, many pharmacists used to work in small local pharmacies, which not only paid well but offered paths to one day becoming potential partners in the business.

However, federal regulators relaxed merger enforcement during the Reagan administration, allowing mega-corporations like CVS to expand dramatically while driving down workers’ wages.

The top seven dispensing pharmacies account for 72 percent of the revenues of all prescription drug sales. But two of those, Cigna and UnitedHealth, are insurance companies that run specialty pharmacies without a physical location. The remaining five—CVS, Walgreens, Walmart, Kroger, and Rite Aid—dominate the market. And at the top, they have integrated across the pharmaceutical supply chain to maximize profit.

“CVS doesn’t just own pharmacy, they also own Aetna, the big insurance company, and they own Caremark, which is like a middleman in the pharmaceutical space,” says Matt Stoller, the director of research at the American Economic Liberties Project, who has written extensively about pharmacy consolidation in his anti-monopoly newsletter BIG.

Caremark is a pharmacy benefit manager, one of three majors that handle prescription drug benefits for most health plans. (The other two big PBMs, Express Scripts and Optum Rx, are aligned with insurance companies Cigna and UnitedHealth, respectively.) These middlemen pitch themselves as cost reducers that negotiate with drug companies for lower prices. But they skim off the top with unjustifiable fees, squeezing revenues for independent pharmacists.

This makes it difficult for the nation’s 20,000 independent pharmacies to stay in business. Many smaller communities have become pharmacy deserts, with their critical link to the health care system severed. Other pharmacists sell out to the big chains, which get better treatment from the PBMs.

In the case of CVS, they own a PBM themselves, enjoying better margins on drug sales than their rivals. By also owning an insurance company, CVS can drive business toward its own pharmacies and away from independents.

By keeping workers’ wages low, chains like CVS can keep profits high. Those profits are then being used to undermine one of the last bastions of autonomy for pharmacists in the industry.

But now pharmacists are fighting back. The nationwide strike, which hopes to extend to thousands of pharmacists, is part of a broader effort to form a new independent union.

Because of the small size of many pharmacies, many unions have been hesitant to invest serious resources in organizing. Smaller shops with only half a dozen dues-paying members tend to be less profitable organizing investments than larger shops that are more economically efficient for union representatives to service.

The pharmacists’ union, which is undergoing a democratic process of being named, was formed through online organizing during the pandemic. The union has already raised $22,000 from 376 pharmacists on the union’s GoFundMe page.

“If anyone is gonna organize pharmacists, we are gonna have to do it ourselves because traditional unions aren’t going to invest in this type of organizing,” says Jerominski.

The fight ahead for pharmacists will be long, but they are determined, after a grueling pandemic during which many pharmacists died serving their patients, says Jerominski.

“We’ve been on the front lines of this pandemic the entire time, and it’s time that we get treated with respect.”