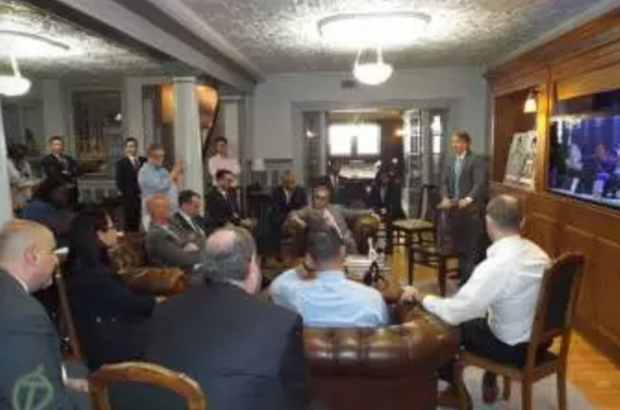 Above Photo: Philadelphia lawyers met Wednesday afternoon at the Law Offices of Krasner & Long, LLC, to discuss defending activists who get arrested while protesting at the Democratic National Convention. Photo Credit: C. Norris – ©2016

Any protester arrested in Philadelphia for engaging in free speech during the DNC will have quality legal representation.

Philadelphia – (Politics): More than a dozen copies of the book, “Crashing the Party: Legacies and Lessons from the RNC 2000,” sat in a brown box on a sturdy wooden table just inches from where twenty or so private Philadelphia criminal defense and civil rights lawyers who will defend free speech at the Democratic National Convention convened to introduce their collaborative to the news media, answer journalists’ questions and, once the press exited the Law Offices of Krasner & Long, LLC, talk strategy among themselves.

In the front of the room on my right side was a poster of the TIME magazine cover featuring ‘The Protester’; and opposite that were the blown-up mugshots of Dr. Martin Luther King, Jr., and Ms. Rosa Parks, two bold activists that prominent Philadelphia attorney Mr. Michael Coard – who recently took on the case of an anti-police violence activist whose been recently incarcerated and held on $900,000.00 bail for allegedly impersonating and then later assaulting a police officer – said he would’ve defended had he been practicing law during the Civil Rights Movement.

In his brief introduction, Mr. Coard said Dr. King and Ms. Rosa Parks talked about civil rights and civil liberties, as do the activists who will be camped outside, or assimilated inside, the Wells Fargo Center, the arena that will host the bulk of the convention.

Ahead of the Democratic National Convention, the City of Philadelphia is planning to acquire law enforcement liability insurance, which would cover potential claims of police brutality and various civil rights violations that might arise during demonstrations. The insurance wasn’t purchased as a precaution, argued Mr. Larry Krasner, but rather for protection. In others words, whereas one might buy car insurance in case of an accident, the City is purchasing the insurance so that it can engage haphazardly with protesters.

Mr. Krasner’s partner at the firm, Mr. Lloyd Long, said the City’s desire to give a great presentation at the DNC doesn’t trump citizens’ right to protest.

Another lawyer in the room said “Protesters have the ability to change the world.”

Mr. Vazken Zerounian, the son of first generation immigrants whose great-grandparents were murdered due to their religion and advocacy, called the City’s impending insurance policy (a similar one was purchased with taxpayer’s dollars in 2000 ahead of the Republican National Committee) “offensive” and, like Mr. Long and the other attorneys in the law offices this afternoon, said he will happily defend anyone who gets arrested for speaking out during the DNC.

During the first media walk-through of the Wells Fargo Center, convention executives confirmed there will be a “free speech zone,” though the exact locale is to be determined.

Mr. Paul J. Hetnecker, who has represented dozens of protesters over the years including those who were arrested at the RNC in 2000, said the free-speech zone, which he characterized as “ill-advised,” is meant to undermine, not bolster, free-speech.

Mr. Krasner remembers the free-speech zone in 2000; he described it as “remarkably small” and said that it came with a time limit – 43 minutes – for each group.

The free-speech zone 16 years ago, which was out of the earshot of lawmakers, was more like a “tiny internment camp for people with ideas,” asserted Mr. Krasner, who suggested that the news media inquire of convention executives and city officials as to the size of this year’s free-speech zone and how close, or how far, it’ll be from the delegates’ view.

For those this year in the free-speech zone and elsewhere nearby, the Up Against the Law Legal Collective will offer support in real-time as well as, ahead of the DNC, offer ‘Know Your Rights’ training at the Arch Street Methodist Church on July 9th, 16th, 20th and 23rd.

No lawyer in the room this afternoon has yet to be invited by the City of Philadelphia to DNC planning meetings; and none of them to date have coordinated their efforts with the Philadelphia Police Advisory Commission, though the group remains open to both opportunities but aren’t holding their breath.