Philadelphians To Philly Orchestra: Cancel Your Trip To Israel

April 4, 2018, Philadelphia – Over 100  musicians, artists, scholars, union members and activists, as well as 33 social justice organizations, have called on the Philadelphia Orchestra to cancel its planned June tour in Israel. In a March 21 letter, they explained that the orchestra’s trip is part of “the Israeli government’s Brand Israel propaganda strategy,” and called on the orchestra “not to lend your good name to covering up Israel’s oppression of Palestinians.”

The Philadelphia Orchestra’s claim that their performance in Israel is “cultural diplomacy,” not “a political mission,” is undermined by their own admission that the trip is “in celebration of its [Israel’s] 70th anniversary” and by their close collaboration with Israeli government officials, before the trip and in the planned itinerary.  At a joint celebration with the orchestra, officials from the Israeli consulate in New York confirmed that The Philadelphia Orchestra’s planned performance in Jerusalem supports Israel’s unilateral declaration of Jerusalem as its capital, a status that contravenes international law and denies indigenous Palestinian rights to their native city.

On Friday, as Palestinians in Gaza marched for their lives, the Israeli military attacked from land and air, killing 18 unarmed Palestinians and wounding over 1400 more.  At least 773 people, unarmed and demonstrating on their own land, were shot with live ammunition by snipers in a single day, apparently on clear shoot-to-kill orders from the Israeli government.

Such examples of Israel’s contempt and wanton destruction of Palestinian life are precisely the sort of abuses with which The Philadelphia Orchestra will be associating itself in making this trip.

In a March 26 emailed response, the orchestra’s co-Presidents Ryan Fleur and Matthew Lode invoked “brotherly and sisterly love,” and “peace and tolerance through music,” but did not address the substance of the letter.  The Philly Don’t Orchestrate Apartheid campaign responded by questioning how a planned meeting with Miri Regev can be reconciled with love, peace, or tolerance.  Regev is Israel’s Minister of Culture and Sport who likened African asylum seekers to “a cancer,” apologized to cancer survivors for the association with Black people, posted a video of herself with Israeli soccer fans as they shouted genocidal chants at Palestinians, and introduced “loyalty in culture” legislation to deny funding for activities that “‘contravene the principles of the state.’” 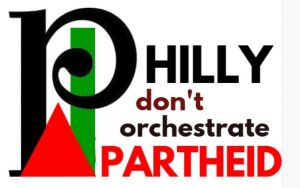 Inspired by the global cultural boycott that helped end Apartheid in South Africa, Palestinian civil society has called on international cultural institutions not to perform in Israel as a popular non-violent means pressuring Israel to end its occupation and apartheid policies.

Viola player for the Galilee quartet and conscientious objector, Omar Sa’ad, explained, “Since its founding, Israel has sought to erase Palestinian identity, including Palestinian arts and culture – denying Palestinian artists the ability to travel, canceling performances, closing venues, seizing materials, blocking funding, and even trying to ban the work of our national poet Mahmoud Darwish. By celebrating Israel and collaborating with the Israeli government, the Philadelphia Orchestra will be taking a clear position against the freedom of Palestinian artists.”

Susan Abulhawa, from the Philadelphia Don’t Orchestrate Apartheid group said, “Intentionally or not, the orchestra’s tour is wholly in the service of the Israeli government’s propaganda strategy that exploits visits by international artists to divert attention from its violent, repressive policies towards the indigenous Palestinian people. We are appealing to the The Philadelphia Orchestra not to use our city’s beautiful art in service of a foreign government’s state propaganda.”