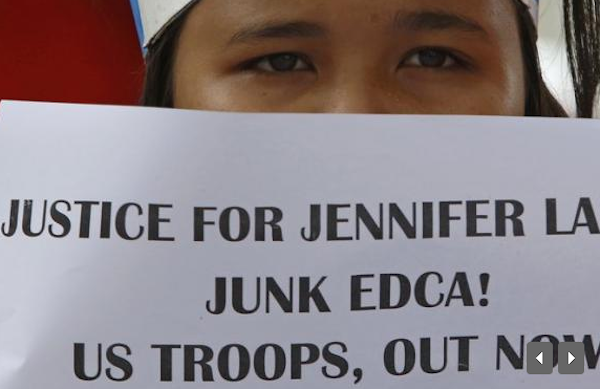 A student displays a placard during a protest rally against the killing of a 26-year-old Filipino transgender Jennifer Laude, outside the U.S. embassy in Manila October 14, 2014. CREDIT: REUTERS/ERIK DE CASTRO

(Reuters) – The United States will keep custody of a Marine suspected in the murder of a transgender Filipino he met in a bar, the head of the Philippine military said on Tuesday, and U.S. officials said a number of U.S. warships would remain in the country.

“Under the Visiting Forces Agreement, the custody of the erring soldier stays with the Americans,” General Gregorio Catapang said after a meeting with Admiral Samuel Locklear, head of the U.S. Pacific Command.

Chuck Little, a spokesman for U.S. Marines in the Pacific, said Locklear had told all U.S. warships remotely related to the incident to stay pending an investigation into the killing of Jeffrey Laude, 26, who was found strangled on Saturday in Olongapo City.

Army Colonel Steve Warren, a Pentagon spokesman, said one Marine was being held pending investigation and three others were being questioned. The U.S. military has not disclosed the name of the suspected Marine because no charges have yet been filed against him.

Philippine officials had earlier said one U.S. Navy ship, the USS Peleliu, would remain while others which had been in the Philippines for a 10-day military exercise, would leave.

The ships were the Peleliu, an amphibious assault ship; the USS Germantown, a dock landing ship; the cargo ships USNS Sacagawea and USNS Washington Chambers; and the JHSV WestPac Express, a high-speed catamaran.

“The Marine Corps will continue to fully cooperate with the Philippine authorities during the investigation and any follow-on actions that are required,” Little said.

A murder case could be filed against the Marine as early as Wednesday, a police source said, adding that authorities were waiting for completion of a post-mortem report.

The Philippines will have criminal jurisdiction, according to Catapang, meaning that local courts would try the serviceman.

He said the region’s two oldest security allies met on Tuesday to finalize more than 400 military activities next year under a mutual defense treaty, focusing on maritime security and humanitarian assistance and disaster response operations.

“This will not affect our relationship with the United States,” Catapang said, noting that the incident did not occur during the exercises but while the soldier was on break.

During the meeting between Catapang, Locklear and Philippine Defense Secretary Voltaire Gazmin, Locklear offered his regrets for the incident, expressed sympathy with the victim’s family, and sought a full investigation, Catapang said.

The U.S. Navy Times said the Marine was in the custody of American military officials aboard the USS Peleliu in connection with the case.

A Philippines nationalist group that opposes a 10-year defense cooperation pact signed by Manila and Washington in April demanded that the government take custody of the serviceman.

“Surrender the American soldier to Philippine authorities, then allow all U.S. ships and military personnel to leave and never come back,” the group’s leader, Renato Reyes, said.

Presidential spokesman Herminio Coloma assured the family of Laude, who also went by the name Jennifer, that the Philippine government would make every effort to secure justice.