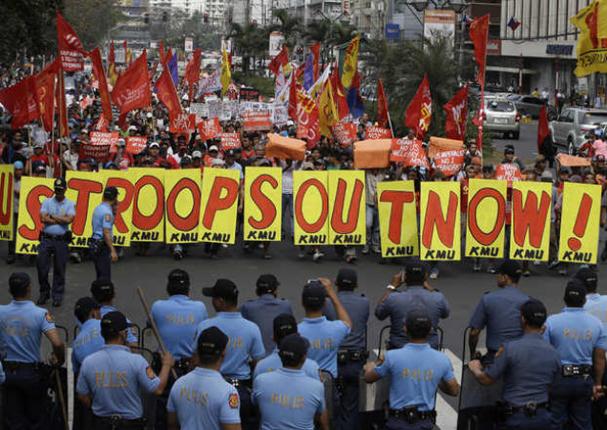 Police clashed briefly in the Philippine capital Tuesday with about 300 protesters opposed to a planned visit by President Barack Obama and the continued U.S. military presence in the country.

Riot police across a road from the U.S. Embassy were pushed back by the demonstrators, prompting the police to retaliate with truncheons.

The protesters allied with the May One Movement workers’ federation held a brief program of speeches denouncing U.S. imperialism in front of the seaside embassy before dispersing peacefully. No arrests were made and there were no serious injuries.

About 500 American soldiers are based in the south where they have been providing Philippine troops anti-terrorism training since 2002. Protesters say their presence violates Philippine sovereignty. The Philippine Constitution allows foreign military bases only under a treaty.

Obama is scheduled to visit the Philippines in April, part of a tour of Asia which will also take him to Japan, South Korea and Malaysia to boost diplomatic and economic ties with the region.

Elmer Labog, chairman of the labor federation, said the protest was meant to show opposition to what he called a “conspiracy” between thePhilippine and American governments to maintain U.S. troops in the country by raising the “China bogey.”

The Philippines, which has one of the weakest militaries in Asia, and China have conflicting claims to parts of the South China Sea.

Nearly a century of U.S. military presence in the country ended in 1992 after the Philippine Senate voted to end a lease on a naval and an air base which were then among the largest American military facilities overseas. However, seven years later the two sides signed a Visiting Forces Agreement that currently permits limited U.S. troop visits, mostly in the south where Filipino troops are battling militants.

Negotiations began last year on a new defense agreement that would allow larger numbers of U.S. troops to have temporary access to Philippine military camps and bring in aircraft, ships and other equipment.