Two articles below on this developing story.

A tense stand off is ongoing between 200 RCMP, Mi’kmaq blockaders, and about 200 supporters. According to the Stimulator, the chief and tribal council personally blockaded gas company trucks behind barricades. Protesters have hurled rocks and a corporate news tripod at the RCMP. At the moment, RCMP are making mass arrests, SWN vehicles appear to be rolling out of the compound, and six RCMP vehicles have been set ablaze.

Molotov cocktails were thrown from the woods earlier this morning in defense of the land and peoples. The RCMP, some with long rifles, entered the woods. Shots were fired, and screaming was heard. There is an unconfirmed report that activist Steven Gould has been shot. (UPDATE: We are now receiving reports that less-than-lethal rounds have been fired at supporters, as well as tear gas. Pepper spray has been deployed against supporters attempting to get through police lines. The RCMP is currently unloading riot gear.)

Supporters broke through police lines to join the Mi’kmaq (video here). The RCMP have erected a barrier on one side of the blockade, and appear to have the blockade surrounded. More people are coming to support with food and water.

Solidarity blockades have sprung up elsewhere in the Mi’kmaq territory. There are solidarity actions planned at the Canadian Consulate in NYC at 5pm and the Canadian Embassy in DC, as well as Vancouver and Winnipeg.

As of time of writing, arrests have been made, and there is at least one report of police brutality against Mi’kmaq warrior Suzanne Patles, an Ilnu woman and member of the Mi’kmaq Warrior Society. (UPDATE: It appears that mass arrests are currently being made.)

According to the New Brunswick, Anglophone North School District, the RCMP did not notify them of the raid as is legally required. Schools are currently on lock-down.

The Mi’kmaq are blockading Highway 132 near Rexton to halt the activity on the compound belonging to a gas company, SWN Resources Canada. SWN Resources has been illegally trying to frack the land of the Elsipogtog for months, and the tribe has been joined by other tribes of the Mi’kmaq and Wabanaki Confederacy peoples in attempts to take direct action against the gas company.

According to Ellen Gabriel of the Kanien’kehá:ka Nation, “Forcible removal of Mi’kmaq on their traditional lands, [is] an illegal act by Police who should not enforce.”

Last week, a Canadian judge issued an injunction against the blockade, but the Elsipogtog have sought peaceful negotiation. Today’s raid must be seen as a preemptive action to prevent the October 18 day of action from taking place, which was called by the Mi’kmaq Warriors Society for physical support of the SWN blockade.

The demands of the Warriors Society are the following:

Violence erupts in N.B. as RCMP move in on anti-fracking protest

By Gloria Galloway
The Globe and Mail

Police cars were set ablaze near a reserve north of Moncton, N.B., on Thursday as the RCMP clashed with native protesters who are trying to prevent seismic testing at a proposed shale gas development near their community.

The violence erupted after Mounties arrived at a compound owned by SWN Resources Canada to enforce an injunction obtained by the company to stop a blockade that was erected by members of the Elsipogtog First Nation.

“There are six police cars that are on fire,” Susan Levi-Peters, a former chief of the Elsipogtog First Nation, said in a telephone interview on Thursday morning. The cruisers were set alight after the arrest of Elsipogtog chief Arren Sock and several council members who were trying to intervene in the dispute.

When the people heard about the arrests, “everybody got mad and the cops were chasing them and they ended up at the row of RCMP cars lined up on the road,” Ms. Levi-Peters said. “Now, the cars are on fire.”

The New Brunswick RCMP said in a release that at least 40 people had been arrested for various offences, including firearms offences, uttering threats, intimidation, mischief and refusing to abide by the court injunction.

The police said at least one shot was fired, but not by them. Molotov cocktails were thrown at the police and at least five RCMP vehicles were destroyed by the fire.

“The RCMP has worked diligently with all parties involved in hopes for a peaceful resolution. Those efforts have not been successful. Tensions were rising, and serious criminal acts are being committed,” said Constable Jullie Rogers-Marsh, an RCMP spokeswoman.

“There have been threats made to employees who were working with a private security firm at the site, as well as firearms offences, incidents of intimidation, mischief and other criminal behaviour,” Constable Rogers-Marsh said. “For those reasons, and to ensure public safety, police action was required.”

But native leaders say it was the police who sparked the melee when they arrived with guns drawn.

“There are people who have been tasered,” said Ms. Levi-Peters, who has acted as a go-between for the police and those members of the community who are trying to stop the development, which they believe will lead to fracking operations that could cause irreparable environmental degradation to their reserve and the surrounding area.

Plastic bullets have been fired and the police have dogs, she said.

“It’s Oka all over again and it’s sad because we said all we need is public consultation,” Ms. Levi-Peters said, referring to a 1990 dispute between Mohawks and the government at Oka, Que., that turned deadly. “These Warrriors, they are not militant. They are youth and they have had enough.”

The blockade was being mounted with drums and feathers, she said, “and instead the government sent in the army on them.”

The Elsipogtog community has been erecting blockades throughout the summer in an effort to prevent the testing and there have been previous arrests.

MORE RELATED TO THIS STORY 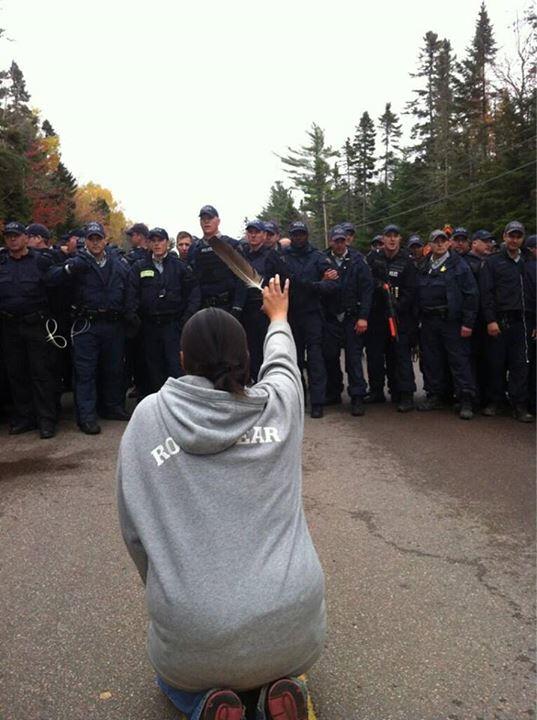