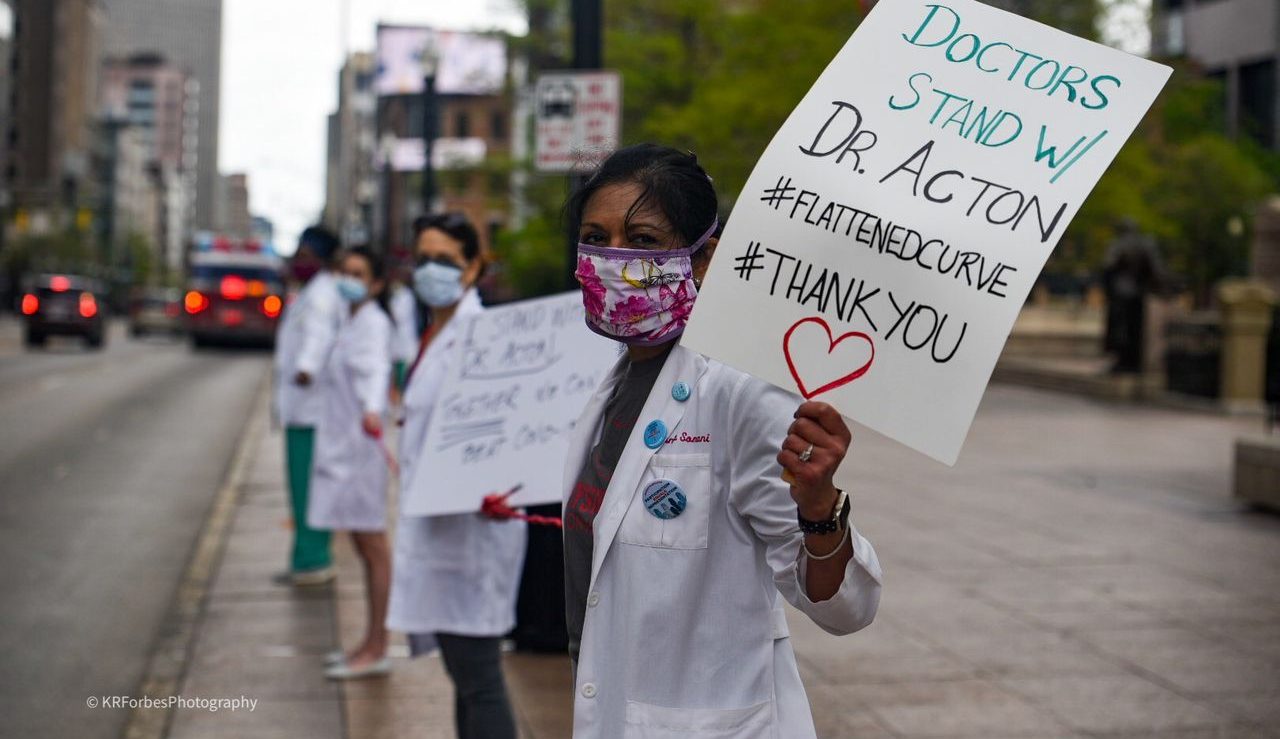 Above photo: Members of the Ohio-based Physicians Action Network gathered at the statehouse Sunday for a socially distanced demonstration in support of Ohio Department of Health Director Amy Acton. Katie Forbes of KRForbesPhotography.

The demonstration comes one day after another small group gathered outside Acton’s home in the Columbus suburbs, lamenting the state’s stay-at-home order and pushing for the state to re-open in full.

About 25 physicians donned their scrubs and lab coats Sunday and stood a safe distance apart as a show of support for Acton, a video posted on the Physicians Action Network Facebook page shows.

In the video, one masked physician – Anita Somani, an OB-GYN based in Columbus – notes that many doctors are in similar positions to those protesting the stay-at-home order that’s kept hundreds of thousands of Ohioans out of work for weeks. Not all doctors work in hospitals, and some own small businesses too.

“We understand the economic difficulties that people are in,” Somani said. You can watch the full video below.

Katie Forbes, a photographer who attended both the Saturday protest at Acton’s home and Sunday’s gathering at the statehouse, said the scene Sunday was peaceful overall. A few Columbus police officers stationed themselves in front of the statehouse to monitor the situation, Forbes said.

Forbes spotted only one counter-protester, a man who rode his motorcycle by the scene several times, yelling at the doctors and asking why they weren’t helping patients. The same man was also at the Saturday protest in Acton’s neighborhood, Forbes said.

Sunday’s statehouse demonstration was a notable switch from the omnipresent protests at the same location over the past several weeks. Those spirited groups – including some protesters armed with long guns and ignoring social distancing guidelines – have frequently vocalized support for President Donald Trump, the anti-vaccination movement and a prejudicial, conspiratorial distrust of Jewish people.