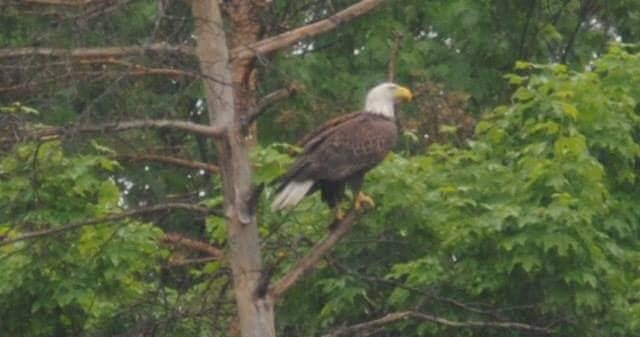 Footage of Resident Alleging Millenniums Hired Eagle Expert is Lying to D.E.C. and US Fish and Wildlife

The Millennium Pipeline was planning on cutting down trees feet from a protected Nesting Bald Eagles nest, even after they requested and were provided with footage of the Eagles in the Nest this Month. 24 hours after the stay was lifted Millennium Employees were found on Ridgebury road in the Town of Wawayanda with chain saws and hardhats. They were on the location where pipline carrying fossil fuels will pass through town owned Property. They had their hard hats on and chainsaws ready.

Michelle Smith Hook was among those Millennium Employees. Hook brought an “eagle expert” who claims to have investigated the nest September 2016 or “September of last year” as she states in the video. We learned later (in the first footage you see here) she was actually there this morning and ignored the Wawayanda Resident Claims who lives closest to the tree who sees Eagles there often.

A resident who told the same Millennium hired “Eagle Expert” about the eagles was ignored as late as this morning (documented on live unedited footage). Although Kathy Michell was only standing a few thousand feet the Occupied Eagle Nest, Michell did not know the name of the road the nest was off of. She said “I’ve never heard of that road”. The Eagle expert Kathy Michell also claimed “you can’t photograph this nest” even though THIS VERY week a Times Herald Record reporter did just that and published an article about the nest along the VLP Pipeline.

The Eagle expert did not know the name of the road or how Scott Martens (who is is filming at this time in the video) could have taken a picture. It was almost like she is asking how photography works. Which makes us wonder did this expert not take photos when she performed “studies” for the Billion dollar corporation that hired her?

Did she not return to the nest to do a comprehensive study after “September of last year”. She also fails to take in to consideration how Eagles don’t keep calendars and they may show up EARLY!! There’s also this little thing called “global warming” that’s kind of messing with the migratory pattern of birds.

The local residents have been very happy seeing Eagles all over the Rutgers Creek Area over the past month. It’s almost as if the Eagles have returned to protect the people from CPV and Millennium Pipeline.

Call the DEC police 845-256-3013 ! The millennium pipeline company is KNOWINGLY illegally clearing trees within 100 feet of a nest and mating pair of bald eagles to destroy their habitat and evidence. We need an official on scene to uphold the Federal Bald and Golden Eagle Protection Act and document Millennium’s illegal activity.

Please call Thomas Wittig of the U.S. Fish and Wildlife Services 413-253-8577and Thomas Berkman of NYSDEC and demand that they protect our eagles. Tell them the #EaglesRUs. Deputy Commissioner and General Counsel Thomas Berkman *** 518-402-9185 thomas.berkman@dec.ny.gov And they are protected under the Federal Bald and Golden Eagle Protection Act Please call Attorney General Eric Schneiderman 212-416-8446 and Governor Cuomo 518-474-8390