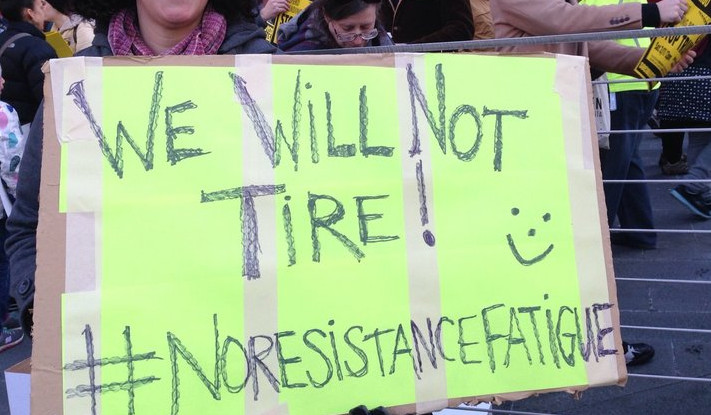 Pipeline Fights are a Fight for Our Lives

There are fights against new pipelines and other fossil fuel infrastructure around the country as people demand an end to carbon-based energy and a rapid transition to clean renewable energy. On Clearing the FOG Radio, Margaret Flowers and Kevin Zeese speak with three people who are deeply involved in pipeline fights about the impacts these projects have on their communities and the lengths that fossil fuel companies will go to in order to protect their profits. In Western Maryland and West Virginia, TransCanada wants to build a pipeline under the Potomac River in a place where the geology is very porous and a spill will poison the drinking water for 6 million people. In Pennsylvania, Sunoco is building a pipeline that will carry fracked gas to an export terminal on the Delaware River. The company is harassing families who do not want the pipeline built. And in Louisiana, in the Bayou region known as Cancer Alley, Energy Transfer Partners is trying to build a final leg of the Dakota Access Pipeline that will harm mostly lower income communities of color. More about our guest discussing the Louisiana conflict below.

Pastor Harry Joseph of the Mount Triumph Baptist Church in St. James, Louisiana, is taking legal action to prevent the Bayou Bridge pipeline from being built in his community, roughly 50 miles west of New Orleans. He is named as a plaintiff in a case filed by the Tulane Environmental Law Clinic, petitioning the Parish Court to overturn the coastal permit that the Louisiana Department of Natural Resources (DNR) gave Energy Transfer Partners, the company that built the controversial Dakota Access pipeline.

The Bayou Bridge pipeline will be the last leg of the Dakota Access, carrying oil fracked in North Dakota to Louisiana. The final stretch of the project, if built, will span 162.5 miles from Lake Charles to St. James, cutting through the Atchafalaya Basin, a national heritage area and the country’s largest wetland.

This pipeline will transport crude oil from the oil and gas hub in Nederland, Texas, to a terminal in St. James Parish’s Fifth District, a small, predominately low-income African-American community of fewer than 2,000 in a stretch of land along the Mississippi River known as Cancer Alley.

A Beleaguered Town With No Way Out

Pastor Joseph found out about the Bayou Bridge pipeline shortly after a tornado affected the 5th Ward earlier this year. A power line came down, blocking the only road residents can use to get in and out of the area. It was a stark reminder that the community doesn’t have an evacuation route — and the only alternative road out was closed to the public by an oil storage company that bought the land.

A home in St. James next to oil storage tanks.

“The pipeline is one more risk to our community that we really don’t need,“ Joseph told me. The community is already facing the imminent construction of two multi-billion-dollar methanol plants.

“People are sick of being sick and tired,” Joseph told me. “Politicians tell us that the new developments are good for St. James because of jobs and money” ― two things he points out that he is not against but he thinks that the greed of those in power needs to be put in check. “My prayer is that they look at the situation the community is facing — and not just how much money the state is making, but instead, look at how many people are being destroyed.”

A Community as ‘Collateral Damage’?

At a hearing for the pipeline permit, Joseph allied himself with environmental groups opposing the pipeline, including Bold Louisiana, Gulf Restoration Network, the Sierra Club, and the Atchafalaya Basinkeeper, which are also part of the lawsuit against DNR. The Louisiana Environmental Action Network has also been helping the community fight against the petrochemical plant permits and other developments adding to air and water pollution in the area.

Genevieve Butler, who goes by the name Eve Miller, a representative of the community-based organization H.E.L.P.(Humanitarian Enterprise of Loving People) Association, is also a plaintiff in the lawsuit. Miller and Joseph hold meetings about the pipeline fight the third Monday of each month at the Mount Triumph Baptist Church, which has become a hub for pipeline resistance.

I met Miller at her home before the last meeting on June 19. She lives across from numerous oil storage tanks at the end of a dead-end street. From her porch we looked out at a field full of oil tanks. “The area used to be pastoral, but now it is almost void of life,” she told me. “We no longer hear birds, frogs, or insects, and our fruit trees don’t flower anymore.”

Miller describes the community as “collateral damage.” It angers her that, when oil storage facilities started expanding at a rapid clip in 2014, she says white residents in the area were bought out, but not a single black household.

Eve Miller on her front porch in St. James.

“Everyone knows someone who has cancer, has died from cancer, is suffering from cancer, or has some type of illness that could lead to cancer. So every household knows something about cancer,” Miller told me. “But when I was a teenager growing up in the same area — you didn’t see people sick and dying.”

Because the Louisiana Tumor Registry doesn’t provide sufficient data to pinpoint elevated cancer rates in specific towns, and no recent health survey has been done, proof that the industrial installations are the cause of people’s cancer isn’t conclusive. However, anecdotal reports from the community are alarming, and the future doesn’t look any better.

“We have been told if an accident happens, to shelter-in-place,” Miller told me. “Close windows and doors till you get an all clear. But in our area, houses have shifted because of the ongoing construction — there is no place to stay safe. None of the windows and doors closes tightly.” As we spoke, we could hear banging coming from construction of a new facility on the other side of the levee down the road from Miller.

Building a Case Against the Pipeline

Timmy P. Rousel, the St. James Parish President, responded to the community’s concerns after Pastor Joseph submitted a petition with 400 signatures calling for an evacuation route during a council meeting. In a letter to Joseph, Rousel encouraged residents to identify any frail or elderly who will require emergency assistance to contact their nearest senior center and have family members create an emergency plan ahead of time. “But no plan can help you if the only road in and out of the area is shut down,” Miller pointed out.

A St. James Parish resident in her yard on Burton Street.

Burton Street used to be a public road offering an alternative route out of St. James Parish’s Fifth District but has been closed to the public by industry.

Lisa Jordan, deputy director of the Tulane Environmental Law Clinic, told me the situation in St. James was one of the worst instances of environmental injustice she has seen.

The lack of an evacuation route is a key factor cited in the law clinic’s petition. But that didn’t play into DNR’S original decision to grant the pipeline permit, according to Patrick Courreges, Louisiana DNR communications director. He explained that DNRonly takes into consideration when the proposal would make substantial changes to areas, and that the addition of the Bayou Bridge pipeline to St. James Parish wouldn’t qualify.

Tulane’s petition to the Parish Court also alleges that the DNR ignored a state constitutional provision: “The natural resources of the state, including air and water, and the healthful, scenic, historic, and esthetic quality of the environment shall be protected, conserved, and replenished insofar as possible and consistent with the health, safety, and welfare of the people. The legislature shall enact laws to implement this policy.”

The clinic’s case argues that, as the Louisiana Supreme Court has ruled, this provision compels the state to reduce negative impacts on the environment and public welfare before approving a proposal that impacts the environment, and as Tulane says, “DNR failed to do that.”

Can the Law Clinic Win?

On June 14, the Tulane Environmental Law Clinic won the reversal of another contentious permit DNR issued in a residential community in Belle River, Louisiana. In that case, DNR granted a permit to FAS Environmental Services that could lead to the expansion of its injection well operation in the Atchafalaya Basin. Like Energy Transfer Partners, FAS Environmental Services has a poor safety record, which played a role in the court’s decision to revoke the permit.

Despite the recent legal victory, the odds are stacked against stopping any pipeline in Louisiana. In the last 10 years, DNRhas not turned down a single pipeline permit request. But Pastor Joseph is hopeful that the court system will ultimately help him save his community.

Homes on Burton Street in St. James Parish sit next to NuStar Energy’s St. James crude terminal, where the Bayou Bridge pipeline, if built, will end. ©Julie Dermansky (Flight made possible by SouthWings)

Even if Joseph can’t stop the pipeline, the battle against it is shining a light on the grave injustices his community is already facing. He is eager to show anyone around St. James, so others can see and hear for themselves what his community is dealing with. He doesn’t expect to shut down industry there, but ultimately he wants the companies to buy out everyone who wants to leave the area — St. James has around 1,000 residents total — because he says no one will be safe after all the pending industrial developments are completed.

He hopes the lawsuit will give pause to the other state and federal agencies yet to decide on Energy Transfer Partners’ remaining permits for the Bayou Bridge pipeline. The company has pending requests for a water quality certificate from the Louisiana Department of Environmental Protection and a permit from the U.S. Army Corps of Engineers.

What Joseph sees going on around him reminds him of a lesson from the Bible, he says: “The love of money is the root of all evil.”

He wonders now if the love of money is so strong that industry leaders and politicians are willing to let people die in order to get it. Not if he can help it, he told me.