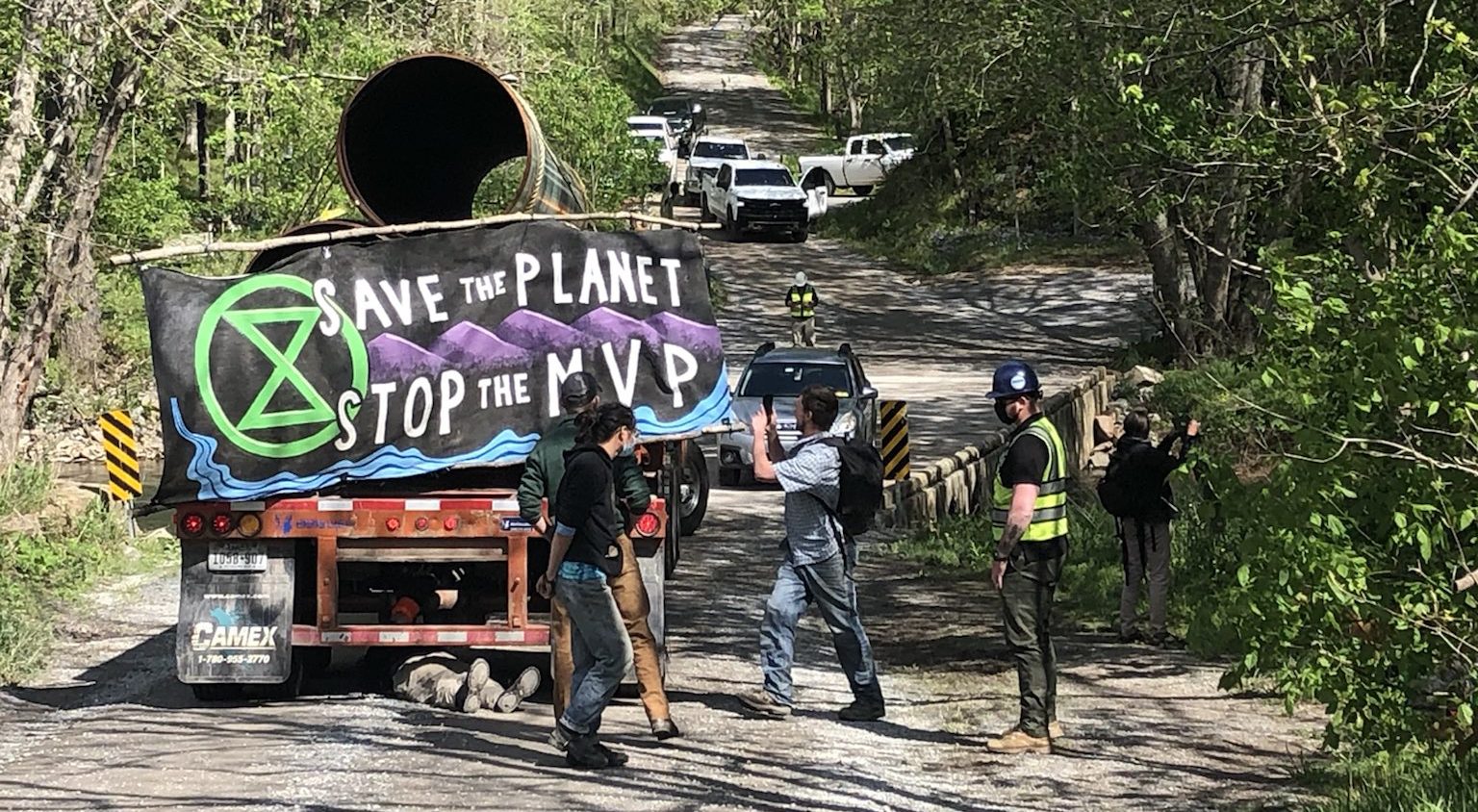 Maybrook, VA — On Friday 4/30/21 at 10:30 AM, Mountain Valley Pipeline protester Thomas Adams blocked a pipe truck just before it crossed a bridge over Sinking Creek in Giles County, and locked himself to the underside of the truck. The bridge is less than two miles away from the site where the pipeline is slated to cross the creek (although MVP currently lacks the permits to do so). A rally of over a dozen people gathered to support Thomas at the scene. Signs and banners on site read, “Save the Planet, Stop the MVP,” “MVP Just Give Up,” “Not Here, Not Anywhere,” and “Doom to the Pipeline.”

At 1 PM, after 2.5 hours blockading the pipe truck, Thomas was extracted and arrested. Another person on site, Molly, who had been at the support rally, was also arrested. Both are being held without bond. According to the New River Valley Regional Jail, Thomas and Molly’s charges — after 2.5 hours of a nonviolent blockade — are felony kidnapping (abduct by force without justification), felony larceny (unauthorized use of auto worth > $200), and misdemeanor riot/unlawful assembly (obstruction of free passage). Both are scheduled to be arraigned on Monday.

Thomas Adams, Montgomery County resident, hydrologist, and elected Director of the Skyline Soil and Water Conservation District stated: “Many will ask: why have I chained myself to a truck carrying pipe for the Mountain Valley Pipeline? I had no choice.

“I know what looms before us if we continue down the path with our obsessive use of fossil fuels. As a scientist and engineer who has been active in the field of water resources and hydrometeorology in the U.S. and internationally, working on issues related to climate change and global warming, I believe the science. The science is unequivocal. The consequences stemming from our use of fossil fuels and atmospheric loading of greenhouse gasses (GHGs) from anthropogenic emissions are dire. It is not hyperbole to say that we are in the midst of the collapse of global ecosystems. Scientific studies show this is happening now. This necessarily implies the death of hundreds of millions, if not billions, of humans as a direct result of global atmospheric warming. […] I have committed no crime. I would have committed a crime against humanity had I sat as an idle bystander, letting the greed of political and corporate forces advance — politicians in the Commonwealth of Virginia are in the pockets of corporate America. […] WE ALL HAVE NO CHOICE!” Thomas’ full statement is attached separately.

Sinking Creek is one of hundreds of streams and wetlands for which MVP is missing permits to cross along the Virginia portion of the pipeline route. Since the Nationwide 12 permit for MVP (which would have given the pipeline blanket approval for most water crossings) was suspended in 2018 by the U.S. Fourth District Court of Appeals, the company is now seeking individual Section 401 and 404 water quality certifications for each crossing. MVP has again asked the Federal Energy Regulatory Commission (FERC) to rewrite their Certificate of Public Convenience and Necessity to change water crossing methods from open trenching to boring for 181 waterbodies. Earlier this week, the North Carolina Department of Environmental Quality’s (NC DEQ) Division of Water Resources (DWR) reissued and supplemented their denial of MVP’s request for a 401 Water Quality Certification and Jordan Lake Riparian Buffer Authorization for the MVP Southgate project (the 70 mile extension of the original proposed route).

David Yoltan, a landowner in GIles County who came to show his support, stated: “We’ve been faced with this nightmare for the last five years. Why are they proceeding if they don’t have the permits? It’s very, very upsetting and disturbing to me to have to listen to heavy equipment all day long, every day — they have blasted near my house and rattled the windows and bookshelves… we just feel bullied and ignored. As far as following regulations, those regulations were not created to address a project of this size through this kind of terrain, it cannot be done safely, and it has been shown by the violations that have happened. They need to stop, the governor needs to step in, the state water control board needs to step in, there are so many reasons not to put this pipeline in.”

The Mountain Valley Pipeline is a 42-inch diameter, 300-plus mile, fracked gas pipeline that runs from northern West Virginia to southern Virginia, with a proposed 70-mile extension into North Carolina. Staunch resistance to the pipeline has existed since its proposal in 2014. The MVP contributes to climate change, increases demand for natural gas (and as a result, fracking), and is entrenched in corrupt political processes. It endangers water, ecosystems, and communities along its route. The failing pipeline project is years behind schedule, several billion dollars over budget, and is still missing key permits from numerous agencies including FERC, the U.S. Army Corps of Engineers, the VA and NC Departments of Environmental Quality, and the WV Department of Environmental Protection. These missing permits include the authority to cross streams, waterways, and the National Forest. Until recently, MVP was unable to work in Giles County based on its proximity to the Jefferson National Forest. In early April, the Virginia Council on Environmental Justice asked Governor Northam to issue a moratorium on all new fossil fuel projects.

Meanwhile, Acre and Wren are still being held in jail with no bond for misdemeanor charges after their extraction from the Yellow Finch tree sit, which blockaded the path of the Mountain Valley Pipeline for 932 days.