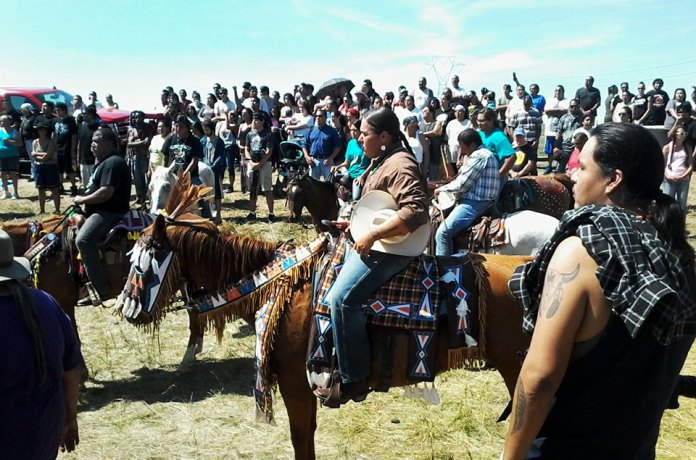 Above: Since Thursday, at least 142 activists have been arrested while protesting against the North Dakota oil pipeline.

Under arrest for protesting against the construction of the Dakota Access pipeline, many activists accused the police of holding them inside cages that appeared to be dog kennels with each detainee receiving a number written on their arm. Although law enforcement agencies routinely arrest political and environmental activists, they have no constitutional right to psychologically antagonize their prisoners by marking them like Holocaust survivors.

Since Thursday, at least 142 activists have been arrested while protesting against the North Dakota oil pipeline. On Friday, Sen. Bernie Sanders wrote a letter asking President Obama to intervene on behalf of the Standing Rock Sioux reservation.

“The first priority must be protecting the safety of the peaceful protesters,” Sen. Sanders wrote. “That is why I urge you to direct the Department of Justice to sent observers to protect the protestors’ First Amendment rights to protest the pipeline. I also urge you to request that North Dakota Governor Jack Dalrymple remove the National Guard from the camp, as the military presence only threatens to inflame an already tense situation even more. Lastly, I urge you to direct the Army Corps of Engineers to stop construction within a mile between Highway 1806 and the Missouri River to help reduce tension.”

Sanders continued, “To my mind, the Corps should have never approved this project on an expedited basis in the first place. If completed, the pipeline will transport nearly 20 million gallons of crude oil every day, potentially threatening dozens of bodies of water, including Lake Oahe on the Missouri River. Since the Missouri River provides drinking water for 10 states and 28 tribes, a major spill from this pipeline could threaten the drinking water of millions of people. That is a risk we simply cannot afford to take.”

In an attempt to protect their tribal lands and drinking water, many protesters were shot with rubber bullets and pepper spray on Thursday as law enforcement officers dressed in riot gear also deployed audio cannons to disperse the crowd. According to the sheriff’s department, most of the arrested activists will be charged with criminal trespassing, engaging in a riot, and conspiracy to endanger by fire.

“It goes back to concentration camp days,” a protest coordinator named Mekasi Camp-Horinek told the L.A. Times. Detained along with his mother in a mesh enclosure without furniture and exhibiting numbers written on his left forearm, Camp-Horinek recalled, “It looked like a scene from the 1800s, with the cavalry coming up to the doors of the teepees, and flipping open the canvas doors with automatic weapons.”

Calling for a Justice Department investigation into police tactics, Standing Rock Tribal Chairman David Archambault II told Reuters on Saturday, “Let’s reroute the pipeline. It doesn’t have to put our water at risk.”

Since August 10, more than 400 protesters have been arrested, including actress Shailene Woodley and Democracy Now! journalist Amy Goodman. The rioting charges against Goodman were dismissed earlier this month.