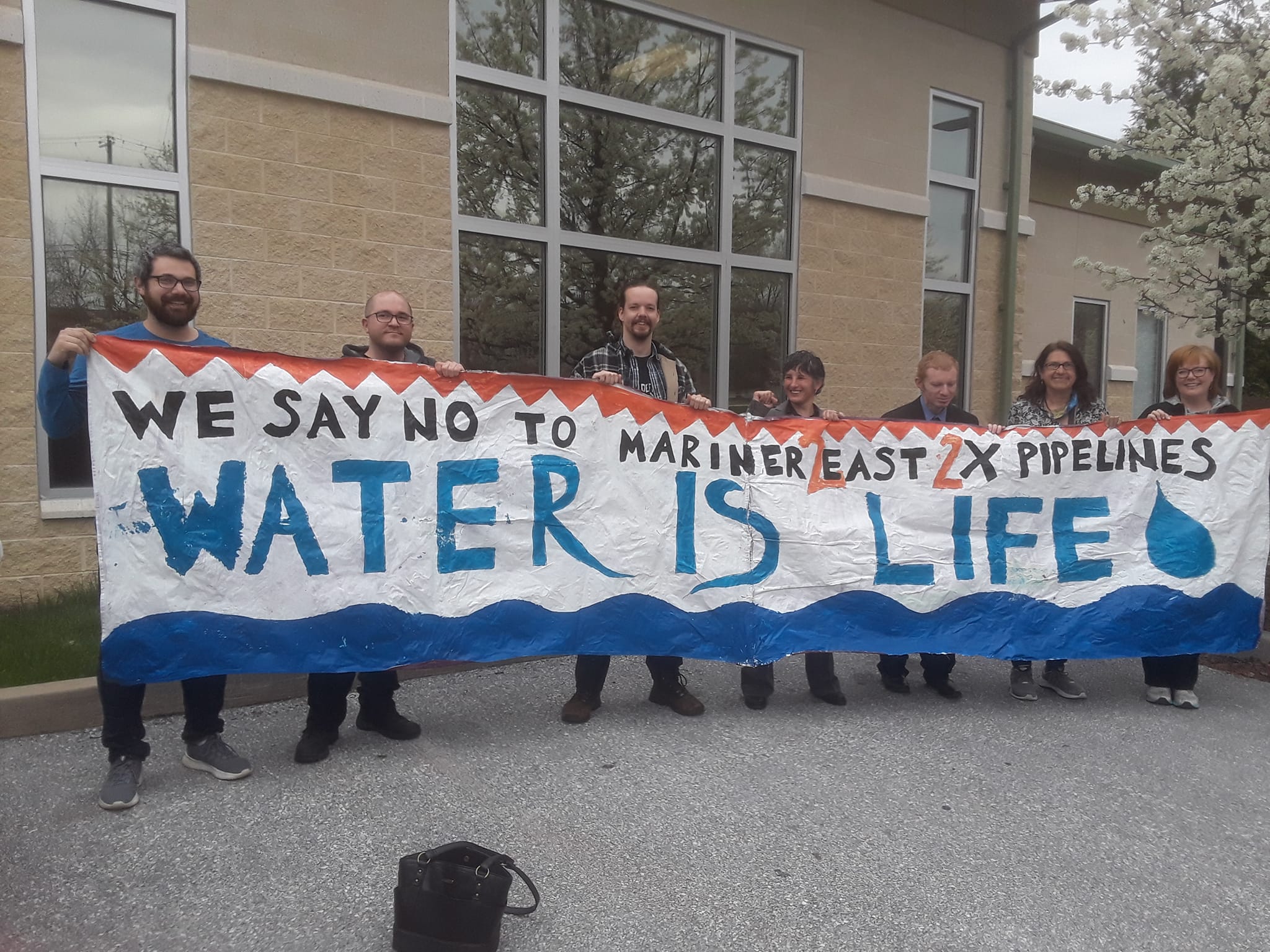 While the PA Governor and Attorney General continue to delay halting construction and cleaning up toxic spill in Marsh Creek, local residents take matters into their own hands with direct action and win in court today. “We had no choice but to resort to peaceful protest on an active construction site to raise awareness of the dangers that have not been addressed by the responsible government agencies.”

Former Public Health Commissioner of Philadelphia, Dr. Walter Tsou, said, “Christina and Connor asked every politician to help protect their families from contaminated water or the threat of a pipeline blast to no avail.  By taking a stand against the pipeline, they are the ones who are showing courage against formidable odds.” Tsou served as an expert witness in this case. He testified to the probability of negative consequences from the pipeline and he revealed facts regarding the public health threats of climate change and shigella toxin. Shigella is a pathogenic bacteria that can spread person to person, or via contaminated water. It comes from the fecal matter of livestock, such as cow manure, and that manure can enter water sources through improperly planned soil drainage. Cases of local illness may be linked to shigella entering drinking water due to Sunoco|Energy Transfer drilling through a local farm field. Tsou also served as the President of Physicians for Social Responsibility  Pennsylvania.

Another expert witness, Dr. Yuri Gorby, a research scientist specializing in the field of Geomicrobiology from the U.S. Geological Survey and the U.S. Department of Energy submitted testimony to this case that industrial or geotechnical activities can negatively affect surface and groundwater.

The proceedings were watched with cheering support from families across Pennsylvania. Attorney Read used the argument § 503. Justification generally (a) General rule. Conduct which the actor believes to be necessary to avoid a harm or evil to himself or to another is justifiable if: (1) the harm or evil sought to be avoided by such conduct is greater than that sought to be prevented by the law defining the offense charged.

Residents across Pennsylvania say the pipeline project is non-essential to the local utility system — it is slated to take fracked gas liquids out of the US to the overseas market, where it will mostly be made into plastics. Before reaching the Marcus Hook shipping port, the line traverses 350 miles of personal and public property, 1,227 stream crossings, 570 wetland crossings, and 11 pond crossings; 337 of these crossings disturb what DEP refers to as “special protection” waters. In addition, there are 129 exceptional value wetlands being crossed, including Marsh Creek Lake, a drinking water source for 1.75 million people.

“My mom said justice was served here today and I’m having difficulty disagreeing with her,” said Connor Young, one of the two defendants. “Today was a victory, we had a legitimate purpose in taking these hard steps to protect our community and it was recognized in a court of law that we were justified in our actions. This also reminds me of the injustices in the world yet to be corrected. This pipeline is still slated for operation, and that is the threat we took this action to ameliorate.  This pipeline and fossil fuel projects around the world must be shut down as part of a just transition to clean energy so that our community and every community can be free of the violence and pollution that cannot be separated from these projects.  There is a lot of work to be done yet, but days like this give me hope.  Solidarity with water protectors worldwide.”

Defendant “PK” DiGiulio said, “I am relieved and thankful that Judge Feldman ruled today we are not guilty. We feel vindicated because the judge recognized that, to no avail, we exhausted every reasonable option to ensure our health and safety were not being jeopardized by the Mariner East 2 Pipeline. Consequently, we had no choice but to resort to peaceful protest on an active construction site to raise awareness of the dangers that have not been addressed by the responsible government agencies. With Judge Feldman’s statement that we are in imminent danger it is our fervent hope that the responsible agencies will fully execute their legal obligation to ensure the health and safety of our communities.”

Attorney Ronald Read of Pittsburgh, who successfully argued the Necessity Defense, traveled across the state to defend Connor and PK in court. He stated modestly, “The Defendants in this case took direct action to protect their community.  They did the hard work, I just asked the right questions to show the judge that their actions were legitimate.”

In October 2021, the PA Attorney General’s office announced 48 criminal charges and 1 felony against ETP for environmental crimes. The criminal charges include illegally releasing industrial waste at 22 sites in 11 different counties across Pennsylvania; polluting water in residents’ homes; and causing the closure of Chester County’s 535-acre Marsh Creek Lake, due to a 28,000-gallon fluid spill into the recreational lake. Although the company has yet to clean up the spill, they paid $4 million to the Department of Conservation and Natural Resources (DCNR), a pittance compared to the $2.5+billion in revenue the corporation expects to pull in from the pipeline project.

Link to VIDEO after court