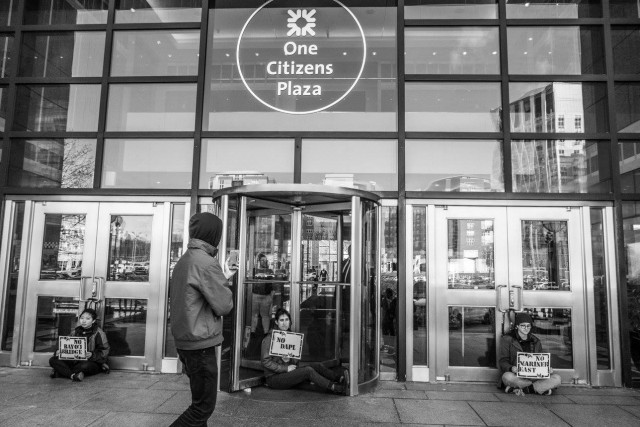 Two people used a series of bike locks to lock their necks to two sets of doors, while another person used their body and several door stoppers to block a revolving door. The action follows the February launch of the “Shame On Citizens” campaign which calls attention to Citizens Bank’s role in a $2.5 billion line of credit to Sunoco Logistics, a pipeline company behind several controversial projects, including the Dakota Access Pipeline. Citizens contributed $72.5 million to this line of credit.

Sunoco Logistics is in the process of fully merging with Energy Transfer Partners. Together the companies are backing several contested projects including the Dakota Access Pipeline, Trans-Pecos Pipeline in Texas,, the Bayou Bridge Pipeline proposed for Louisiana and the Mariner East Pipeline in Pennsylvania. Community organizers resisting these projects issued statements in support of the action at Citizens Bank.

“We will fight their Bayou Bridge oil pipeline at every level. It’s time for institutions like Citizens Bank to wake up and cut their financing to these dangerous pipeline projects”. Cherri Foytlin, an organizer with Bold Louisiana. (full statements below)

On February 8th 130 people rallied outside of the Citizens Bank headquarters building to protest the Bank’s involvement with the Dakota Access Pipeline. Prior to the rally Citizens Bank denied entry to local organizers and an indigenous activist who hoped to speak to management about the issue. On February 15th a group of community members hand delivered a letter to Citizens Bank executives urging them to cut their ties with Sunoco Logistics. The FANG Collective reports that this letter has gone unanswered.

“We will keep taking action targeting Citizens Bank until they cut ties with Sunoco Logistics. We tried multiple times to directly negotiate with Citizens, only to be ignored. We have no option but to take action.”  – Nick Katkevich of the FANG Collective.

Organizers of the Shame on Citizens Campaign are urging people to commit to close their accounts with Citizens Bank, with several events at local branches being planned for later this month.

Statement from Krystal Two Bulls, who is Oglala Lakota and Northern Cheyenne, and has been organizing resistance to the Dakota Access with the Global Solidarity Campaign:

“The camps at Standing Rock have been raided. The longest standing camp, Sacred Stone Camp has been raided. We still stand. We continue to fight. From the start, we have said this fight is larger than Standing Rock. It is about more than this one pipeline. It is about protecting the Water for the future generations of all People. It is about dismantling and taking back power from a system that prioritizes profit over human lives. We must put an end to this. We have to continue to hit these corporations where it hurts, their money!’

Statement from Cherri Foytlin, an indigenous and latinx organizer who has been organizing resistance to the Bayou Bridge Pipeline with Bold Louisiana:

“If Energy Transfer Partners and Sunoco Logistics thought that Standing Rock was something, wait till they come to the Bayou. We will fight their Bayou Bridge oil pipeline at every level. It’s time for institutions like Citizens Bank to wake up and cut their financing to these dangerous pipeline projects”.

Statement from Deirdre Lally, who has been organizing resistance to the Mariner East Pipeline with Juniata Watershed People Before Pipelines:

“In Pennsylvania, Sunoco Logistics is preparing to cut through 17 counties for a natural gas liquids pipeline called the Mariner East 2, set for export overseas.  After strong resistance from residents and environmental groups, Sunoco had to re-apply for their construction permits three times.  Even still, they have mapped less than half of the drinking water supplies they will be building this pipeline through, including private drinking water wells.  The impact on Pennsylvania’s wetlands is enormous and will take many generations to recover from.  Any investments in Sunoco is an investment in the sure destruction of safe drinking water and a functional ecosystem in Pennsylvania.”