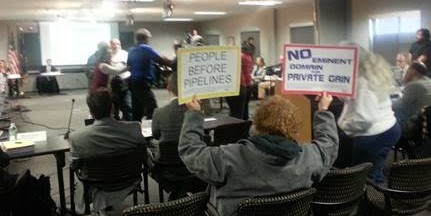 “My friends and neighbors in Butler County have already been harmed by the reckless practices of the gas industry and the enablers in Pennsylvania’s government. This rubber stamping farce has done nothing but increase the likelihood that the destruction will continue,” said Michael Bagdes-Canning.

In total, over twenty people from across the state participated in the disruption while more protested outside. As they took the center of the meeting space and chanted that they were “the peoples’ task force,” capital police arrested seven for disorderly conduct.

In total, over twenty people from across the state participated in the disruption while more protested outside. As they took the center of the meeting space and chanted that they were “the peoples’ task force,” capital police arrested seven for disorderly conduct.

The Task Force has consistently excluded voices of frontline community members. Most notably was when Scott Cannon was invited to be a part of the Task Force, and then the invitation was rescinded a few days later. More recently, the Task Force met on November 18th to begin finalizing the recommendations in their report just 4 days into the official comment period and without having heard from any impacted community members. When members of the public demanded to be heard, they were escorted from the room.

The protesters today carried a clear message, that the buildout of fossil fuel infrastructure — from the shalefields to the export terminals — is harming residents of the entire region. Instead of pipelines, protestors demanded that the Governor convene a task force to focus on renewable energy.

“The proposed massive and unprecedented buildout of fracked gas pipelines across the commonwealth makes us all front line communities. Every single county in the state will be impacted,” said Betsy Conover from Dauphin County near the proposed Mariner East pipelines.

“Quigley has ignored the context of the times and its zeitgeist. Since July when he convened the task force: Pope Francis delivered his encyclical with its moral imperative to addressing climate disruption to packed crowds in Philadelphia, KXL came to a screeching halt with President Obama’s pen, and the clarion bell to action was rung at the Paris Climate talks and resounded across the globe. Meanwhile in PA, Beetlebomb is taking up the rear in the horserace.”

“Our elected officials continue to put the interests of the gas industry ahead of the people,” said Diane Sipe, a resident of Butler County, an area where fracking and its related infrastructure is rife. “For the health and safety of our families and communities, we need to expose this task force as a ‘task farce’.”

The Governor’s Pipeline Infrastructure Task Force received increased public scrutiny in the past few months after the Public Accountability Initiative found that 92 percent of non-governmental members on the Task Force have industry ties.

Protesters at today’s disruption came from all across the region, including people who are fighting gas drilling in the shalefields, proposed transmission pipelines through their land, and export facilities to send liquefied gas products overseas. Despite coming from many different communities, the message today was clear: fracked gas infrastructure hurts us all.