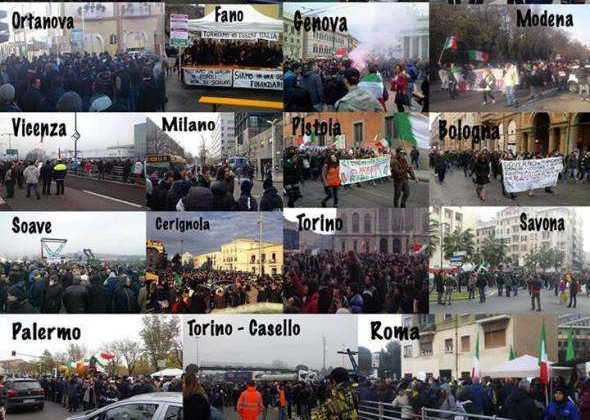 Pitchfork Protests All Over Italy

This time it took me by surprise. While all eyes are on the ‘eurorevolution’ in Ukraine, yesterday Italy was swept by a sudden outburst of civil unrest. The so-called ‘pitchfork’ movement brought people to the streets all over the country. There were heavy clashes with police in Turin.

So what is this movement? Who is behind it? What do they want? It’s hard to tell, because it seems to be very heterogeneous.

The movement was started by Sicilian farmers two years ago, it gained support by truck drivers, and lately by the impoverished middle class. In general, there is a growing feeling of discontent with the government, with austerity measures, with high taxes, the euro, and with unfair competition from chain stores and cheap Chinese products. Yesterday, many small shop owners closed in solidarity with the protest. Others who didn’t adhere were picketed and forced to close.

There doesn’t seem to be a clear leadership or any plans. A major impulse of the street protest comes from the far right and from neofascist groups. At the same time there was also an unlikely presence of fringes from the extreme left. I have never seen anything like that before, here in Italy.

Motorways were blocked by truckers all througout the country. Railway traffic was disrupted by protesters in Turin and Genoa. In Turin, clashes with police occurred in the central Piazza del Castello as demonstrators tried to storm the regional government building. Police responded with charges and tear gas. From the side of the protesters, the resistance was spearheaded by football supporters from Juventus and Torino. Again, an unlikely brotherhood.

In the early afternoon, something curious happened. After the clashes, demonstrators in Turin challenged the police officers to take off their helmets and lay down their shields. ‘You are underpaid. You are with us!’ someone shouted through a megaphone.

The commander in the field was the first to comply. After that, the others followed suit. The crowd reacted with a wave of cheers. A similar gesture of solidarity from the side of police occurred in Genoa and Bolzano. Spontaneous acts of fraternization with police were recorded in other parts of the country as well.

Today, peaceful actions and road blocks of the Pitchfork movement continue. Some protesters have already threatened that all hell will break loose if the grand coalition of Enrico Letta will survive tomorrow’s vote of confidence.