Google is blocking our site. Please use the social media sharing buttons (upper left) to share this on your social media and help us break through

Last year the world lost an area of tree cover the size of New Zealand, according to satellite data. That’s around 29.7 million hectares (297,000 square kilometers) – and was a 51 percent jump over 2015.

The tree cover loss data came from the University of Maryland (UMD) and were analyzed by World Resources Institute (WRI). While the data don’t just represent deforestation (they also lump in tree plantation harvesting), the analysts attribute most of the tree cover loss to human impacts affecting forests such agriculture, logging and mining.

But why the big jump in tree cover loss from 2015 to 2016? The analysis points specifically to fire as the primary culprit. The data indicate big upticks in fires around the world, both in areas where fire naturally occurs — like northern Alberta, Canada — and wetter areas of the tropics where fire is (or perhaps more accurately, used to be) a rare phenomenon. 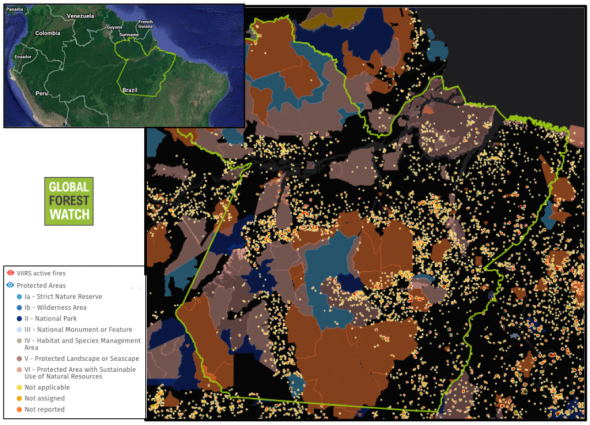 Researchers believe many of these fires were set intentionally by people seeking to clear land for agriculture and other developments. Compounding the problem was an unusual dryness in the region, the result of climatic shifts like El Nino.

“At risk is maintenance of the hydrological cycle and the Amazon as a system,” Thomas Lovejoy, an ecologist and Amazon expert at George Mason University, told the Washington Post last year. “When the drought is combined with more people using fire AND more people who are inexperienced using fire, the opportunity for things to get out of control gets considerably larger.”

Indonesia also saw an increase in tree cover loss last year. The WRI analysts attribute this in part to the lingering effects of the wildfire crisis that wracked the country (as well as downwind portions of mainland Southeast Asia) during the latter part of 2015 and resulted in an estimated 100,000 deaths.

Peatland draining and slash-and-burn agriculture are considered the primary causes of the 2015 fires. In response, Indonesia present Joko Widodo implemented a nationwide ban on peatland clearing in the hopes of heading off future catastrophic fires.

In addition to fire, the analysis points to logging and agroindustrial expansion as contributors to Indonesia’s tree cover loss. In particular, West Papua – which has so far avoided the large-scale conversion of its rainforests that has heavily affected other parts of the country – showed an uptick in clearing for oil palm plantations in 2016.

Together, the analysis found Brazil’s and Indonesia’s loss numbers amounted to more than 25 percent of the world’s 2016 tree cover loss. It also called out Portugal (which lost 4 percent of its tree cover in one year), the Republic of Congo (which experienced one of the largest Central African fires ever recorded), and Canada.

With the loss of forests comes the loss of valuable habitat for wildlife and ecosystem services for human communities. Trees are also big storehouses of carbon; if they’re destroyed, that carbon is released into the atmosphere, advancing global warming. Scientists worry that a warming world will, in turn, lead to more forest fires as once-moist tropical regions dry and fire seasons in northern temperate areas lengthen.

WRI’s analysis cautions that while 2016 has “record” levels of tree cover loss, initial numbers for 2017 indicate this year may be giving it a run for its money. Indeed, figures from the Brazilian government show more than 208,000 fires were recorded by October 5, putting 2017 on track to be a record year of fire activity. Of those fires, nearly half were detected in September alone.

“Recent blazes in Brazil, California, Portugal and elsewhere suggest that forest fires are not going away – indeed, they may only get worse as the planet warms,” the analysts write. “The large scale of forests affected by fire and other drivers in 2016 makes it clear that, now more than ever, we need to work together towards better forest management.”