Plowshares 7 Need Your Help As They Face Sentencing

As the coronavirus kills and terrifies prisoners around the world, the Kings Bay 7 anti-nuclear protesters and two drone war whistleblowers – Brandon Bryant and Daniel Everett Hale – are facing prison time.

These pending court actions can be seen as marking a moment in history when anti-drone war protesters join anti-nuclear war protesters in the group of Americans who remain inspired to actively oppose the creation and use of, particularly heinous weapons in the face of the wide acceptance of these weapons by the American public. Here is a summary of the status of the cases, and we urge you to write immediately to the judges on behalf of the Kings Bay 7 and Brandon Bryant.    The Kings Bay Plowshares7 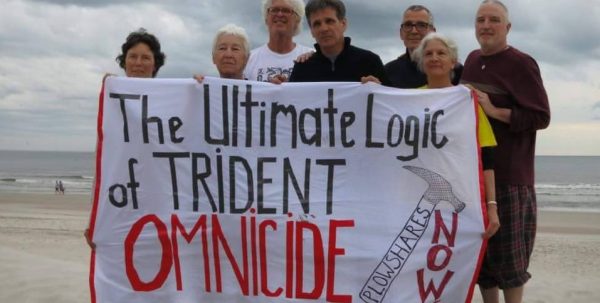 After a six-month delay, due in part to the Covid crisis, May 28 and 29, 2020 have been set by U.S. District Court Judge Lisa Godbey Wood for the sentencing of the Kings Bay 7, who were arrested on April 4, 2018, for their protest inside Naval Submarine Base Kings Bay, the homeport of the Trident nuclear missile submarines of the U.S. Atlantic Fleet.

Bill Quigley, who represented Elizabeth McAlister, said the judge does not have to follow the recommendations based on pre-sentencing investigations.  The recommended sentences differ based on the criminal histories of each person and interviews with each. All seven have already served time in jail, from a little more than two months for those who were released to go home to live under 8:30 p.m. to 7 a.m. curfews and up to the two years already served by Father Kelly. Because of the virus, the judge may deliver her sentencing decisions via video conferencing. As evidence of the Covid danger in jails, there are escalating protests around the U.S. calling for prisoners, particularly aging prisoners, to be released.

What You Can Do

First, the Plowshares 7 are urging that you sign this Petition calling for urgent reduction of the prison population in the face of the pandemic and that you support RAPP (Release Aging People in Prison) that advocates for the release of aging prisoners.

Next, PLEASE write to federal Judge Lisa Godbey Wood, at the address above, asking her to sentence all the defendants to time served.  Bill Quigley notes: “All judges read the letters people send them. They pay special attention to letters that are polite and clear.  They might help.” An attorney in a federal public defender’s office also suggests that “anyone who knows any of the individuals should add personal insights based on their knowledge of the person and the reason the person is deserving of a time-served sentence.”

Here is a sample letter to work from:

I am writing to implore you to sentence all the Kings Bay Seven nuclear weapons protesters to time served. Such a decision would recognize not only that the government has already exacted a penalty of various levels of confinement over the last two years, but that imprisonment of the defendants in the time of Covid 19, is a penalty that far exceeds the normal weight of imprisonment in terms of its impact on the emotional and physical health of the defendants.

Indeed, imprisonment during this pandemic endangers the lives of the defendants, none of whom present a danger to the general public and all of whom have devoted their lives to serving others. Should you believe you must impose a further penalty on the defendants, I ask that you consider home confinement.

Thank you for considering my request.

(Your name and address)

You can also contribute to the ongoing costs of supporting the defendants.  Checks may be sent to:

Donations can be made online at Isaiah project
Here are links that provide you with more information:Kings Bay Plowshares 2nd Anniversary Virtual Celebration 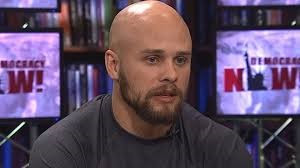 Brandon Bryant has been the foremost killer drone operator whistle-blower, offering us a path to enter the operational realm of drone killing that we would otherwise never have known in such detail. As has been previously reported in this bulletin and elsewhere, Brandon was arrested in February 2020 on the grounds that he threatened members of the Missoula, MT City Council over disagreements about housing costs and land development in the city. He was charged with one count of threats/improper influence in official and political matters, punishable by 10 years in the Montana State Prison and a possible fine of $50,000, and Judge Shane A. Vannatta set bail at $100,000.  In March, Brandon was released after he and his mother paid a $7,500 fee to a bail bonder. So far, about $5,000 has been raised on GoFundMe to help him and his mother with expenses related to his arrest. Because of the virus crisis, Judge Vannatta has moved Brandon’s trial date from April 27 to September 28.

What You Can Do

Here is a sample letter to Judge Vannatta: Honorable Shane A. VannattaDistrict Court200 W. BroadwayMissoula, MT  59802Re: Case DC-20-70 Dear Judge Vannatta: I am writing to implore you to dismiss all pending charges against Brandon Bryant. Mr. Bryant does not present a threat to the public, and, in fact, he has a history of speaking out on behalf of saving lives and improving the well-being of citizens of Missoula. Further, I believe that the prospect of a trial and possible imprisonment in this time of Covid-19 crisis is a much heavier, punishing burden than it would be normally, and it is a burden that Mr. Bryant should not have to bear. Thank you very much for considering this appeal. Respectfully, (Your name and address) Send the letter to Bryant’s defense attorney for forwarding to the judge.  She is: Robin HammondState Public Defender’s Office610 Woody StreetMissoula, MT 59802 And, you can contribute to assist Brandon and his mother’s legal fund. 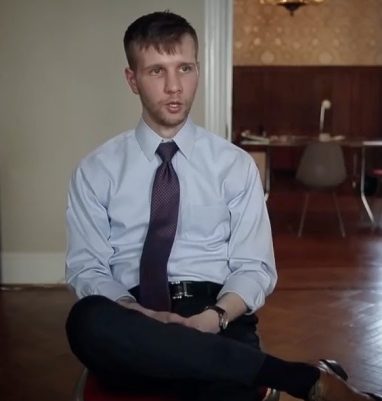 The most extensive operational description of the U.S. killer drone program that we have on the public record to date has been provided in government documents said to be released by Daniel Everett Hale to The Intercept. Daniel, a former intelligence analyst for the U.S. Air Force and National Security Agency and a former contractor for the National Geospatial-Intelligence Agency, was indicted on May 9, 2019, in U.S. District Court for the Eastern District of Virginia on five counts, four of them in violations of the Espionage Act.  The full indictment is worthwhile reading. Daniel’s trial date was set for late March 2020, but his attorney, Jesselyn Radak, of Whistleblower & Source Protection Program (WHISPeR) at Expose Facts, says that the Covid crisis has caused the judge in his case to postpone a status conference until May 8 when a trial date could be set.  However, she anticipates that the conference might be delayed and that the earliest a trial might be held is in September or October. Daniel is facing up to 50 years in prison and is now free on his own recognizance. The best way to help Daniel right now appears to be to sign this Roots Action petition and to contribute to his defense.

We close with two poems by James Ricks, grandfather, protester, and poet: 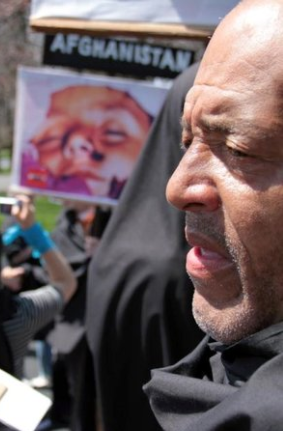 I stopped to think about things, about how they are, and it made me pretty mad. But…
I pushed through, my thoughts lost some heat, and then was pretty sad. But…
I know it’s all transitional. So, it made me wonder why. That as my thoughts and my
sadness deepened, that I began to cry.
Well, these thoughts collided, when I decided, that I had clearly seen a reason.
In a world where corruption is so kindly rewarded. The truth gets framed as treason.
And we try to be real, whenever we deal. And deal justly with what we’ve got. But…
We don&#39;t cry because we&#39;re crazy.
We cry because we’re not.

I’ve rested more than I’ve been tested.
But always felt I’ve done more than most.
After witnessing the Kings Bay Plowshares 7 arrest, confinement, and trial.
My comfortable perspective was instantly dissected, deconstructed, then discarded like burnt toast.

I watched the things that you did. Heard the things that you said.
You made me far too uncomfortable to just remain here in bed.
You threw a boulder into that pond, and the waves wash all over us.
You set the bar very high.
We will earnestly try.
To never, ever betray that trust.