Above: Take Shelter Coalition has conflict with police over homeless shelters. By Laura Seitz, Deseret News

In Salt Lake City, the Take Shelter Coalition set up an encampment here of about 80 people on Jan. 2 to enforce demands to end the brutal treatment of unsheltered members of the working class. The camp was located around the Salt Lake City-County Building in Washington Square.

The Salt Lake City Police Department in full riot gear assaulted protesters Jan. 5 with shotgun “flexible baton rounds” and hand batons, arresting 17 and issuing citations to 13. This is the second brutal attack by cops suffered by protesters in the city in recent months.

The largest shelter in the city for unhoused people, The Road Home, was closed Nov.  21 as temperatures dropped and months of subfreezing temperatures and storms lay ahead. While continuous protests have been underway since the shelter closure was announced, the encampment protest was the first to create an on-going physical presence of activists at a city government building.

Officials cite the opening of new resource centers as compensation for the closure of the large, centrally located shelter. But protesters point out that the new centers offer only a total of 400 beds, while the Road Home offered 1,100 beds.

A 2018 study indicated there are an estimated 2,876 unsheltered residents in Utah, showing the continuing failure of the capitalist state to address human needs. (tinyurl.com/qvznbu3)

The new shelters are located far from jobs, a free clinic and other important resources; transit money is needed to reach them. Unsheltered people without income are placed in a double bind — either break panhandling laws and risk fines of over $100 or ride transit without paying and risk fines of over $100 and incarceration in Utah county jails that have a high death rate. (tinyurl.com/vm6d4ao)

Anti-camping laws permit police to brutally destroy tent encampments independently constructed by unsheltered people, while beating and arresting occupants and destroying or confiscating their belongings, including cash, identification, food and warm clothing. At a recent vigil to commemorate unsheltered people who had died, Pamela Atkinson, a philanthropist, stated that there were 94 deaths in Utah related to homelessness in 2018.

Rents in Utah have increased every year for the past 10 years while wages remain stagnant. The website Building Salt Lake reported that workers making the state’s $7.25 an hour minimum wage would have to work a 101-hour workweek to afford an average two-bedroom unit.

In 2017, the state implemented a program called “Operation Rio Grande,” targeting the downtown neighborhood that surrounded two homeless shelters. Sponsored by former Speaker of the Utah House of Representatives Greg Hughes, the program allocated $34 million for additional jail cells and accelerated police repression of unsheltered people in the downtown area. 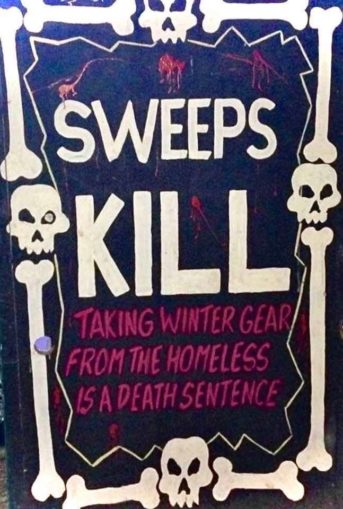 Demands for the unsheltered

Protesters’ demands include the opening of a new downtown shelter; the equivalent number of beds lost in the closure of the old downtown shelter, at a minimum, made readily available and accessible; a change in existing legislation to allow for new shelters to have more beds; no arrests, tickets or harassment of campers; and free public transit for all people who stay in shelters

While some media outlets accused protesters of being “outside agitators,” the facts are otherwise. Among the protesters are currently and formerly unhoused activists who have joined or who have gotten to know over several years the work of groups like Rose Park Brown Berets, Justice for Cody, Union for Street Solidarity and Utah Against Police Brutality. The efforts of these groups have been persistent, consistent and deeply engaged in community conditions for several years. Newer organizations have reached out to ones of longer standing, shared knowledge and skills, and brought renewed energy and militance to the struggle.

According to a statement issued by the Take Shelter Coalition, “The Coalition is made up of a wide range of local community organizers including Civil Riot, Democratic Socialists of Salt Lake, For The People, Freedom Road Socialist Organization, Justice for Cody, Just Media, Party for Socialism and Liberation, Rose Park Brown Berets, Union for Street Solidarity and Utah Against Police Brutality.”

Activists are not accepting the actions of the police forces. A follow-up protest demanding “Money for Housing, Not for War” brought attention to people being forced to sleep outside and campaigned against Chief of Police Mike Brown who authorized abuses.

The deeper concern of the protests is the way that capitalist forces criminalize the victims of the conditions that have been created by capitalism. While landlords raise rents as high as they can, business owners keep wages as low as they can.  No power in the capitalist system ensures that workers have the conditions they need to survive.

Reduced to living on the street, people become the targets and victims of state forces trying to beat them into invisibility —  unsheltered people are evidence of the crime of capitalism.

Only socialism can create a society in which workers’ needs come first. Socialism is the only system that can defeat capitalism in the struggle on behalf of workers’ needs.