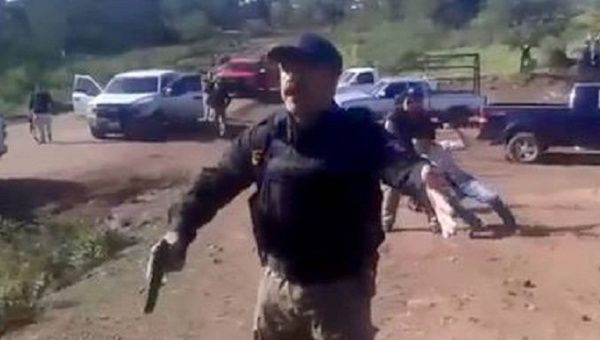 Police Break Up Sit-In Against Canadian Mine In North Mexico

Above Photo: An officer sent to break up the peaceful anti-mining protest in Guazapares, Chihuahua, Mexico on August 30, 2018. | Photo: Facebook

Canada’s Coeur Mexicana mining company had reached a deal with the people of Guazapares, but then proceeded to violate the terms of that agreement.

A group of 130 security officers from Chihuahua in Mexico broke up a sit-in protesting a Canadian mine, shooting into the air and arresting two of their leaders late last month.

Canada’s Coeur Mexicana mining company had reached a deal with the people of Guazapares, a small town in the Tarahumara highlands in northern Mexico, to use their territory and extract silver.

But since the company failed to comply with the agreement, the community has been campaigning against it for three years. The August 20 sit-in lasted for 10 days until security forces, under the command of right-wing Governor Javier Corral, showed up – without identification or arrest warrants.

In a video uploaded to social media, the officers can be heard saying they are not arresting the two leaders, Jose Luis Lozano Mosqueda and Ismael Vargas Gonzalez, but rather taking them to the Public Ministry to reach a deal.

Instead, the two were taken to the state capital and detained without charge for a week. A local judge then ordered the men’s release, after which it was revealed they had been tortured.

According to the Mexican Network of People Affected by Mining (REMA), the government gives carte blanche to mining companies to do as they please, criminalizing and even murdering the social leaders who oppose them.

“We recognize this is a battle in which the state almost always acts on behalf of the companies and under the pretext of modernity, progress and development, looking for a way to legitimize their illegitimate earnings they get from looting the people,” REMA said in a statement.

Mining companies frequently violate agreements, the law and the human rights of local communities, REMA said, noting the cases of Torex Gold in Guerrero, Blackfire in Chiapas, and Fortuna Silver Mines in Oaxaca, all of which are Canadian-owned.

REMA then called for solidarity with the people of Guazapares and warned communities across the country not to trust mining companies in their territories.