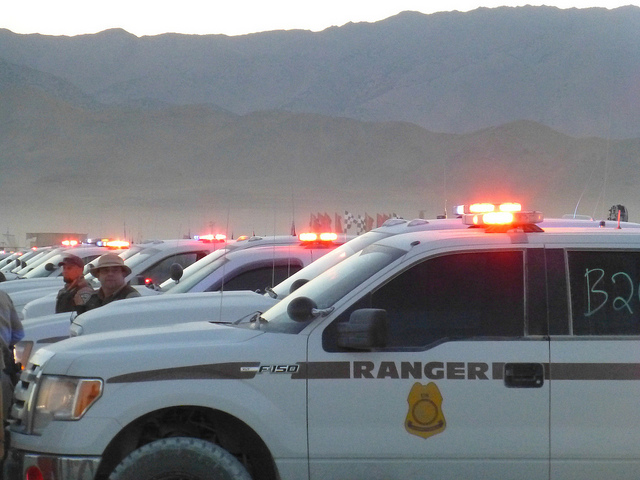 Police Crack Down On Burning Man, Unprecedented Show Of Force

One of the most peaceful and long running festivals in the country is under attack by police, with early arrivals experiencing a show of force like they have never seen before

Burning man and other similar art and music festivals generally have very peaceful and safe endings.  The most common dangers with any of these events is the fact that police like to target the people who attend them.

In recent years as the drug war police state has escalated, they have become more aggressive with these events, setting up illegal checkpoints, illegally entering onto private property without permission and senselessly using violence or threats of violence against nonviolent people.

The pigs are here. And uncommonly badge heavy. Earlier tonight, the #BLM pulled over El Couchino for a registration violation. In 18 years on the playa, I’ve never seen a more aggressive police presence than what’s been going down today. Deeply upsetting, outrageous stuff. One DPW member was issued a $275 ticket for urinating on the playa, and threatened with being forced to register as a convicted sex offender. (a note for people not familiar with Burning Man, the “Playa” is what Burning Man attendees or “Burners” call the land that this event is held on.) I suspect this is fallout from the lawsuit BMORG won against the BLM earlier this year. Whatever the cause, know this: Law enforcement is going to be VERY AGGRESSIVE at Burning Man this year. Keep your shit as right as you do back in the world. Don’t give them any excuses. Be extremely cautious, and MAKE SURE TO TELL YOUR FRIENDS. Things are changing. #BM2013 #LEO #police IF YOU DO GET STOPPED: Make sure to file an incident report with Burning Man. And before you get here, LEARN YOUR RIGHTS. [1]

In response to this unprecedented show of force, volunteers and workers nearby are calling for a general strike, with some of them organizing and refusing to set up the festival until the police promise to keep off the playa and let the Burning Man crew handle security inside the event.

In a recent interview a spokesperson for the group “Reform In Our Time” said that:

“Our demands are simple: We want law enforcement excluded….. The problem is a huge growth in outside law enforcement officers invading the playa, not the money it costs. We would really appreciate them if they stayed outside and only came in when we really wanted them to.

If the cops would leave their badges and guns at home and just be burners like everyone else in BRC, we’d welcome them just like we welcome anyone else. We’d even build them a Donut Camp!  We’re not against cops necessarily, we just don’t want outsiders doing law enforcement in our city. We have everything we need to take care of it ourselves without any outside help!”[2]

Last week at a conscious music and arts gathering in Ohio called “Rootwire” police invaded the property and arrested or fined 80 people for nonviolent crimes.[3]

[1] Dispatch from Black Rock City: “The pigs are here” at Burning Man –BoingBoing

JG Vibes is an Intellihub.com investigative journalist and staff writer. He is also the author of “Alchemy of the Modern Renaissance”, an 87 chapter e-book and is an artist with an established record label.