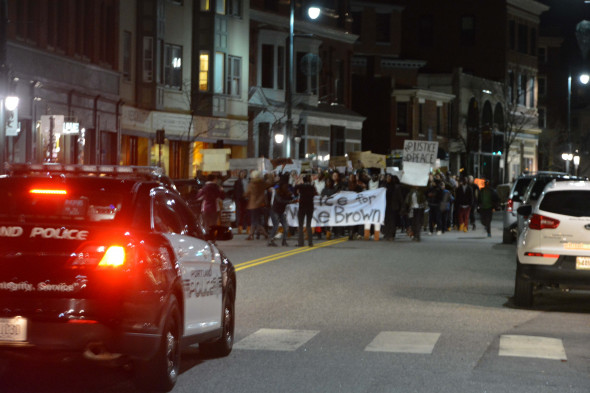 Civil rights advocates characterized those shootings as evidence of discriminatory policing. But the arrests of the protestors in Portland — and the criminal proceedings that have followed — also raise questions about racial and religious discrimination in the criminal justice system.

A tweet thread posted Wednesday laid out troubling details about the ongoing case.

DOES ANYBODY KNOW WHATS HAPPENING TO BLACK MUSLIM FEMMES IN PORTLAND MAINE?! A thread

— I.D (@idfinite) April 5, 2017
Around 10:00 p.m. on July 15, 2016, Portland police moved in on protestors gathered at an intersection, arresting 17 people who had reportedly “formed a circle” and led chants for three hours. Police Chief Michael Sauschuck described the arrestees as “ringleaders” who wanted to be detained, The Forecaster reported.

— I.D (@idfinite) April 5, 2017
Thomas Hallett, a defense attorney representing one of the protestors, told ATTN: that Portland police began arresting black protestors first — and it was only after white protestors accused them of racial discrimination that officers started arresting white protestors as well.

The jail came under fire in August after it released photos of two other black Muslim women without their hijabs. Department policy requires Muslims wearing head scarves to take two mugshots — one with the covering and one without — but it also stipulates that photos of Muslims without their head scarves will not be released.

Activists called the decision to release the photos “a form of public shaming” and “a violation of their First Amendment religious rights.” Cumberland County Sheriff Kevin Joyce apologized for releasing the photos in September 2016, The Portland Press Herald reported.

Courthouse records show that the five black protestors received more charges than the dozen white protestors who were arrested.

“[A]ll of the black people received either three or four charges, 11 of the 12 white or non-black people received two charges, and only one white individual faced three charges,” Alternet reported. “The women whose mugshots were wrongfully released are black and are among those hit with a greater number of charges.”

AFTER MONTHS OF HEARINGS ARRESTEES PLEAD NOT GUILTY AND WERE GIVEN A NOTGUILTY FILING OF 6 MONTHS + COURT ORDERDED RESTORATIVE JUSTICE BUT..

— I.D (@idfinite) April 5, 2017
On Jan. 26, the 17 protestors reached a tentative deal with the district attorney’s office, under which they would plead guilty to violating a city ordinance on disorderly conduct, pay a $200 fine and $140 toward a victims fund, and agree to meet local law enforcement and talk about the protest as part of a “restorative justice program,” according to The Portland Press Herald. In turn, the court would dismiss the charges after six months.

Restorative justice is “a movement to offer an alternative to retributive justice and its emphasis on punishment and separating offenders from society” that involves “giving voice to victims, having offenders accept accountability, and giving communities affected by crimes ways to heal.”

THE D.A’s OFFICE WASNT DONE WITH THE SHENANIGANS AND SHOWED UP TO THE RJ SESH KNOWING ARRESTEES LEGAL COUNCIL WOULD BE ABSENT

— I.D (@idfinite) April 5, 2017
Then, at a restorative justice hearing on Monday, the case took a surprising turn.

Justice Paul Fritzsche, who was presiding over the meeting, took issue with Hallett’s cross-examination of Deputy District Attorney Jennifer Ackerman and got in a verbal argument with him. Hallett was questioning Ackerman over her alleged attempt to confer with protestors without formally notifying the defendants’ attorneys — a breach of judicial protocol as far as he was concerned.

But the line of questioning apparently upset Fritzsche, who said Hallett was “being such a difficult attorney” during the hearing. The courtroom drama seemed inappropriate, and so the attorney asked Fritzsche to recuse himself. The judge did just that, which the case up in the air. A hearing is currently being scheduled to determine how to proceed, and that could involve anything from a new criminal trail to a dismissal of the charges.

DO YOU KNOW WHAT THAT MEANS? THATS A MAJOR ETHICS VIOLATION AND IS IMPERMISSABLE!

— I.D (@idfinite) April 5, 2017
“As far as we are concerned, today is a testament to our resilience and furthers our resolve to continue to fight for black lives, make sure our voices are heard and normalize participation in direct action in response to state sanctioned violence and white supremacy,” the Portland Racial Justice Congess, a civil rights group that organized the 2016 protest, said in a press release Monday. “Today and everyday we affirm that black lives matter.”

“Racism is a strong term to me,” Hallett said when asked whether he felt discrimination played a role in this case. But he noted that Maine was the “whitest state in the United States” and said he doesn’t believe “people here can possibly understand the black experience.”