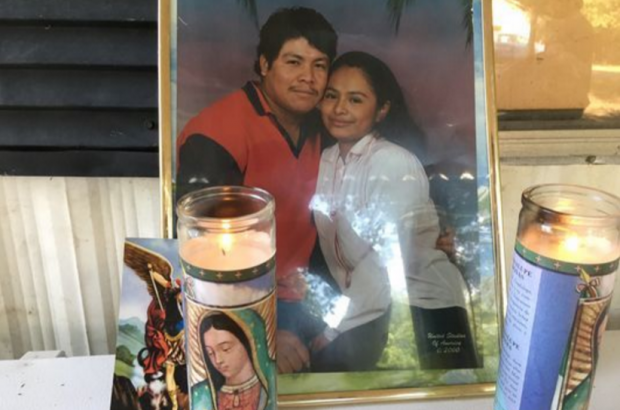 Despite having the correct address printed on the arrest warrant, Mississippi police officers recently arrived at the wrong house and fatally shot the suspect’s neighbor through his front door. Although officers claim the man had been armed and refused commands to drop the gun, witnesses assert that he was unarmed and had been shot without warning.

Shortly before 11:30 p.m. on Sunday, Southaven police arrived at 5878 Surrey Lane to serve an arrest warrant for a domestic abuse suspect named Samuel Pearlman. Earlier in the evening, Pearlman had been accused of choking his girlfriend at a Citgo gas station.

Instead of approaching 5878 Surrey Lane, the officers mistakenly went across the street to serve the warrant at the wrong address: 5881 Surrey Lane. According to police reports, Ismael Lopez, 41, prepared to ambush the officers by cracking open his front door while aiming a gun at them.

During a press conference on Monday, District Attorney John Champion declared that two officers arrived at the wrong address to serve the arrest warrant when Lopez’s dog, Coco, ran through the open front door in an aggressive manner. Reportedly noticing Lopez standing in the open doorway with a rifle aimed at them, the officers opened fire at his pit bull and immediately ordered Lopez to drop the weapon before they shot him to death.

But according to neighbors and Lopez’s wife, none of the witnesses heard the officers issue any commands or warnings before the shooting. Three recent bullet holes in Lopez’s front door also provided evidence that the door was either closed or partially closed when the officers gunned down Lopez in his own home. Although a .22 caliber rifle was located in the front room, the weapon was found on the couch with no bloodstains on it.

“There’s been lots of talk about a series of verbal commands, saying my client had a gun. The evidence doesn’t suggest that,” asserted Lopez family attorney Murray Wells. “His wife denies that she heard any instructions from police. One neighbor, whose bedroom is fairly near the front of the house, didn’t hear verbal commands.”

Neighbor Nicholas Tramel, who lives near Lopez’s residence, asserted that he did not hear the officers issue any orders before hearing the gunshots. Tramel told reporters, “I didn’t hear yelling.”

“There was a gun on the premises, but the man did not have the gun with him when police shot him,” Wells told NBC-affiliate WMCA. “They’ve been in that home for 13 years. The only time the police had ever been there was when they had been robbed. No criminal history whatsoever. A long-standing employee of the city of Bartlett, mechanic. Loved in the neighborhood.”

According to Champion, the Mississippi Bureau of Investigation is looking into the fatal shooting that left an innocent man dead because officers served an arrest warrant at the wrong address. Champion also pointed out that the officers were not wearing body cameras during the incident.

Instead of immediately turning himself in and facing the domestic abuse charges, Pearlman posted a video on Facebook on Tuesday afternoon claiming his innocence. Pearlman stated, “I haven’t hurt her. She’s the one who slapped me.”

In June 2012, the Evansville SWAT team broke into the wrong house, detonated flashbang grenades, and arrested an innocent grandmother accused of posting anonymous internet threats against the Indiana police department. After the police arrested a man who had been accessing the innocent family’s internet connection, the City of Evansville paid $60,000 to settle a lawsuit filed by the Milan family.

Last year the family of Bounkham “Bou Bou” Phonesavanh settled for $3.6 million after a SWAT team in Georgia threw a flashbang grenade into the 19-month-old’s crib, leaving him seriously wounded and later placed in a medically induced coma. In May 2010, a Detroit SWAT team tossed a flashbang grenade into the wrong apartment before killing 7-year-old Aiyana Stanley-Jones by shooting her in the head as she slept on the couch next to her grandmother.