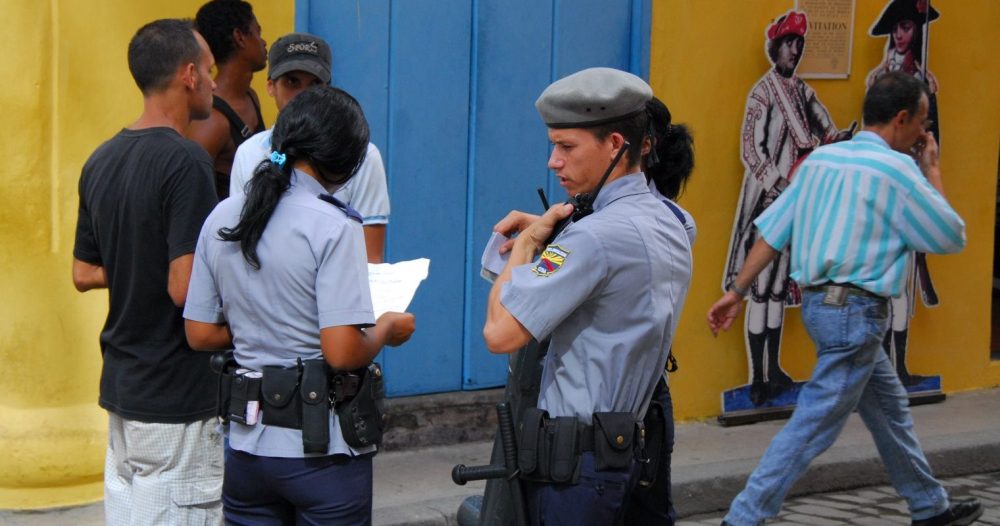 Above photo: Police in Cuba from Croft’s Wanderings.

A group of muscular cops carrying semi-automatic pistols and batons slowly move through the crowd at the end of an outdoor salsa concert. My friends and I have a bottle of rum, and I think for sure the cops will confiscate it, and maybe even arrest us.

Instead, the cops motion for us to drink up, and we quickly comply. They confiscate the glass bottle so it can’t be broken and used as a weapon.

This incident took place in Havana some years ago, and it tells a lot about what constitutes good policing. The cops were interested in preventing crime, not compounding it.

The socialist economy means Cuba doesn’t have extremes of wealth and poverty. I’ve visited the homes of high-ranking government officials who live in middle-income neighborhoods.

Contrary to the image of brutal and repressive communists, police in Cuba offer an instructive example for activists in the United States. Police live in the cities they patrol. They generally treat citizens with respect. As I documented in my book Dateline Havana, police beatings of criminals are rare and police murders are nonexistent. Cuba has one of the lowest crime rates in Latin America.

The ongoing protests for Black lives in the United States have forced an unprecedented national debate about the role of policing. Should police departments be defunded and that money be diverted to help poor communities? Should the police be abolished altogether?

Cuba has wrestled with policing issues since the 1959 revolution. The government, while certainly having its share of failures, has created a system of community-police interaction that reduces crime without reliance on brute force.

Crime-fighting in Cuba begins with a social safety net, which provides every Cuban with free education, free health care, and subsidized cultural events. Cuba doesn’t suffer from the scourges of homelessness and cartel-instigated drug addiction, despite traffickers’ regular attempts to smuggle drugs into Cuba from Florida.

The socialist economy means Cuba doesn’t have extremes of wealth and poverty. I’ve visited the homes of high-ranking government officials who live in middle-income neighborhoods. I have met police officers who lived in a modest apartment complex in the same neighborhood they patrolled.

Cuba uses community pressure to discourage crime. The Committees for the Defense of the Revolution (CDRs) were originally set up in the early 1960s to root out U.S.-backed counter-revolutionaries. Nowadays, the CDRs promote public health and act as neighborhood watch groups.

Humberto Carillo Ramirez, a national CDR leader, told me in a radio documentary that local residents often know who the criminals are.

“If a family isn’t sending their kids to school or if a young person isn’t working and is getting into trouble . . . we meet with them,” he says. “We live on [their] block . . . We explain why it’s bad for the country and we also explain the severe legal consequences for them.”

When residents are convicted of crimes, CDR members visit them in jail. “We want to . . . reincorporate them in society after they get out,” Carillo says.

In the early 1990s. Cuba faced a massive economic crisis brought on by the collapse of the Soviet Union and intensified by U.S. efforts to overthrow the government. Cubans faced severe shortages of gasoline, food, and electricity. Starting in 1996, the nation saw a sharp increase in home burglaries and street assaults; there was even an attempted armored car robbery.

“We need different community entities for different tasks that are responsible for safety and wellbeing of the neighborhood.”

By U.S. standards, crime in Cuba remained light, but it was more than Cubans were willing to accept. In 1999, the government passed a law that doubled some prison sentences. Judges also allowed fewer prisoners out on parole. Police were stationed on every corner in the tourist areas. The crackdown resulted in a 20 percent drop in crime, Supreme Court Justice Jorge Bodes Torres told me in an interview at the time.

He attributes the success to “law and order” measures and community organizing. “The majority of people are involved in fighting crime,” he says. “That’s the most important factor.”

Cuban political dissidents sharply disagree. They claim that police routinely beat and imprison government opponents. However, as I’ve documented, many of these dissidents are funded by Washington and regularly spread fake news, so their claims of systematic brutality lack credibility.

Some Cubans do have legitimate complaints. I’ve interviewed dozens of young Afro-Cuban men who have been stopped and questioned by police because they are Black.

Pablo Michel, a young Afro Cuban, tells me he was detained by police several times in the tourist areas of Havana. On one occasion, he drove two white women tourists to the Havana airport. Police stopped and questioned Michel, suspecting he was running an illegal taxi service. He says white Cubans taking foreigners to the airport “don’t have the same problems.”

Michel and others I interviewed say that police don’t conduct violent searches, and they don’t beat or shoot suspects. Nevertheless, too many police stereotype dark-skinned Cubans as thieves and hustlers, he says.

“This is a real step forward after we have fought for so many years,” Deyni Terri, founder of the Racial Unity Alliance in Havana, told Reuters last November. “It’s a good start.”

Obviously, institutions developed in Cuba can’t simply be transferred wholesale to the United States. But we can learn from the concept of community involvement, says Max Rameau, an organizer with the Washington, D.C.-based grassroots group Pan-African Community Action, who has studied Cuban police practices.

“We need different community entities for different tasks that are responsible for safety and wellbeing of the neighborhood,” he tells me in a phone interview. For instance, U.S. community groups can resolve mental health issues and family disputes without involving police.

But Rameau does not support getting rid of police altogether.

If a white supremacist attacks a Black church, as happened in South Carolina in 2015, he says, “We want to make sure our community safety team can respond. In any society with different classes, you will have police. But we should have control over them.”

The U.S. debate about policing has shifted distinctly leftward. After the 2014 police killing of Michael Brown in Ferguson, Missouri, politicians called for police to wear body cameras. Today, after the murder of George Floyd, the Minneapolis City Council has voted to dismantle the police force, although it’s still hashing out the specifics.

Anti-police-brutality groups have developed a variety of plans to decentralize police departments into community forces, governed by civilian boards.

For the first time in recent history, people of all backgrounds in the United States are seriously discussing how to fundamentally change the police forces. Cuba’s experiences should be part of that discussion.