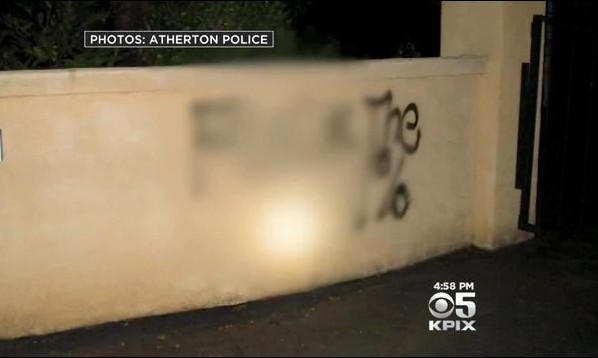 Note: We are not advocating violence by republishing this story, but highlighting the growing anger of the wealth divide that is created by corrupt government that does the bidding of the wealthy.  The failure of the government to take seriously the anger being shown is pushing people in more extreme directions. A local news report concluded that “Atherton Police say it is consulting with other agencies, including the FBI, in an effort to find the vandals. The FBI monitors activist movements such as Occupy Wall Street.”

Has Atherton — named the “most expensive ZIP code in America” by Forbes last year — become the latest battleground in class warfare?

On Feb. 16, vandals spray-painted the message “F… the 1%” on perimeter walls, fences, garage doors, a gate and a car on at least nine properties in the town’s Lindenwood neighborhood, according to Atherton police Lt. Joe Wade.

And on a street in front of one house was scrawled in black paint the words, “Kill People.”

As part of its investigation, the Atherton Police Department contacted other local law enforcement agencies as well as the FBI, Wade said.

“We send out notifications to anybody we think might have information,” Wade said. “They’re (vandals) talking about the 1 percent, that’s happening beyond our local reach. Sometimes the FBI will monitor protest groups and things of that nature.”

The police department also sent out an announcement informing residents about the graffiti and advising them to keep their homes secure.

The vandalism took place between 6 and 9:30 p.m., along several blocks of Greenoaks Drive and the 100 blocks of Hawthorne, Rosewood and Heather drives, Wade said.

He said police have sought private security camera footage from residents, but so far have come up empty. Some residents don’t have surveillance cameras and others didn’t have them focused on the areas where vandals struck or didn’t have them turned on, Wade said.

“We don’t know if it was an organized group or a couple of teenagers,” he said.

During the Occupy Wall Street demonstrations that sprung in 2011, protesters tarred capitalist institutions such as banks and the very rich as “the 1 percent” and referred to themselves as “the 99 percent.”

Although the Occupy protests have since mostly fizzled, venture capitalist Tom Perkins made headlines earlier this month when he suggested the sentiment remains. In a letter to the Wall Street Journal, Perkins said he perceived “a rising tide of hatred of the successful one percent” and compared the vilification of the wealthy to the persecution of Jews by the Nazis.

In 2012, the median income of an Atherton household was $228,393, according to U.S. Census data. The tree-lined Lindenwood neighborhood, off Middlefield Road, is home to old-money families and Silicon Valley leaders, including Hewlett-Packard CEO Meg Whitman.

A neighborhood resident pushing her 3-year-old son in a stroller Tuesday afternoon said she hadn’t heard about the graffiti and now feels a little worried.

“It makes sense that it would happen in this neighborhood,” said the woman, who did not want to be identified.