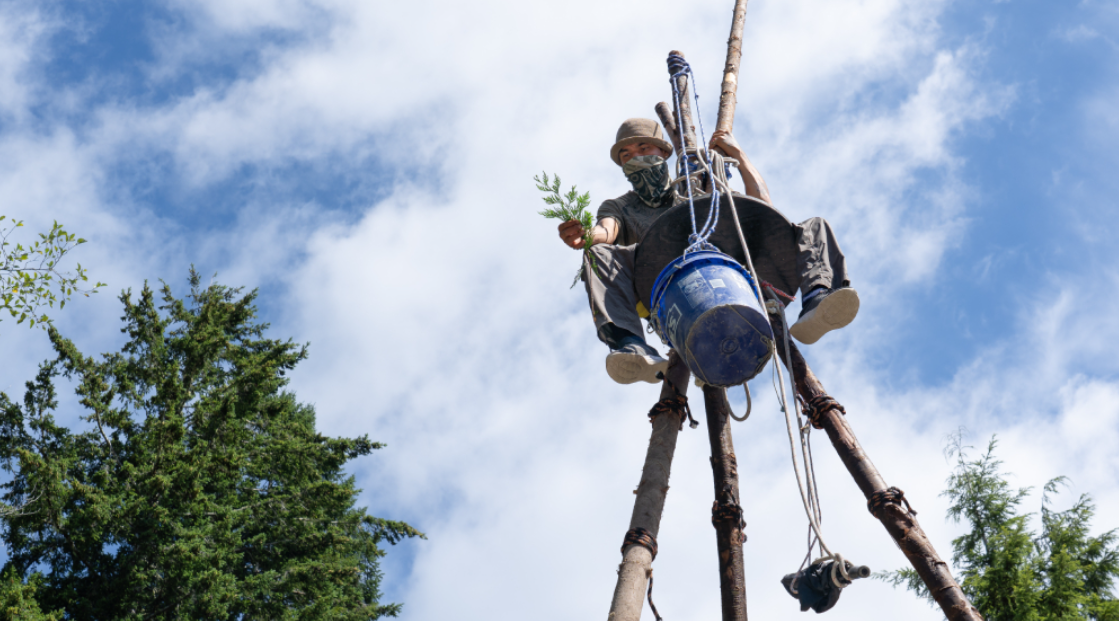 Above photo: A forest defender sits in tripod during police enforcement at Fairy Creek headquarters in Pacheedaht Territories near Port Renfrew. focus.wandering.

As activists in Victoria celebrated the anniversary of the blockade, RCMP officers worked to dismantle it.

In a major advancement of police activity in the old growth blockades around Fairy Creek on Southern Vancouver Island, RCMP raided the gate to the blockaders’ headquarters on Monday. It was the first time police had carried out arrests at the site identified as a communal hub for the movement.

It also signals the likelihood of more confrontation ahead in the biggest direct action fight to protect B.C.’s old growth forests in decades.

“The frontline has been brought to us,” Willow, a forest defender who is stationed at blockade headquarters, told The Tyee.

The escalation occurred as blockaders were preparing to mark their one-year anniversary occupying the forests in Pacheedaht Territories surrounding Port Renfrew. A number of blockaders had left the area to travel to the rally planned that day at the B.C.’s parliament buildings in Victoria.

Some say the RCMP’s timing was strategic, allowing them to capitalize on the decreased numbers on the frontlines.

“They’re taking advantage of this celebration that we have at the legislature to come in today,” said Rainbow Eyes, an Indigenous land defender.

Blockaders also allege that the RCMP used excessive force during the raid. One man was taken to hospital with a broken ankle after an altercation with a police officer.

Actions began at 8 a.m. Monday morning, when an RCMP officer notified blockaders at Fairy Creek headquarters that they would have 24 hours to vacate. According to a witness, the RCMP failed to honour that timeline and began enforcement shortly thereafter.

Throughout the day there were over 20 arrests carried out by 24 tactical officers. Eight officers accessed other other camps in the region by helicopter, activists say.

One of those camps was Heli camp, which was disbanded after Monday’s actions. The camp had been established as a barrier to the roughly 200 hectares of old growth near Granite Creek watershed where logging company, Teal Jones, has a license to cut. A rare species of speckleberry lichen, Pseudoyphellaria rainierensis, was recently discovered in the region.

The RCMP had not responded to The Tyee’s request for comment by publication time.

The Fairy Creek blockades have become a lightning rod for B.C.’s old growth forest protection movement. While the blockade counts the support of Pacheedaht Elder Bill Jones, and hereditary Chief Victor Peter, they have not received support from Pacheedhat elected Chief Jeff Jones or the rest of the band council.

In June, the Pacheedaht, Huu-ay-aht and Ditidaht First Nations called for a deferral in some old growth forests in the region, and asked blockaders to leave the site. The blockaders say that critical old growth, including Granite Creek, was left out of the deferrals.

Monday’s raid of blockade headquarters had been anticipated by some activists. After around 80 days of police enforcement of the injunction filed by Teal Jones, blockader Joshua Wright says he was “not surprised” that the action took place.

With over 520 arrests made since the movement began a year ago, Fairy Creek rivals the largest civil disobedience event in Canada’s history — a distinction still held by the Clayoquot sound protests.

Indigenous land defender Neegonwewedon was at the headquarters gate when he says RCMP officers approached on ATVs. He says one officer drove aggressively at high speeds throughout the communal camp behind the gate. That worried him, because he knew there were children and pets present. “It was a very dangerous situation,” he said.

As the arrests at Fairy Creek headquarters took place, hundreds of people gathered in downtown Victoria to express their solidarity with the blockades.

Speakers at the parliament buildings included Pacheedaht Elder Bill Jones, forest ecologist Suzanne Simard and Kwakiutl Hereditary Chief David Mungo Knox, whose Nation has long called for an end to old growth logging in their territory on the northeastern tip of Vancouver Island.

During the event Knox carried out a traditional Kwakwaka’wakw copper ceremony to hold the government accountable for its inaction on Indigenous Rights and ecosystem protection.

“I’m honoured to be able to come forward and talk about what the cedar really means to us,” said Knox in a statement.

Back at Fairy Creek, land defenders signalled their intention to continue the blockade, despite the raid and the arrests.

“We have to do everything we can to protect our planet right now and protect the old growth,” said Rainbow Eyes, highlighting connections between Monday’s new IPCC report on climate change and old growth forests that regulate temperature and store carbon.

“We have to fight, and this happens to be the fight those of us who are here are able to do 100 per cent and with everything that we have.”

Zoë Yunker is a Vancouver-based journalist writing about energy and environment politics. She works with The Tyee as a Tula Foundation Immersive Journalism fellow.