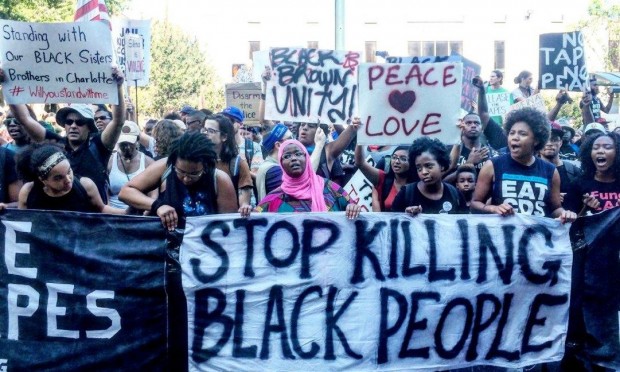 Above Photo: The police shooting of Keith Lamont Scott in Charlotte, North Carolina, sparked several days of protests and calls for fundamental reforms of the police department and criminal justice system. (Photo by Facing South.)

Last week, in a powerful moment during the nonviolent protests in Charlotte, North Carolina, following the Sept. 20 shooting of Keith Lamont Scott by a police officer, protesters marched to the county jail and chanted to the inmates inside, “We see you! We love you!” The inmates responded by flickering their lights from inside the jailhouse walls as the crowd cheered outside.

With this display of solidarity, the protesters affirmed the humanity of those who are incarcerated. It was a profound statement and points to one of the most fundamental struggles for African Americans from Jamestown to Charlotte: to be seen as worthy of full treatment as human beings.

Once considered only three-fifths of a person, Blacks were said to have been granted rights as other U.S. Americans after the Civil War through the passage of the 13th, 14th, and 15th amendments — the Reconstruction amendments. For a short time during Reconstruction, Blacks were able to assert themselves as American citizens: Black men were able to vote and, joining forces with progressive whites, they formed fusion governments that expanded basic democratic rights.

But the backlash from racist whites who had no interest in moving forward would eviscerate the advancements Blacks had made during Reconstruction. In 1877, when Reconstruction ended, the period of racial lynching began.

From 1877 to 1950, about 4,075 Black people are reported to have been killed in racial terror lynchings. Many, including the United Nations, see a strong resemblance between the lynchings of this period and present-day police killings. Blacks continue to face an enormous amount of state-sanctioned violence, a reality that deprives them of their full rights granted under the Reconstruction amendments.

And for many, jails and prisons are the epicenter of the violence that continues to be perpetuated on Black people. Mass incarceration, which Michelle Alexander refers to as the New Jim Crow, disproportionately targets African Americans.

According to the NAACP,  five times as many whites use drugs, but African Americans are incarcerated at 10 times the rate of whites for drug offenses. Current trends show that one in three Black men are expected to spend time in prison during their lifetime.

As it stands, the U.S. Constitution still views those who are incarcerated as less than fully deserving of citizenship rights. The 13th Amendment passed in 1865 outlawed slavery “except as punishment for a crime,” which critics say undermines the full rights of those behind bars.

They also signaled that, while they were separated by jail walls, the prisoners and protesters were connected by the lived experience of being Black in this country.

Just as those who are incarcerated are denied basic rights, African Americans who are not incarcerated are denied the promise of the Reconstruction amendments. Despite the guarantee of citizenship rights in the 14th Amendment, viral videos show daily that Black people are deprived of “life, liberty or property without due process of law.” The 15thAmendment’s guarantee of the right to vote is still under attack by laws that courts have agreed are racially motivated in their efforts to deny access to the ballot.

As the demonstrations in Charlotte continue over 10 days after the death of Keith Lamont Scott, protestors continue to draw connections between the killing of Blacks at the hands of police and the broad denial of constitutional and human rights that plague African Americans every day. Until everyone is seen as worthy of being treated as humans, there will be a need to demonstrate against this oppression.