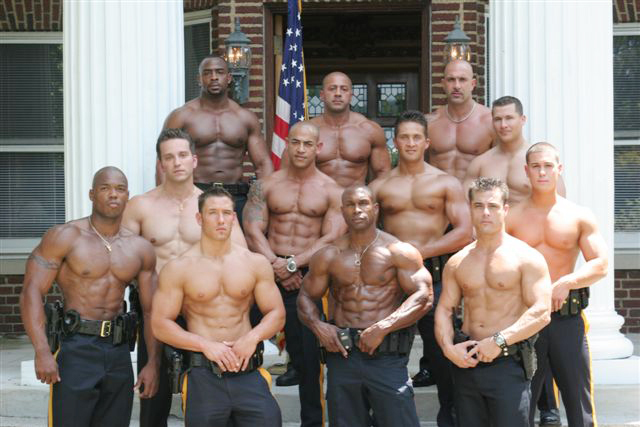 Juicers in Blue: It’s the “other” doping scandal, and we’re breaking it wide open

Officer Jimmy (not his real name) knew his steroid use was paying off when, one day, the Ohio policeman needed to wrestle a suspect to the ground–and the guy crumpled like a piece of wet cardboard. “It took no effort at all,” Jimmy marvels. For Kevin, a military policeman, his steroid epiphany came as he was throwing a rowdy patron out of a Southern California bar: Kevin grabbed the guy by his belt and yanked him right out of his chair. “He landed about 2 feet behind me,” he remembers. Former Suffolk County, New York, officer Tom Foley had a steroid moment of a different sort when, while vacationing in L.A., he was pumping iron at Muscle Beach–with visions of his idol, Arnold, dancing in his head–and spectators started taking his picture.

“It was unbelievable!” Foley exclaims with a bashful smile, holding up a framed photo from that session: a shot of his shirtless back, an explosion of finely cut lats and traps. Foley, 33, is seated on the back porch of his girlfriend’s Long Island home, enjoying the simple pleasure of breathing free air. He’s on his very first week-end furlough from prison, where he’s nearing the end of a 3-year sentence. And while he’s stayed in excellent shape behind bars, he’s no longer Muscle Beach buff. “Yeah, it was amazing,” Foley says, peering nostalgically at the photo. “And that was on 200 milligrams.”

Just call them Juicers in Blue. With their rippling physiques and flair for battling bad guys, they call to mind a flesh-and-blood Justice League–or at least a casting call for a Van Damme movie. And these three men are hardly isolated examples. Cops have long been a hush-hush subset of anabolic steroid users, says Pennsylvania State University sports-science professor Charles Yesalis, Sc.D., author of The Steroids Game. “Most of the police officers I’ve known who have used these drugs consider them a tool of the trade.”

The phenomenon cuts across the country: In recent years, cops in nine states have been accused of steroid-related crimes. Like the four Norman, Oklahoma, police officers whose steroid use was uncovered during a Drug Enforcement Administration investigation last fall, and who were fired. Or the Tampa, Florida, cop who gave a drug dealer a thousand Ecstasy tablets from a police-impounded car in exchange for steroids and was sentenced to 2 years in 2003. Or the Pennsylvania officer who in 2002 pleaded guilty to steroid possession–and to selling ‘roids to two other cops.

Such incidents are sufficiently widespread that the DEA has published a pamphlet called Steroid Abuse by Law Enforcement Personnel, whose cover depicts two uniformed officers surrounded by floating syringes. Still, because juicing cops are a secretive subculture within a secretive subculture, experts have a hard time quantifying the problem. “Resoundingly, yes, I’ve heard many, many accounts of police officers taking steroids,” says Harvard steroid specialist Harrison Pope, M.D., author of The Adonis Complex. “But it’s impossible to put a number on it. Even if I got a federal grant to study this, I wouldn’t be able to get that number, because of the veil of secrecy.” Officer Jimmy, however, is less constrained. “Steroid use is very pervasive in law enforcement,” insists the 26-year-old cop. “I’d say, of the cops I know, 20 percent to 25 percent of them are using.”

Whatever the true tally, it raises the question of what this means for the average, mostly law-abiding civilian. The next time you’re pulled over, will you be hassled by an officer raring for a fight?

If a cop loses control in a fit of ‘roid rage, will your township get slammed with a brutality lawsuit? And, experts speculate, do steroids render cops less effective at their jobs, making you less safe?

“It hasn’t been studied enough, and we need to know more,” says Larry Gaines, Ph.D., chairman of the criminal-justice department at California State University at San Bernardino and the author of one of the very few research papers about cops on steroids. “We don’t have a sense of the scope of the problem. And it is a potential problem, because of the potential for violence.”

Officer Jimmy sees the matter differently. Although he professes to feel conflicted about juicing–it is, after all, a felony to take anabolic steroids without a prescription–he thinks ‘roids made him a better cop. “What law enforcement needs is a little testosterone,” he says. “Every cop should do a cycle a year.”