MSNBC’s Chris Hayes broke down some the discrepancies between the police’s side of the story and what actually happened, and what can be seen in the video surveillance footage released by police a couple days after the shooting.

Police said, according to the Plain Dealer, that Rice was sitting under a pavilion in the park with a few people, suggesting that the boy could have been a threat to others. But the video footage shows Rice was sitting alone as police pulled up.

Police also claimed, according to the Associated Press, that the officer who opened fire on Rice asked the boy to put his hands up three times, suggesting that Rice was given ample warning before he was shot. The video footage doesn’t disprove this, but it suggests the officer who shot Rice, Timothy Loehmann, would have given the commands fairly quickly — Loehmann shot Rice within two seconds of his squad car pulling up to the park pavilion.

“Taken together, [the police account] sounds like it could have been a really threatening situation,” Hayes said. “But this time, unlike in Ferguson, there is a video, and it tells a pretty different story.”

What does race have to do with the Ferguson protests?

The shooting of Michael Brown, like so many similar incidents between police and unarmed black men, renewed conversations about racism in the American justice system and, more specifically to Ferguson, deep-rooted racial disparities in local government and law enforcement.

To the majority-black community in Ferguson, Brown’s death was seen as something that could happen to them or their own sons. Darnell Hunt, an expert on race relations and civil unrest, compared the situation to the shooting of Trayvon Martin in 2012: “Not only was this something that affected people across the country, but other people realized that the fate of Trayvon was possibly the fate of their own sons.”

The statistics bear out the racial disparities in law enforcement. Black teens are 21 times more likely to be killed by cops than white teens, according to the available, limited FBI data. 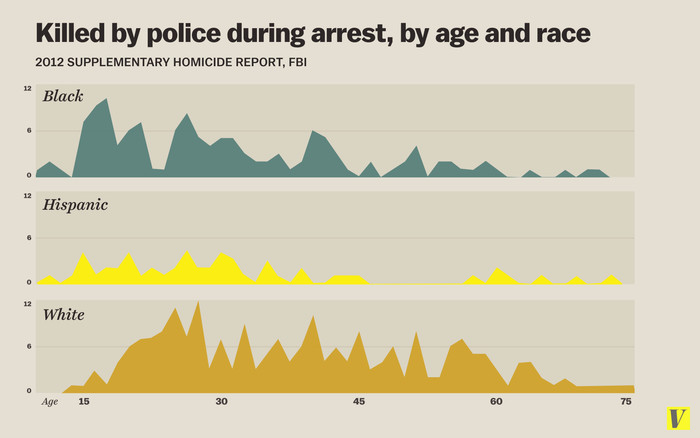 These racial disparities remain even in situations in which a shooting victim wasn’t attacking anyone else. Some of these victims were instead killed while fleeing, committing a felony, or resisting arrest, according to reports collected by the FBI. 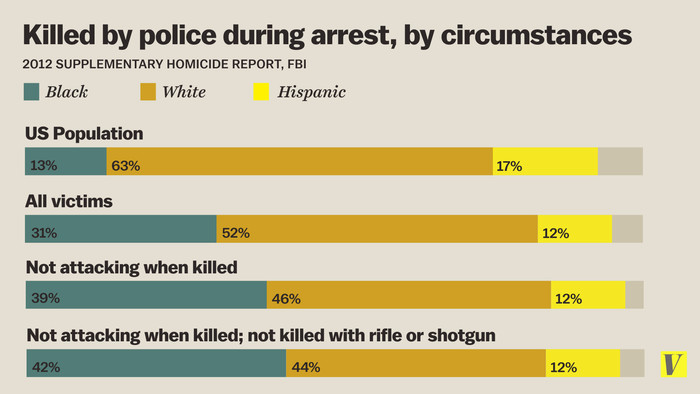 In 2014, there have been several high-profile cases in which black boys and men were killed by police even when they posed no clear threat to anyone else. In Ohio, 22-year-old John Crawford and 12-year-old Tamir Rice were both killed because police mistook toy guns they were carrying for actual weapons. In New York City, a police officer put 43-year-old Eric Garner in a chokehold and killed him because the officer thought Garner was resisting arrest after allegedly selling a pack of untaxed cigarettes.

Police officers in these cases appeared to overestimate the threats posed by their victims, which may be a result of subconscious racial biases.

Darren Wilson, the Ferguson Police officer who shot and killed Brown, claimed to view Brown as a major threat to his life. In testimony to the grand jury, Wilson invoked — perhaps inadvertently —racial stereotypes by characterizing Brown as an unstoppable, violent brute who could kill him in one punch, even though Wilson’s injuries weren’t severe.

The perceived overreactions by police against predominantly black men have driven many in minority communities to distrust and fear law enforcement — out of concern that they or their sons could be the next victims.