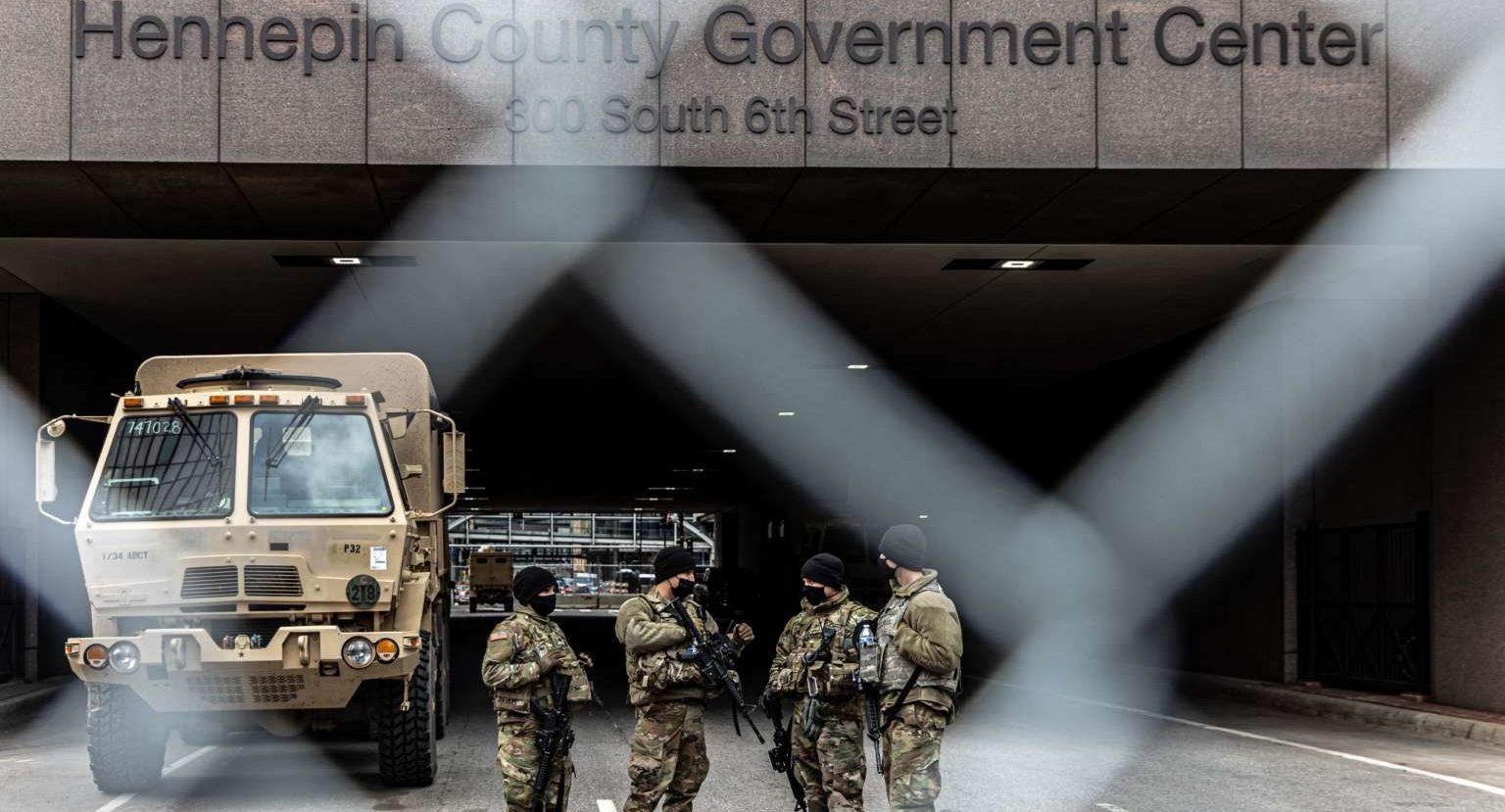 We Must Abolish Both.

Policing and militarism are a two-headed monster that protects and upholds the foundation upon which racial capitalism was built — exploitation of the lives of poor Black and Brown people.

Although much attention has been placed on recent expansions of police militarization, these threads have long been intertwined. For Black Americans, police have always acted as an occupying force within our communities. But during the 1960s, a decade of unprecedented Black radical resistance, the lines between police and military and national defense became even more blurred.

On December 8, 1969, the SWAT unit of the Los Angeles Police Department raided the Black Panther Party’s headquarters in Los Angeles, California. Four days prior, the Chicago Police Department had violently raided the home of and assassinated Fred Hampton, the chairman and leader of the Illinois chapter of the Black Panther Party, based out of my hometown of Chicago. It is in the legacy and practice of militarism that SWAT teams were created — as a means to decentralize and suppress Black resistance.

As a Black femme abolitionist and organizer from the west side of Chicago, I fight in the spirit of Fred “Baba” Hampton, in a movement that is built upon the community-based power around which the Panthers mobilized to combat militarism, colonialism and occupation.

The attack on the Black Panther headquarters in 1969 was one of the first publicly known uses of newly emerging SWAT teams, but they quickly spread. Throughout the past two decades, SWAT units have become more heavily armed and funded and used all too regularly as a tactic of instant response in predominantly Black cities, particularly in response to uprisings. The 1033 Program, created as a part of the 1977 National Defense Authorization Act, allows the Department of Defense to supply local authorities with its military-grade equipment. War weaponry, such as assault rifles, riot gear, grenade launchers and military tanks, is awarded to police departments and used to perpetuate harm against Black and Indigenous people putting their lives on the line to oppose colonization, white supremacy and policing.

The facts are simple: When masses of Black people mobilize, gangs of police move in, and terrorize.

Since the start of the 1033 Program, around 10,000 law enforcement agencies have received around $7.4 billion worth of equipment.

This equipment funds the type of raids that killed Breonna Taylor, it funds teargas being used against Black people in Kenosha and Minneapolis, it funds the batons the Chicago Police Department uses to beat youth in the streets, it funds the water cannons used at Backwater Bridge at Standing Rock. It funds the murder of millions at the hands of policing, war, militarism, colonialism and imperialism. It is a never-ending cycle of violence.

Given all of this, calls to defund police and end wars are bigger than just targeted demands; they are calls to invest in life, abundance and an abolitionist world in which we don’t depend on the military-industrial complex, the prison-industrial complex or policing to sustain our communities.

This struggle is very personal to me. I am an abolitionist from a city that spends $4.8 million a day and about $2 billion a year on policing — and a city in which taxpayers spend about $38 million yearly to arm, aid in and fund apartheid, genocide and state-sanctioned violence against Palestinians.

Militarism is a strategy of using violence to keep people in positions of power in control and to maintain the racial, economic and other social hierarchies that uphold this power.

$4.8 million a day is the allowance police are given daily to uphold militarism in Chicago.

Divesting from education, mental health services, violence prevention that addresses the root causes, housing, and all other necessities of life keeps the racial, economic and social hierarchies in place that justify the supposed need for police.

This is why in this same city the yearly budget for mental health services is around $9.4 million — equal to less than two days of the police budget.

This is why the budget for substance abuse treatment is only 2.6 million — a half-day worth of police budget on any given day. And only $1.5 million is spent yearly in violence prevention — a proactive way to combat violence without the reactionary nature of police.

This is why in 2013, my elementary school and nearly 50 others — all of which were located on the predominantly Black South and West Sides of the city of Chicago — were closed down in one of the largest public school closures of United States history. The city claimed the closures were due to lack of funding, but four years later, the city proposed spending $95 million to build a police training academy in my neighborhood — where they previously closed schools that they supposedly could not afford to keep open.

It is why, as a 12-year-old in 2013, I went to community hearings begging then-mayor Rahm Emanuel to keep my elementary school open. It is why five years later, I joined #NoCopAcademy, a youth-led campaign against the city-proposed policy academy — and for a change in notion that community safety is directly tied to policing. And it is why, today, I am organizing around demands to defund police and to get the cops — who are being prioritized for funding above education — out of Chicago Public Schools.

It is why, as I joined other #NoCopAcademy organizers on the day of the vote over whether to build the police academy, I was beaten in the stairwells of city hall, while Mayor Lori Lightfoot awarded the Chicago Police Department with a new $95 million police school. The violence perpetrated against my being was accompanied by the violence of more resources being poured into state-sanctioned violence.

It is why my voice was ignored in 2013, and again in 2019 when the cop academy was approved. Now, as I scream Rekia Boyd’s name in the street, chant in her legacy and demand divestment from the institution which was responsible for her death, I am again ignored.

The 2022 fiscal budget under President Joe Biden requests $753 billion in national security funding. This is a 1.6 percent increase that includes $715 billion for the Department of Defense. In 2016, the military utilized about $610 billion. Just as national defense budgets continue to increase drastically year by year, local police department budgets continue to rise as wars are waged in poor Black communities via hyper-policing, surveillance and police torture.

Many of my closest comrades from the hood experience trauma from witnessing and experiencing police violence and torture. For nonwhite people — for people who live in hoods flooded by police and abandoned in every other way, and for those of us who watched our sisters and brothers be tortured and targeted by police on a daily basis — conversations about “defund,” “divest” and “abolish” are not new. They are demands, necessities, discussions we’ve been having in our communities for years, and even decades. And for Black Chicagoans, this is about our lives. This violence happens daily. We don’t need another video of Black trauma. We didn’t need to see George Floyd, or Rekia Boyd, or Adam Toledo, or Laquan McDonald or Breonna Taylor be murdered to know policing is violence. We didn’t need to see genocide, war and crisis unfold in Palestine, Yemen or Nigeria to know militarism is violence.

Police and the military operate under the same practices of militarism. Police move into external communities and occupy. Military forces move into external communities and occupy. The idea that Black and Brown communities need “law and order” and that these institutions implement it alongside safety is flawed. Safety for Black, Brown and Indigenous people doesn’t look like more police. It looks like access and abundance, because when you think about the safest place in the world and the places where you feel most safe, it is very likely that they are places with the most resources and the least police.

As campaigns to defund and divest from death and to fight for liberation continue, the struggle for an abolitionist world lives on through every chant at an action; every ancestor that shows us the way; every community relationship we build; and all the steps we take to become a global community connected in love, liberation and abundance.