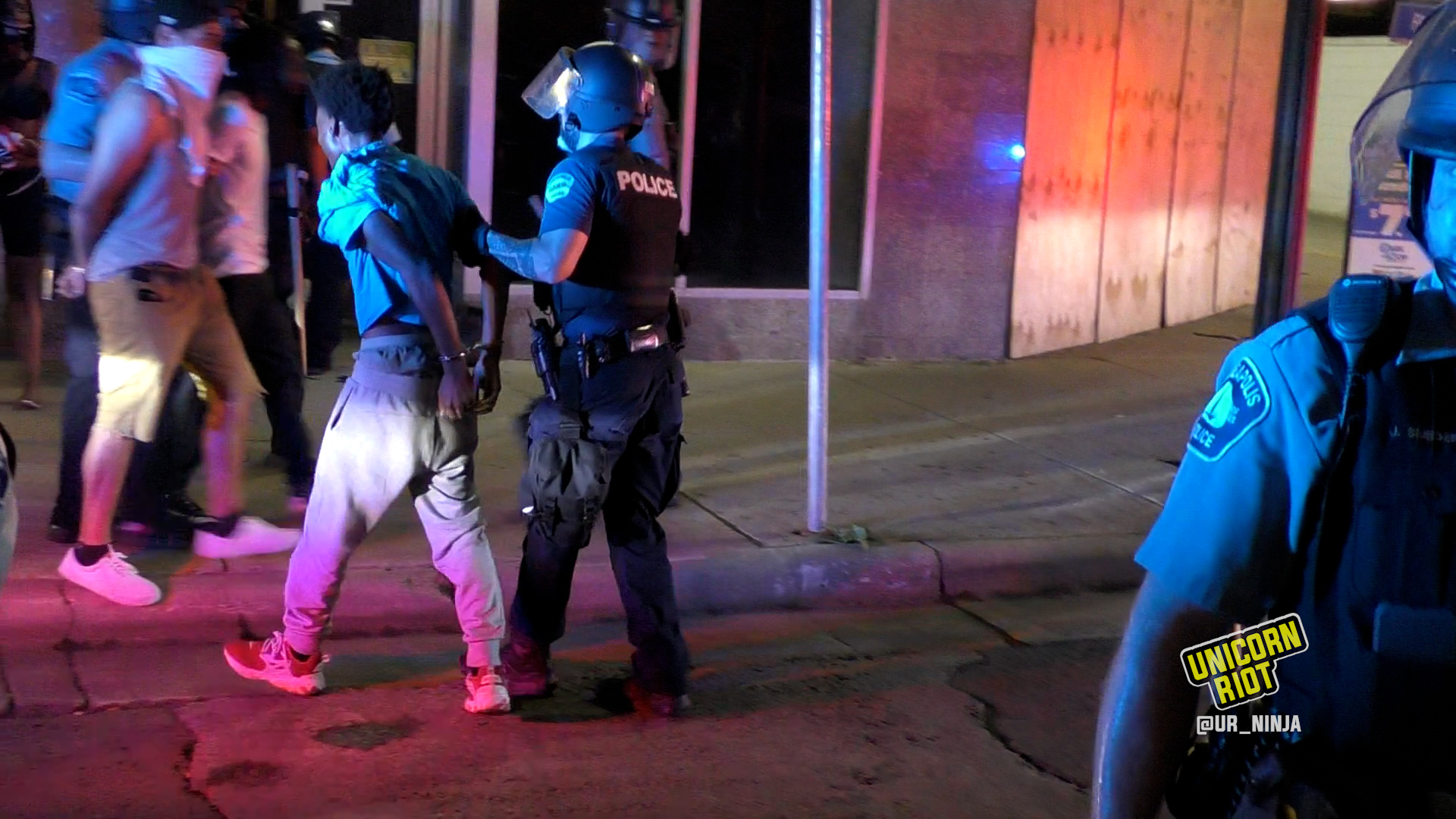 Policing And Punishment In Minneapolis’ ‘SafeZone’

The criminal “justice” apparatus faces increasing criticism for emphasizing punishment, violent abuse and incarceration of criminals rather than rehabilitation. However, few observers recognize the active role community “justice” programs and businesses play in this displacement. The public/private SafeZone initiative launched in downtown Minneapolis in 2004 serves as an instructive example of how programs lauded as reforms can still impose punitive “law and order” tactics onto targeted populations.

“A month ago I was driving down Nicollet going to pick up my girl, somebody shot at me, twice!” Demetri (whose real name is being protected) said in an electrified voice.

Being young, Black, and without a permanent home to settle down from day to day, Demetri was often a target for harassment. However, when he and I met in 2011, the primary perpetrators of his harassment were the police.

This year, Minneapolis has reported record levels of crime and increasing calls for the cops to “do something about it!” Coincidentally, this comes at a time where there is also an increase in police violence, with calls from the grassroots to defund the police reaching a fever pitch.

Demetri and I met up on the Southside on December 28, 2020. The mainstream press has neglected authentic stories like Demetri’s, who is 29 now. We met when I worked downtown as a case manager at YouthLink, a nonprofit that provides drop-in and housing services for youth experiencing homelessness.

I asked Demetri about past harassment he experienced. He recalled a time when he was stopped by two Metro Transit police officers. One of the transit cops had a ticket already written up in his pocket and gave it to Demetri when he saw him, anticipating the encounter. “It’s not like I was innocent. They knew I was selling weed. But I was homeless. I was just trying to eat.” He recalled another time, “The same two officers pulled me off of the bus, for no reason at all. I was minding my own business, on my way to my homie’s crib. This cop gave me a ticket and made me walk.”

Such aggressive policing was not simply the acts of a couple “bad apples”, it was sanctioned. “Community policing” programs, despite being wrapped in the language of reform, can often perpetuate these oppressive dynamics.

In Maya Schwenar and Victoria Law’s critically acclaimed 2020 book Prison by Any Other Name: The Harmful Consequences of Popular Reforms, the chapter Communities as Open-Air Prisons breaks this down for the reader:

“There’s a reason for the mainstream bipartisan consensus around community policing: it maintains and expands the status quo. As advocates call for fewer police and less policing and criminalization, community policing becomes a way to reshape the narrative… But community policing doesn’t make policing more effective, less hostile, or more accountable to the communities they serve in. Instead, it allows police to further entrench their presence in neighborhoods, justify increases in their numbers, and even mobilize community members to participate in policing by surveilling their neighbors.”

– Maya Schwenar and Victoria Law, Prison by Any Other Name: The Harmful Consequences of Popular Reforms

In 1976, the Minneapolis Police’s 3rd precinct, which was ransacked and burnt by demonstrators last May following the killing of George Floyd, created a program to address community concerns of crime and police brutality.

Their goal was to outsource the job: to enlist neighbors in policing each other. According to a report released in 1983 by the U.S. Justice Department:

The 1983 report’s section on Minneapolis concluded:

…”Southside residents are now aware of police procedures and trained to look for potential crime problems; the police are now aware of and responsive to community concerns. Together they have managed to rid the south side of Minneapolis of its dubious distinction as the highest crime area in the city.”

Well before 2020, it was clear that this approach had failed.

Some would call this “community policing.” A nicer version of policing with “friendly beat cops who know everyone’s name,” according to Schwenar and Law.

In 2013, YouthLink became an official partner with the city, county and downtown business community, in a new program they called the Downtown 100 Initiative (DT 100) where Anne Kent worked as its first case manager. This program was created to target (and ostensibly help) those who have had the most police contacts in downtown.

“I thought the purpose of this program was to help connect young people to housing and opportunity, so I would frequently update the DT 100 team [probation, prosecutors and police] on goals being met by youth,” former YouthLink case manager Anne Kent said in an email.

“At a meeting with the entire team I talked about how a young man was going to be housed in a few days. The next day the young person I talked about was arrested by the officer that was at the Downtown 100 team meeting. He was in jail on a probable cause [drug] hold and missed his housing appointment. He never was able to move in, his criminal record continued to create barriers to employment and housing, he continued to engage in crimes of survival until he eventually was charged to several years in prison.”

Kent knew then that the program’s focus was not on addressing the needs of vulnerable youth, but removing them from downtown.

“It was explained to me that we would partner with a prosecutor and probation officer that would work consistently with our youth. I naively thought…wow, this could be so powerful helping these entities understand the barriers and circumstances homelessness creates and to hopefully help humanize young people. I definitely thought this was going to be the reform the criminal justice system needed…”

In 2007, old reports made clear that the majority of downtown arrests and citations were for low level drugs and alcohol related behavior, with marijuana offenses being a bulk of them. But as the movement to decriminalize cannabis grew across the country, police began to utilize other charges. “Loitering charges and trespassing were common offenses” for targeting youth in the DT 100 program, who were almost entirely Black and experiencing homelessness, said Kent.

This suggested that if someone could be arrested for just standing in public, then marijuana was never the issue, and was a mere pretext to remove marginalized youth from downtown.

In 2015, just months before the slaying of Jamar Clark by MPD, the Minneapolis City Council repealed spitting and lurking ordinances that were primarily weaponized against Black men. However, loitering remains on the books as a powerful tool for police to deploy at their discretion.

Dominick Bouza, former Operations Director and Night Supervisor at the Salvation Army’s Harbor Light Shelter, said geographic restrictions (georestrictions), which essentially trespassed youth from the downtown SafeZone, work great. Bouza, now the owner of a 5-Plex luxury apartment in uptown, worked closely with the MPD first precinct’s Court Watch, a program that partners with neighbors and business owners who keep watchful eyes on the SafeZone and give “community impact statements” in court, which increase conviction rates. Bouza said he is a fan of the program but added, “over 75% of them are African American. That’ll be the only thing I’d worry about,” he said, referring to people targeted by the program.

Bouza believes diversion is the goal with SafeZone, and that programs like Court Watch have positive effects. But Kent and Mickella Rolfes disagree, saying the emphasis was always on getting the youth out of downtown or trying to lock them up.

Bryant Neighborhood organizer Mickella Rolfes, who worked at YouthLink for six years (including three with the DT 100 program), said the geographic restriction policy was a primary tool for police and prosecutors.

“A grand jury ruled the use of georestrictions unconstitutional around 2015,” Rolfes recalled in an interview with the People Power Podcast. “Of course, they found ways to go around that when [Probation Officer] Morgan Miller started requiring the youth to stay out of [the SafeZone] as a term of probation, or they would be violated and locked up” she said.

(Records of grand jury proceedings are not accessible to the public.)

Rolfes and Kent also remember other charges, such as littering, pedestrian interference (jay-walking), and contempt of court for violating terms of probation, being frequently used to target these youth. As activist calls to defund the police increase, understanding the weaponization of such ordinances that criminalize Black youth today, similar to Black codes during Jim Crow, can help contextualize the current movement.

While writing this report regarding the corrupt relationship between the Minneapolis police and the city’s Black youth, MPD shot and killed 23-year-old Somali youth, Dolal Idd, on December 30. The officers were identified as Sgt. Darcy Klund, Officer Paul Huynh, and Officer Jason Schmitt.

The Star Tribune’s coverage of this killing has placed credence in the police’s perspective, typical of the paper’s track record of collaborating with authorities. The police bodycam video of the killing is inconclusive and the whole case requires Mayor Frey and Chief Arradondo answering to the legitimacy of such dangerous operations that led to Idd’s death, and the question: Why were the police performing a sting operation / “gun recovery” at such a busy Minneapolis gas station during rush hour, rather than in the suburbs where the victim lives?

Programs are masked in “reform” language to make the public think they are doing a community service when they are actually serving dominant interests. In Minneapolis, the leading players are the downtown corporate business community led by Target Corporation, the city attorney’s office (led by Jim Rowader, former Target executive), Hennepin County prosecutors, the mayor, the city council and the Downtown Council. The Minneapolis police are weaponized like a private paramilitary force, as seen in developing nations such as Nigeria and Bolivia, to do dirty deeds for downtown’s elite.

The way corporations and government formed a union in downtown Minneapolis to protect the interests of the wealthy, the same is required from the grassroots to successfully upend this power structure.

In the United States, where the justice system is not rooted in rehabilitation but rather punishing people like Demetri for being poor and Black, such an obviously discriminatory “public safety” model begs the question: safety for whom?

Marjaan Sirdar is a freelance writer in South Minneapolis’ Bryant neighborhood, where George Floyd was killed by the MPD. He is the host of People Power Podcast.