Female protesters were holding up photos of Heather Heyer, who was killed at the white supremacists rally in Charlottesville

Polish police broke up a feminist rally and forcefully removed activists to clear the way for a march for far-right extremists.

A live stream of the protest shows members of the All-Polish Women’s Strike group and activists from Obywatele RP, which aims to defend democratic principles in Poland, taking part in a sit-in in central Warsaw, to block the far-right rally’s route.

Many of the women were holding up photos of Heather Heyer, the American woman killed when a car ploughed into a crowd of counter-protesters during a white supremacist rally in Charlottesville, Virginia, over the weekend.

Footage shows the women activists dressed in black and sitting on the floor, with banners reading: “If you’re not outraged you’re not paying attention. Heather Heyer, victim of fascism August 2017”.

Another read: “Get fascists off the streets”.

However, police officers were filmed forcibly removing the protesters off the street before taking them to a side street and recording their names. As they did so, new protesters arrived to take their place in the sit-in. 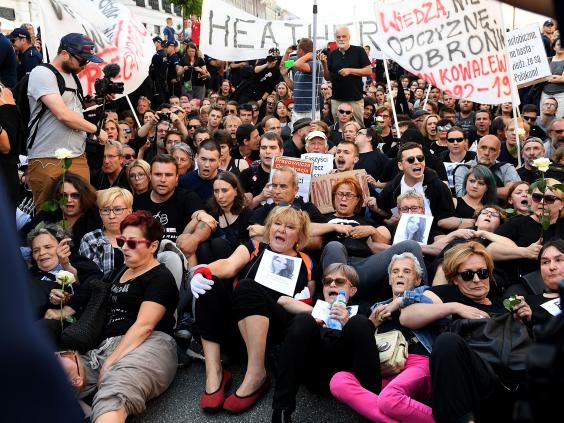 Officers were also seen heavily guarded the far-right extremists on their march which according to local media reports was organised by the nationalist All-Polish Youth group.

According to Polish news website Fakt, members of the National Radical Camp, known in Poland as the ONR, were also part of the far-right march.

An anti-communist and nationalist political group, the National Radical Camp has been described as being influenced by Italian fascism and rejecting parliamentary democracy.

Fakt also reported that officers told the anti-fascists protesters to clear the way or the force would have to coerce them into doing so.

The All-Polish Youth reportedly met in front to the Polish Army Museum and were supposed to make their way across the city to the tomb of the unknown solider.

“We want to pay homage to the outstanding generation of Poles who have regained independence for Poland and who defended it in front of the Bolshevik’s barbaric invasion,” the organisers said.

Critics of the ruling Law and Justice party believe the government is emboldening them by failing to denounce them in strong terms.

On social media, some users vehemently denounced the police’s action with many making references to the march reassembling a Hitler youth event.

Earlier in the day, about 1,500 Polish soldiers paraded in Warsaw, while fighter planes and other aircraft flew in formation above.

President Andrzej Duda bestowed a high honour on Lt Gen Ben Hodges, commander of the US Army in Europe in recognition of his commitment to Polish-US military cooperation.

A small unit of US troops joined Poland’s marching soldiers which included some of the thousands deployed in the country as part of efforts to reassure European countries concerned about possible Russian aggression.

The 15 August is a national holiday in Poland which celebrates the country’s victory against the Russian Bolsheviks in the 1920 Polish-Soviet war.