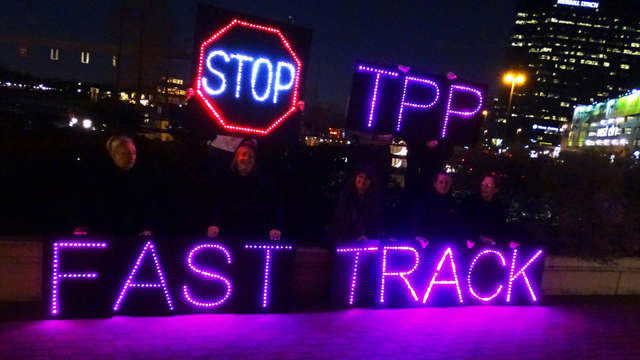 Note: We are pleased to see that some in labor are holding those who voted for fast track trade authority for the TPP and other corporate trade agreements are being held accountbale. The article below focuses on Oregon where some of the key votes for fast track came from, especially from Senator Ron Wyden who was critical to passage in the Senate. We hope he is held accountable and will no longer be in office after 2016.

We are now gearing up for a campaign to stop the TPP this Fall or Winter. Join the effort here.

Oregon labor unionists don’t seem likely to forget the recent Fast Track vote in Congress any time soon. The Fast Track legislation will make it easier over the next six years for Congress to pass more corporate-friendly foreign deals like the pending Trans-Pacific Partnership (TPP). Nationally, Democrats voted by lopsided margins against Fast Track: Fewer than one in six House Democrats and one in three Senate Democrats voted for it. But four out of the six Oregon Democrats voted for it, and one — Senator Ron Wyden — was indispensable to its passage. The votes, held in late June, were 218-208 in the House and 60-38 in the Senate. 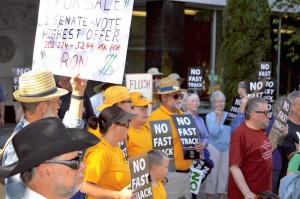 Given the Senate’s 60-vote filibuster rule, any Senator who voted for Fast Track could have halted its passage if they’d voted the other way. Wyden not only voted for it, but brokered a deal with Republicans that brought other fellow Democrats along. That earned him praise and thanks from President Obama, who had pushed Fast Track hard for months. In thespeech Obama made when he signed fast track into law, he named eight members of Congress who made it happen: Wyden and fellow Senate Democrat Patty Murray (Washington), plus some of the most anti-union Republicans in Congress: House Speaker John Boehner and Senate Majority Leader Mitch McConnell, and Senator Orrin Hatch (R-Utah), Congressmen Paul Ryan (R-Wisc.), Ron Kind (R-Wisc.) and Pat Tiberi (R-Ohio).

And in the House, had five “yes” votes gone the other way, Fast Track would have failed. Oregon Democrats Earl Blumenauer, Suzanne Bonamici, and Kurt Schrader were three of those five.

The damage to their relationship to organized labor is beginning to be felt. The Northwest Oregon Labor Council resolved not to invite them to its annual Labor Day picnic this year. The announcement of that decision was greeted with general applause at the July 7 meeting of the state AFL-CIO Executive Board. Likewise, the Oregon AFL-CIO won’t be inviting any Fast Track Democrats to its biennial convention in Seaside this October. That’s never happened before. And there’s more to come.

“Our message is: ‘You damaged the relationship. It’s up to you to fix it,’” Oregon AFL-CIO president Tom Chamberlain explained at the Executive Board meeting.

Senator Wyden is up for re-election in 2016, and so are all the Fast Track Democrats in the House, since they must run every two years.

United Food and Commercial Workers, both nationally and in Oregon, has resolved not to support to the re-election campaigns of members of Congress who voted for Fast Track, in any way. And at least one other national union is ready to back a primary challenger to Wyden, if one should emerge.

Meanwhile, the Oregon Working Families Party, a union-backed minor party, is looking at all options. It would support (and might help recruit) a challenger to Wyden in the Democratic primary. Failing that, the party is likely to challenge Wyden in the general election with a candidate of its own.

If and when the TPP is finalized and goes to Congress for a vote, Fast Track Democrats might have an opportunity to rehabilitate their credibility with labor. Voting against TPP might heal the wound; voting for it will throw salt in it. Obama has touted the supposed unprecedented workers rights protections of the secretly-negotiated deal, but national AFL-CIO president Rich Trumka, whose staff has had access to the classified texts, has said that’s a flat-out falsehood. Trade partners for the deal include Vietnam, an authoritarian state whose impoverished workers lack basic rights, and Malaysia, classified by the U.S. State Department as one of the worst countries in the world for forced labor and human trafficking.

Not all of Oregon’s Democrats voted for Fast Track. The Oregon AFL-CIO says Senator Jeff Merkley and Congressman Peter DeFazio deserve the thanks of union members for their “no” votes and for speaking up in Congress to oppose it. See DeFazio’s House floor speech online here, and Merkley’s Senate floor speech (at the 9:45 mark) here.