A right-wing extremist arrested during a 2018 coup attempt in Nicaragua, who was listed by NGOs as a “political prisoner” and was freed under heavy US pressure, was later found with explosives, guns, and drugs, plotting a terror attack.

Managua, Nicaragua – A Nicaraguan right-wing extremist who was dubbed a “political prisoner” by a US government-funded NGO and subsequently freed under pressure by Washington has once again been arrested. The man was caught with explosives and illegal firearms, and was allegedly plotting terror attacks against his country’s elected, UN-recognized government.

The disturbing incident is just the latest example of a growing series of former “political prisoners” who have unleashed violent chaos in Nicaragua, aimed at destabilizing the leftist Sandinista government.

While these criminals have carried out egregious crimes, up to and including murder, especially targeting women, both the Donald Trump administration and the campaign of Democratic presidential candidate Joe Biden have repeatedly called for more supposed “political prisoners” to be released.

On this Feast Day of Our Lady of Mercy, I stand in solidarity with all defenders of human rights from Cuba, Nicaragua, and Venezuela — and pray for the freedom of all political prisoners.

The United States, European Union, Organization of American States (OAS), and leading so-called “human rights” organizations have aggressively lobbied for the release of Nicaraguans who they claim are political prisoners.

Right-wing Nicaraguan opposition groups funded by the US government have published lists of hundreds of detainees they insist are being unjustly imprisoned. And the US embassy, OAS, Human Rights Watch, and Amnesty International have uncritically used these directories to pressure the Nicaraguan government to free everyone named.

Most of the convicts included in these lists were arrested during a violent coup attempt against Nicaragua’s elected Sandinista government in 2018. Marred by acts of shocking sadism by Nicaragua’s opposition, the bloody putsch had the full backing of Washington and the OAS, which actively support Nicaragua’s opposition and automatically consider any right-wingers detained to be political prisoners.

Faced with this heavy international pressure, Nicaragua’s Sandinista government was forced to the negotiating table with the foreign-backed opposition, and was compelled in 2019 to issue an amnesty for hundreds of people who had been imprisoned the year before.

Since these mass pardons were issued, numerous former detainees who had been individually named in the US-endorsed “political prisoners” lists have returned to their violent ways, and have been arrested again for severe crimes, including murder, rape, and alleged terror plotting. Much of this violence has targeted women.

The Grayzone reported in February on the horrifying case of Ruth Elizabeth Aburto Acevedo, a pregnant 22-year-old Nicaraguan who was repeatedly stabbed by her own boyfriend, who then left her to die in a puddle of her own blood.

Aburto Acevedo’s romantic partner and killer, Jeison Joesma Castro Ortez, had participated in the coup attempt, and had been arrested in July 2018 on charges of terrorism, armed robbery, and organized crime.

But Castro Ortez had the fortune of being named in a US-backed list of “political prisoners,” so the cold-blooded killer was freed in 2019, and unleashed on Nicaraguan society.

The Grayzone’s Ben Norton interviewed relatives of Aburto Acevedo at her family home in Jinotepe, Nicaragua, and they said Castro Ortez was an “animal” and a “psychopath” who had killed people in the tranques – the bloody barricades that epitomized the 2018 coup attempt – and should never have been let out of prison.

.@BenjaminNorton traveled to Jinotepe, Nicaragua to report the shocking story of how the US and OAS lobbied for the release of violent criminals behind a 2018 coup attempt

One man they called a "political prisoner" stabbed his pregnant girlfriend to deathhttps://t.co/6fA6TZOgmO

Aburto Acevedo’s family demanded justice. While the scandal attracted national media attention in Nicaragua, it was curiously ignored by the foreign press.

Meanwhile, the violence carried out by the former “political prisoners” has only escalated.

On the morning of September 14, Nicaragua’s national police force arrested two suspects in the department of Masaya, just south of the capital Managua. They had been carrying bags full of explosives, guns, and drugs.

Nicaraguan security forces published photos showing the men had 10 sets of explosives with detonators, along with two 38 caliber revolvers, and 12 pounds of marijuana. 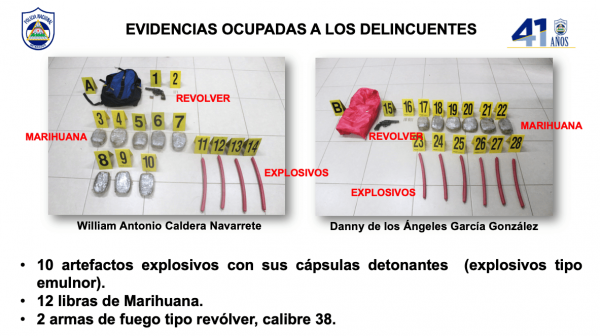 The police said both suspects “admit that the explosives would have been used to target the Masaya mayor’s facilities and monuments to [Sandinista] heroes and martyrs, and to spread terror and anxiety in the barrios of Monimbó, San Carlos, and Divino Niño.”

The security forces charged the men with trafficking of explosives, illegal possession of firearms, and drug trafficking.

In its press release on the arrests, the Nicaraguan police noted that Danny de los Ángeles García Gonzalez had previously been arrested, during the 2018 coup attempt, and had been charged with conspiracy to commit terrorism and possession of restricted firearms.

But García Gonzalez was later freed in February 2019, due to the Nicaraguan amnesty law that had been aggressively demanded by the right-wing opposition and its foreign patrons in the United States, European Union, OAS, and NGOs like Human Rights Watch and Amnesty International.

In fact, the accused terrorist Danny de los Ángeles García Gonzalez was named in a list that was compiled by the Washington-backed Comité Pro Liberación de Presos Políticos (Committee Pro-Liberation of Political Prisoners), a Nicaraguan NGO that is closely allied with major opposition group the Alianza Cívica por la Justicia y la Democracia (Civic Alliance for Justice and Democracy), which was created during the 2018 coup attempt under direct supervision of the US government.

The US State Department relies on the Comité Pro Liberación de Presos Políticos’ data in its own reports on “human rights” in Nicaragua.

A search of the Nicas Presos Políticos database that this opposition group maintains reveals that García Gonzalez was listed. The website describes his previous date of arrest, during the coup attempt in June 10, 2018, as the “date of kidnapping.” 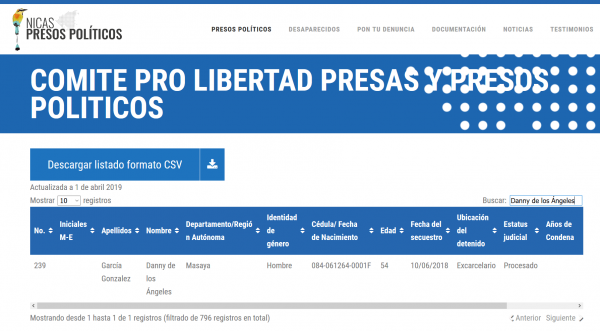 Another US-funded opposition NGO, the Observatorio de Derechos Humanos Nicaragua (Nicaragua Observatory of Human Rights), also included this alleged terror plotter Garía González in its list of “presxs políticxs”. (This neologism is an attempted gender-neutral form of the term “presos politicos” that is not used by Nicaraguans, and is employed almost exclusively by North American liberals cultivated in NGOs and elite academic institutions.) 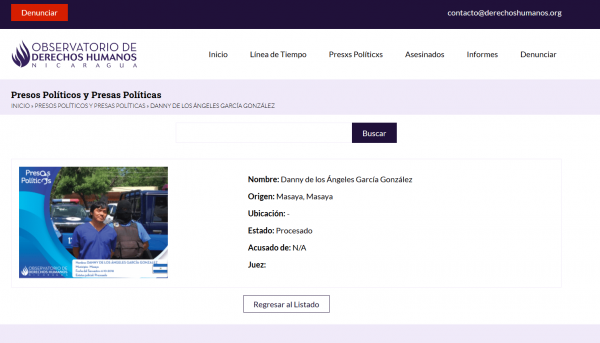 The Observatorio de Derechos Humanos Nicaragua and its directory of “presxs políticxs” is run by a Nicaraguan opposition NGO called the Asociación Cívica por la Democracia (Civic Association for Democracy, or ACD). The ACD is bankrolled by Washington’s soft-power arm the United States Agency for International Development (USAID).

The ACD was a one of the main “civil society” organizations incubated as part of USAID’s Capacity Building for Civil Society Advocacy (CBCSA) program in Nicaragua. The US government institution launched this initiative nearly a decade ago in order to train opposition NGOs to destabilize the elected Sandinista government and eventually remove President Daniel Ortega from power.

Alongside the Pentagon, USAID played a central part in the US coup attempt against Venezuela’s democratically elected government. And as The Grayzone revealed, USAID appears to be gearing up for another coup attempt against the Sandinista government under the auspices of a new program called Responsive Assistance in Nicaragua (RAIN).

US government-backed Nicaraguan NGOs and their sponsors among the European Union and Organization of American States have refused to comment on the crimes committed by the former “political prisoners” whose freedom they lobbied for.

In fact, while these criminals are wreaking havoc, the State Department, the US embassy, and the right-wing coup-plotting leader of the OAS, Luis Almagro, have continued to constantly call for more so-called “political prisoners” in Nicaragua to be released.

We applaud @oas General Secretariat’s April 9 call for ​the government of #Nicaragua to release all political prisoners in light of ​#COVID19 . The #Ortega regime must also cease threats against their families and those who have been released. https://t.co/3NaJNVv2af

The fact that much of the violence carried out by right-wing criminals has been directed at women is a source of particular concern for the Nicaraguan government.

The majority of the leftist ruling party, the Sandinista National Liberation Front (FSLN), consists of women, and it has strongly emphasized the importance of women in the revolutionary movement.

Nicaragua has the fifth-highest rate of gender equality in the world, and the smallest gender gap in all of the Americas, according to a 2018 report by the World Economic Forum.

And although violence against women is not nearly as widespread in Nicaragua as it is in Mexico or neighboring countries in Central America, femicide is still a concern, and the Sandinista government has tried to crack down hard on the problem.

In response to several appalling cases of femicide in Nicaragua in September, including the ghastly murder of two young girls that sparked a nationwide scandal, Vice President Rosario Murillo raised the possibility of life imprisonment for men who kill women and carry out deadly hate crimes. President Ortega subsequently said the courts would discuss the potential reform.

A poll by a mainstream firm, M&R Consultores, found that around 90 percent of Nicaraguans supported the proposal of life imprisonment for deadly hate crimes.

But Nicaragua’s right-wing media publications, many of which are funded by the US government, joined with mainstream Western corporate outlets in portraying the popular proposal to punish femicide as a purported attack on the opposition.

Wilfredo Miranda, a staunchly right-wing opposition activist and frequent contributor to The Guardian and Univision, published an article in Spain’s major newspaper El País with a wildly misleading headline claiming, “Ortega is pushing life imprisonment against the opposition for ‘hate crimes’ in Nicaragua.”

These disinformation campaigns concerning “political prisoners” and Nicaragua’s crackdown on femicide are coordinated attacks in a larger information war against its democratically elected socialist government.

Poll after poll shows Nicaragua’s elite right-wing opposition is extremely unpopular, with support from just around 10 percent of the population. But with loads of cash pouring in from the US government, it has resorted to spreading fake news and destabilizing the country with sporadic acts of violence.

Meanwhile, the victims of the opposition’s criminal shock troops, like 22-year-old Ruth Aburto Acevedo, have been ignored and erased by Washington and its lobbyists in the human rights industry.