Congress Beginning To Speak Out Against End of Net Neutrality, Need to Pressure Them to Speak Out More

Take Action NOW to save the Internet

When FCC Chairman Tom Wheeler’s plan to kill Net Neutrality hit the press last week, it landed with a thud.

Despite the chairman’s attempts to spin the news, it became clear that the proposal would allow Internet service providers like AT&T and Verizon to discriminate online and undermine the open nature of the Internet. 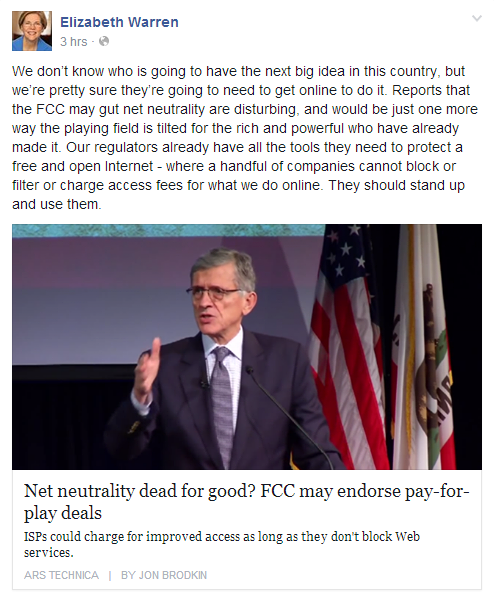 “Pay-to-play deals are an affront to Net Neutrality and have no place in an online marketplace that values competition and openness. This proposal would create an online ‘fast lane’ for the highest bidder — shutting out small businesses and increasing costs for consumers.” — Sen. Al Franken

“Under this terribly misguided proposal, the Internet as we have come to know it would cease to exist and the average American would be the big loser. We must not let private corporations turn bigger and bigger profits by putting a price tag on the free flow of ideas.” — Sen. Bernie Sanders

“Consumers and businesses must be protected from actions by online gatekeepers that threaten free speech, harm competition or diminish the continued openness of the Internet.” — Rep. Anna Eshoo

“Openness is the Internet’s heart and nondiscrimination is its soul, and infringements on either of these features undermines the spirit and intent of Net Neutrality.” — Sen. Ed Markey

“Success should be founded on merit and good ideas, not on who has the deepest pockets. We must not allow broadband providers to relegate competing ideas, products and services to slow, congested speeds.” — Rep. Nancy Pelosi

“I believe the Commission can, and should, draw a brighter line on paid-prioritization agreements. … I also urge the Commission to carefully consider whether section 706 provides the best pathway for these rules or whether Title II … provides a more sound approach.” — Sen. Bill Nelson

Meanwhile, two of Wheeler’s FCC colleagues tweeted in support of the open Internet:

This is a great start, but we need to make sure Clyburn and Rosenworcel understand that supporting the open Internet means they can’t support Chairman Wheeler’s proposal.

And this is where Congress comes in. If we can get more members of Congress to make some noise, we stand a better shot at defeating Wheeler’s plan. So if your senators and representative have kept mum about Wheeler’s disastrous proposal, call their offices and tell them to stand up for Net Neutrality. We need as many voices as possible in the fight to save the Internet.

Take Action NOW to save the Internet