Popular Movements Are The Invisible Hand Of Social Change

The political consensus in the United States is changing rapidly. While the corporate media is focused on the Democratic Party presidential debates and Trump’s tweets in response, the issues that have been advanced by the movement for economic, racial and environmental justice, as well as peace, are becoming central to the political dialogue. There is no reason to rejoice yet, as we still have work to do to win the transformation that people and planet need, but the consensus is moving in the direction of the popular movement.

We want to remind you that this weekend is the 50th anniversary of the Stonewall Rebellion and the ten-year anniversary of the US-led coup in Honduras. The Honduran coup has led to severe austerity, violence and repression. Also, national days of actions for hands off Iran and Venezuela and stopping the raids and deportations are being planned around July 13 and 14. Learn more here. And sign on to be part of the new Embassy Protectors Defense Committee.

The work of activists is being reflected by people seeking office. Polls show that the people are much more progressive than the leadership of either of the corporate parties on issues like taxing the wealthy, national improved Medicare for all, a Green New Deal, free education from pre-school through college, ending US wars and cutting the military budget. Those seeking office are running to catch up to the people.

However, politicians running for office cannot fully represent the views of the people because US democracy is flawed. Money plays an out-sized role in US politics; and therefore, politicians and political parties have to maneuver to both represent the people and satisfy their wealthy donors often sacrificing the former for the latter. This is a constant battle in US politics — people vs. money. And it shows in politicians using rhetoric that sounds like it is in line with the movement but supporting policies that are weak.

This is demonstrated in the debate over single-payer healthcare. There are candidates who pretend to listen to the voters but actually put forward policies that deceive the voters and undermine our goals. Phony proposals like Medicare for some, or allowing a public option as another insurance or reducing the age for Medicare sound good to supporters of Medicare for all but these are not going to solve the healthcare crisis. Some candidates even advocate improving the Affordable Care Act, an approach people realize will not work because the ACA is based on private health insurance that rips people off.

Even candidates who say they support improved Medicare for all need to be pushed. Warren had been relatively silent on the issue and single-payer activists complained to her through various channels. The result was a very strong statement from Warren in the first debate. Our task as a movement is to remain steadfast and demand the real solution — national improved Medicare for all.

On cutting the military budget, only one candidate — Howie Hawkins of the Green Party — has called for specific cuts of 75% from the bloated military budget. Democrats have not been specific, and as a party, they have voted for big increases in military spending, even bigger than Trump has proposed. One Democratic candidate, Beto O’Rourke, has even called for a war tax on wealthy families who do not have any members serving in the military. A tax designed just to pay for military spending is not what the country needs. We have numerous other challenges beyond further funding of the military, which already consumes over 60% of federal discretionary spending. 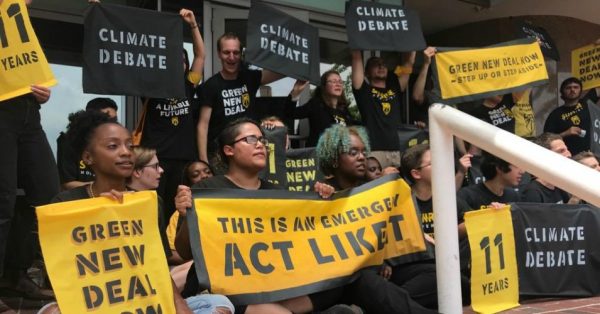 Sunrise Movement in front of the Democratic National Committee in Washington, DC.

The Movement’s Responsibility in the 2020 Election Cycle

The United States’ electoral system limits the choices of voters to candidates who are acceptable to Wall Street and other monied interests. We live in a mirage democracy that manipulates voters primarily by using fear.  In this election cycle, the fear of a second term for Donald Trump is likely to result in an “Anybody  But Trump” electoral year to keep people supporting whomever the Democrats nominate. The powers in the Democratic Party want a candidate whom donors to the Democratic Party can support.

With all the mass media attention focused on the 2020 elections, it is important for activists to remember that our job is to build the movement for economic, racial and environmental justice as well as peace.  We need to continue to build national consensus and elevate the issues we support so that no matter who is elected, movement issues will advance. If we do our job well, our issues will become litmus tests for candidates.

The Sunrise Movement is pressuring the Democratic Party to hold a debate on climate change. In the first two debates, there was no mention of the Green New Deal and there was only six minutes of discussion on climate in the first debate, and seven in the second in what they correctly describe as “the gravest existential threat of our time.” Sunrise, which has been protesting at the headquarters of the Democratic National Committee, including sitting in and spending the night, plans to escalate their protests and insist on a debate around the climate emergency the nation and world are facing.

We must also hold non-profit organizations accountable. These tax-exempt organizations need to be nonpartisan and not show a preference for candidates or political parties. Many nonprofit advocacy groups, who claim to be nonpartisan, are tied to either the Democratic or Republican Parties and improperly use their tax-exempt organization to advocate for the party they support. Activists must push them to be independent of the parties and focus on advancing their issues no matter which party is running candidates.

For example, on June 14, the Poor People’s Campaign held a debate where only candidates seeking the Democratic nomination participated. The debate was live streamed on MSNBC and the video has been published on Real Clear Politics. When the debate was over, young people from North Carolina, Chicago, Philadelphia and New York complained. They did not want to only hear from Democratic candidates. They were angry that the Poor People’s Campaign was showing favoritism for the Democratic Party  As things got heated, the police were called. At that point, longtime poverty and housing activist, Rev. Annie Chambers of Baltimore, stood up from her wheelchair. She said it was “ridiculous” and a “disgrace” saying, “You say you are nonpartisan, but you only have Democratic candidates here.” The reply from the Poor Peoples Campaign was “We invited Donald Trump, too.” Chambers said “There are more than two parties. Where is the Green Party?” Chambers is a Green who was elected to the Resident Advisory Board for public housing in Baltimore. Rev. Chambers looked at the police and Rev. Barber and said, “If you are going to arrest these young people, you need to arrest me too and you will have a fight on your hands. I’m a militant and I’m not nonviolent.” Barber said, “Don’t arrest Rev. Annie” and things began to calm down.

Activists need to remain independent of the two corporate parties and their candidates. All candidates must be pressured to support movement goals throughout the campaign.  When the campaign ends, no matter who is elected, our work does not end. People must continue to demand what is needed to protect the people and planet. Even candidates who make promises to support our policy goals during the election will be pressured by big business and wealthy interests when they are elected. It is essential that the popular movement continues to demand economic, racial and environmental justice as well as peace during the elections and after.

TODAY, leaders of movements for peace and justice launched the Embassy Protectors Defense Committee. Learn more, sign on and support it by clicking here.