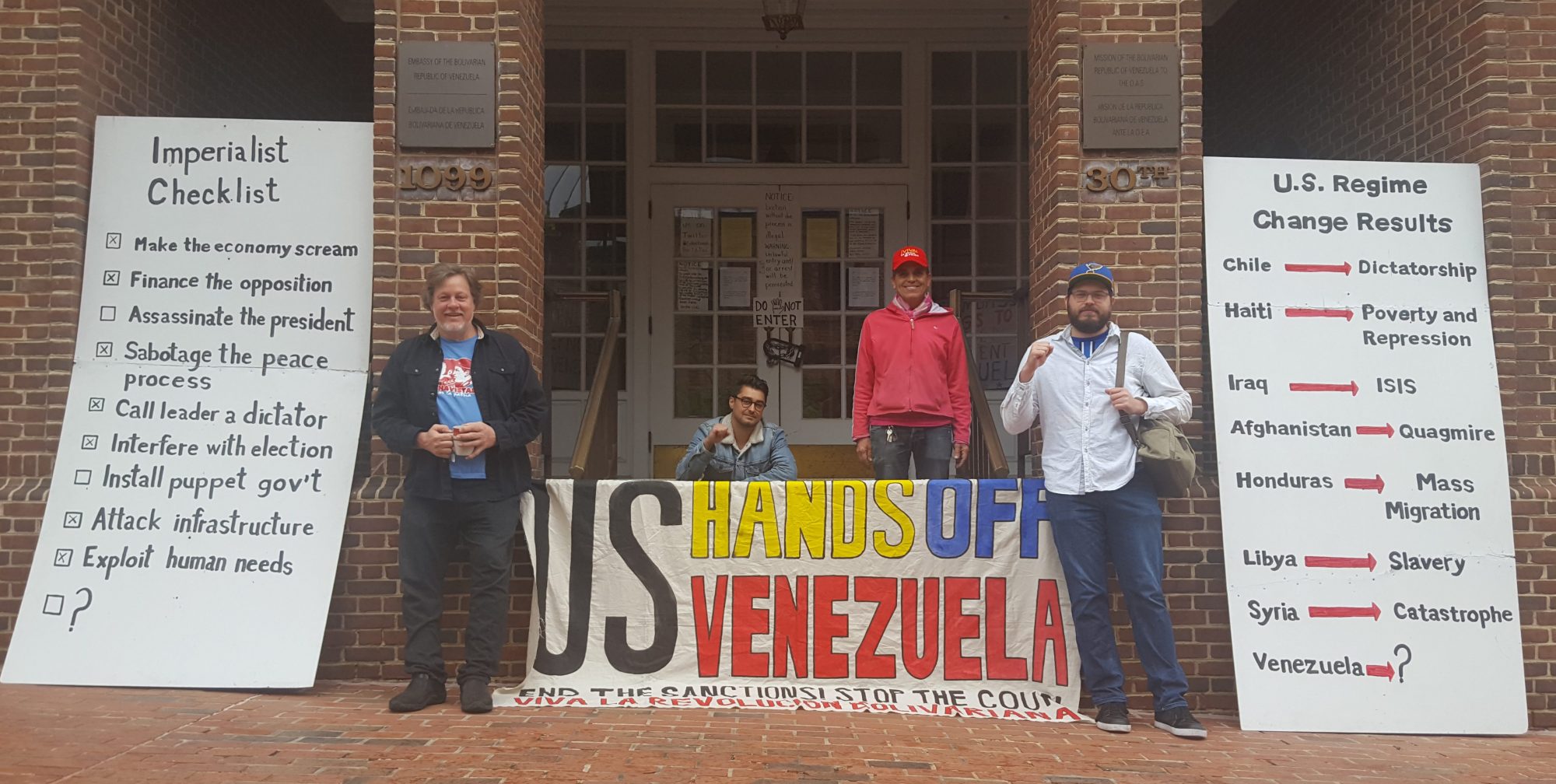 Popular Resistance Expresses Solidarity With Venezuela Against US Blockade

On August 6, 2019, at the same time that National Security Adviser John Bolton is leading a US delegation in Peru to organize opposition to the elected government of Venezuela, the White House released a statement about a new executive order signed by President Trump that creates a blockade on Venezuela.

The executive order blocks the Venezuelan government from having access to any of its property in the United States or any property that enters the United States. It also contains very broad language that allows the Treasury Secretary, in consultation with the State Department, to block any person who is considered to be:

“owned or controlled by, or to have acted or purported to act for or on behalf of, directly or indirectly, any person whose property and interests in property are blocked pursuant to this order.”

And it imposes a travel ban, under the discretion of the Departments of Justice and Homeland Security, to block anyone from entering the United States who supports the elected government of Venezuela.

According to Reuters, John Bolton told the meeting in Lima, Peru that “U.S. authorities can now target and sanction anyone, including foreigners, who supports Maduro’s government.” This action is being taken by the United States to further its attempts at regime change in Venezuela since multiple coup attempts and other interferences have failed to date.

Popular Resistance opposes the illegal actions being taken by the United States, including this latest blockade, and urges the United States to end the unilateral coercive economic measures and threats of military attack, which violate the United Nations Charter. These measures are preventing Venezuela from importing necessary medications, supplies and food, which is hurting the Venezuelan people and has contributed to at least 40,000 deaths in Venezuela since 2017.

Popular Resistance opposes the United States’ support for coup actors led by Juan Guaido and interference in negotiations between the Venezuelan Government and the opposition. The United States is funneling over $40 million meant for humanitarian aid in Central America directly to the US-led opposition, an open act that is unprecedented in the long history of US regime change efforts. The Venezuelan Government responded to the newest blockade with continued dedication to the negotiations.

Popular Resistance is in solidarity with people of Venezuela and supports their right to elect their government free of influence from the United States and its allies.

Popular Resistance supports the Caracas Political Declaration created in July at the meeting of the Nonaligned Movement where representatives from 120 nations that recognize Nicolas Maduro as the elected, legitimate president of Venezuela met to reaffirm their support for the United Nations Charter and international law as “essential tools for the maintenance of international peace and security and in strengthening international cooperation.”

We affirm our commitment to oppose US imperialism and militarism and urge people to join the People’s Mobilization to Stop the US War Machine and Save the Planet, September 20 to 23, 2019 in New York City.

Join the international campaign to support the return to the United Nations founding charter, which considers unilateral coercive measures, interference in politics and military threats/aggression to be illegal. Click here for more information and to sign up.