We need your support to continue the work that we do.

The Popular Resistance team works every day to bring you news and information about the resistance movement. We lift up those who are challenging the system and building a better world for all of us.

We also take on campaigns that are critical and that often seem impossible, and we do everything within our ability to win them. And it does make a difference.

We won net neutrality by building on the work of those who laid the groundwork and bringing in different tools, such as civil resistance, and a commitment to fight for what we needed without compromise. When our allies didn’t believe it was possible to win and when they wanted to accept less, we remained firm and increased the pressure.

Now we’ve seen people-power in action. We must defend this win from challenges in Congress, build on it to further advance Internet access and freedom of speech on the Internet and use this power to take on the next challenges.

Right now, a priority challenge is Fast Track legislation. The president is doing everything he can to make Congress give him legislation that would allow him to sign secret deals like the Trans-Pacific Partnership into law before Congress sees the full agreement. The president and his staff are making personal calls to members of Congress and are making promises in exchange for votes. The Chamber of Commerce is getting ready to launch a $160 million campaign to make people believe that fast track is a good thing.

We must stop fast track. It is a game changer. 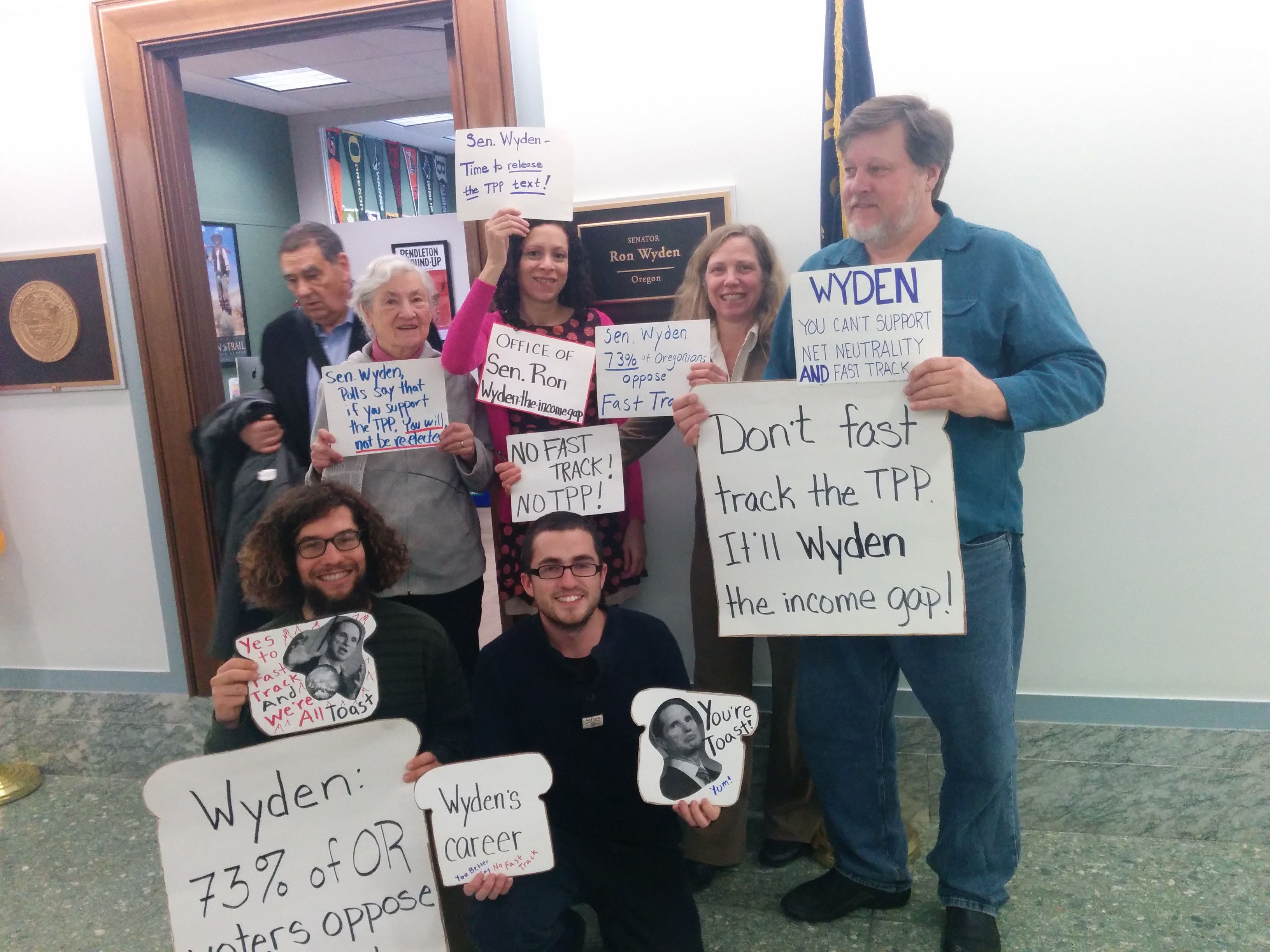 Popular Resistance team during a ‘Drop in and Hang out’ in Sen. Ron Wyden’s office to stop him from supporting fast track legislation.

Fast track would allow presidents to sign secret agreements into law for the next seven years. Agreements like the Trans-Pacific Partnership (TPP), the Trans-Atlantic Trade and Investment Partnership (TTIP ot TAFTA) and Trade In Services Agreement (TISA) are already under negotiation. While most of the contents of these agreements are secret, we have seen leaked portions of them. We know that they will fundamentally alter governance so that we no longer have the right or the ability to protect our communities from exploitation by large corporations that write laws to enhance their profits at our expense.

We can win this. In fact, the President wanted fast track by the end of March but it has already been delayed until April. The more politically toxic we make fast track, the longer the delay. If the bill is introduced, we will need to escalate our tactics quickly.

We are experiencing corporate rule first hand in the We Are Cove Point campaign to stop Dominion from building a fracked gas refinery and export terminal in a neighborhood. Dominion has bought political influence in the local county and has the local SWAT team literally working for them. Many members of our team were recently sentenced to 20 days suspended sentence, a fine and 3 years of probation for trespass in a very repressive court.

But we won’t stop. We can’t stop. The stakes are too high.

The point is that the Popular Resistance team is deeply committed to human rights and protection of the planet. We will do all that we can nonviolently to bring justice and build a stronger movement of movements.

The problem is that by stepping out of the realm of traditional political tools, we are not able to receive funding from traditional foundations. We won’t compromise our work for funding, but we still need funds to do the work we do.

Some of our readers have made donations recently and we greatly appreciate that. We try not to be aggressive about seeking donations, but we currently find ourselves in a situation that makes it necessary to ask. Some of our staff are going without pay and some have reduced their pay in order to keep Popular Resistance going, but this isn’t sustainable.

We know that the economy is hard for everyone, but we are asking you to make a donation if you can. A one-time donation is awesome, but if you can become a sustainer through a monthly donation, that is even better. If you can commit to $10, $25 or $50 a month, that will go a long way to keeping us going.

We appreciate our readers. You are the Popular Resistance community. Many of you are actively fighting in your communities and we hope to serve you by raising up your struggles. If you value Popular Resistance, please support us in any way you can.