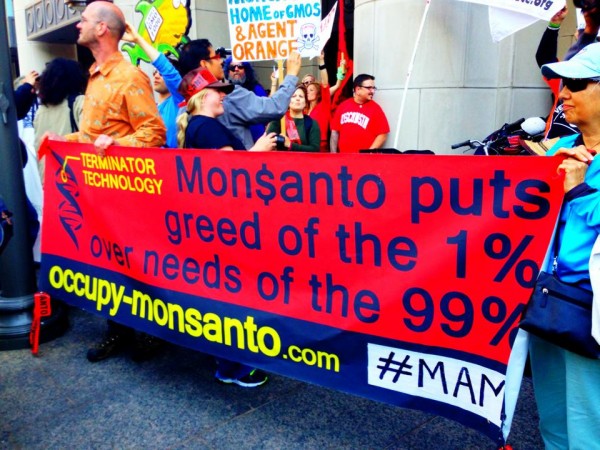 Two years ago, we launched October2011.org with “History is Knocking.” We asked if the time might be right for a larger mass of people to rise up against the corporate control of our government and US imperialist policies. We were not certain what the answer would be, but six months later hundreds of thousands of you did rise up in Occupy Encampments across the nation. Many more were inspired to join the work on a broad variety of injustices in their communities.

Today we know that history is no longer knocking. History has opened the door and is standing in front of you. The broad movement for peace and social, economic and environmental justice is here and you are part of it.

Today we announce a new platform to connect and build the mass popular resistance that is growing in the US. It’s called PopularResistance.org. It is a daily movement news and resource website to keep you informed about actions and events, and to provide you with tools for organizing in your community and creating a new world. We also seek to provide a common vision to end corporate rule and a strategic framework to achieve it. Here is aguide to using the website.

To make this next phase effective, we ask you to share PopularResistance.org with others (see the “forward to a friend” button below). This is the movement’s site, and we encourage you to use it: submit your projects to the calendar, send us your ideas, and share articles and tools. Many have already joined as contributors.

We announce this new effort following the tremendously successful worldwide March Against Monsanto with more than two million people participating in protests in 52 countries and 457 cities.This reveals the potential of the movement and need for PopularResistance.org because the corporate, mass media gave virtually no attention to these protests.

The Monsanto march showed the power of non-hierarchical organizing, allowing leadership to grow wherever it was, and the solidarity across cities and nations of the world. Now two nonviolent activists from the Metta Center ask the question: Could the March against Monsanto be our Salt March? Could this be a turning point in our challenge to corporate power? We think it could be. Opposition to Monsanto is really about bigger issues of corporate power and globalization.

To build on this momentum, our first campaign as PopularResistance.org will be to stop the Trans-Pacific Partnership. We will stop the TPP. It will be a great victory against transnational corporations seeking a global corporate coup. It will be a great victory on which we will continue to build a movement against the rule of money and concentrated corporate power. Here is the strategy:

1.       Educate and unify people by showing that the issues we care about will be made worse by the TPP. The TPP is not really a trade agreement at all. It is a corporate end run around government on everything from Internet freedom to banking regulation; from worker rights to health care; from environmental protection and agriculture to consumer safety. The TPP is an issue that unites us in solidarity across issues and across nations.
2.      Expose the corporate interests who have drafted the agreement. Three years of negotiations have been kept secret from the media, elected officials and the public while business interests like Monsanto, WalMart, Wall Street banks, massive pharmaceutical companies, Exxon-Mobil, BP –  in all there are 600 corporate advisers – are helping to draft the TPP. The result is an agreement that puts profits ahead of the necessities of the people and the protection of the planet.
3.      Stop “Fast Track,” now known as Trade Promotion Authority. The Obama administration knows it cannot pass the TPP if Congress plays its constitutional role by holding hearings, allowing witnesses to testify about the impact of the TPP and allowing amendments.
4.      Stop the TPP with protests at negotiations, corporate headquarters, in Washington, DC and at home in congressional districts. Since the Battle of Seattle in 1999, the World Trade Organization has been stalled. When the people know what is in the TPP, they will stop this too and any member of Congress supporting it will be kicked out of office.

The Trans-Pacific Partnership can be stopped. Already, a movement is growing to stop it and we will work closely with that movement. We need you to help: start by spreading the word.

This is why the TPP is so important. When we look at the resistance efforts of the last week, we recognize that all of these struggles would be made more difficult if the TPP becomes law:

Worker Rights: Today, Seattle became the seventh US city in which low-paid workers walked out of fast food restaurants demanding a living wage of $15 per hour. Thousands of women in Cambodia who work in garment factories held a sit-down strike despite being confronted by police wielding electric stun batons akin to cattle prods. WalMart workers launched their first sustained strike  and will hold a June 7 Ride for Respect to the annual shareholders meeting.United Students Against Sweatshops continues to protest sweat shops, unfair wages and industrial accidents. Under the TPP, laws protecting workers would be challenged with corporate lawsuits for any decrease in profits.

Housing: Foreclosure activists conducted mass protests last week in Washington, DC. The actions they seek and laws like the Homeowners Bill of Rights in Minnesota, which passed because of activist pressure, would be challenged under the TPP. Banks and mortgage lenders could sue governments in trade tribunals for lost profits, in which the judges will often be corporate lawyers on leave from their job.

Education: Students who are protesting the closing and the privatization of schools will find that there is strong opposition in the TPP to so-called “state-owned enterprises” such as public schools which will also weaken public services like health care in favor of for-profit corporate interests.

The Environment: Environmental groups organizing for the fearless summer of protests against extreme excavation of radical energy will find their goals more difficult to achieve despite “terracide” and tar sands waste that is piling up. Existing trade laws have resulted in 450 suits by corporations against 89 governments. Over $700 million has been paid to corporations, about 70 percent of which are from challenges to natural resource and environmental policies. If a country decides to ban fracking or tar sands, the companies will sue for lost profits.

Big Finance: Protesters who want to see the big banks broken up, top officials prosecuted or greater regulation will find the TPP makes these more unlikely. The TPP gives banks greater laxity to move money in and out of countries, stops regulation of banks and allows casino-style high risk investments to continue.

Food: Opposition to Monsanto and genetically engineered foods will be made more difficult. AsTrade Justice for the New York Metro area points out: “Under the TPP, the sovereign right to control biotech foods will be delegated to BigAg – a world market concentrated in the hands of a few multinational players that will entirely circumvent the democratic process and political action.”

Corporatism: Last week, Los Angeles voted 76.6 percent to end corporate personhood, joining 175 other cities in calling for a constitutional amendment to end the rule of money. If the TPP isn’t stopped, we will look back on it as the move to corporate nationhood.

These are just a few examples of current injustices people are working to end that will be made more difficult if there is a global corporate coup. We will send you more on the Stop the TPP campaign in the coming weeks. For now, begin to educate the people you know by sharing this newsletter (see below) and urging them to sign up.

All of the ingredients for a mass popular resistance movement exist. People are suffering under an economy that favors wealth and a dysfunctional government corrupted by campaign money, and people see there is a path that could lead to successful transformation of the government and economy. Now is the time to get involved and help make the potential a reality.

In peace and solidarity,
Kevin, Margaret and PopularResistance.org

This weekend there are two events we want to highlight from our calendar.  On Saturday, June 1 will be a massive rally in support of whistleblower Bradley Manning.  His court martial begins next week.  In New York City, June 1 is Occupy Homecoming, as occupiers re-take Liberty Plaza (aka Zuccotti Park). Next week is the Public Banking conference in San Rafael, CA from June 2 to 5. There are lots more events on our calendar. And there are two new OccuCards: Public Banking and the Corporate Media.