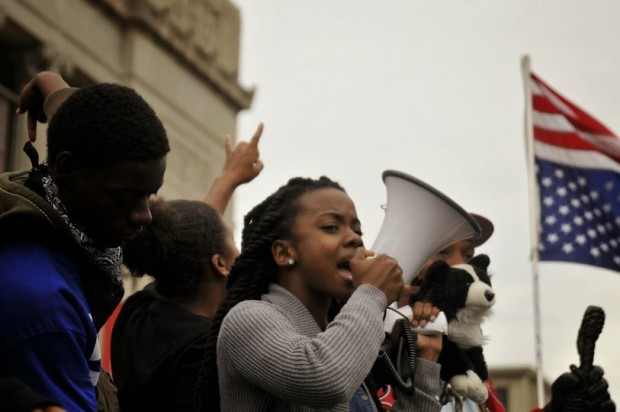 Above photo by Ellen Davidson.

This week we are inspired by the communities that are standing up to police abuse and by the students in Mexico and Hong Kong who are placing themselves at risk in order to fight for their rights.

Last weekend was the national gathering in Ferguson, MO to demand the arrest of Officer Darren Wilson and justice for the families of slain black men such as Mike Brown and Vonderrit Myers. Thousands of people participated in 4 days of nonviolent actions beginning with a march to the police station on Friday night, a massive march through downtown St. Louis on Saturday, direct action training on Sunday, an occupation at St. Louis University and multiple actions on ‘Moral Monday’ including clergy being arrested at the police station, protests that shut down several Walmarts, an action at a mall, a protest inside the City Hall and protests at political fundraisers.

The Grand Jury decision is pending and the concern is there will be no indictment. If this injustice occurs, we must support the Ferguson community through a difficult time and create a national movement that turns decades of racial discrimination by police around. People protesting the injustice in Ferguson have specific demands which Green Shadow Cabinet Attorney General Kevin Zeese describes as uniting us.

People are taking action to end police violence and racism outside of Ferguson as well. Here is Kymone Freeman’s testimony to the DC City Council calling for radical transformation of policing. Anand Jahi writes about his cousin who was killed by police and connects racist policing to economic oppression; and urges building bridges between creating a new economy and racial justice.

This summer, volunteers took shifts in Chicago on Fridays and Saturdays walking through communities and speaking about violence, the needs for housing, food and more. This is how a community works together to build trust and solve problems. Stories are surfacing of community members standing up in the face of violence and oppression. In LA a young father was assaulted by police after picking up his infant son from childcare. Neighbors documented what happened and protested the police actions. In Newcastle, Australia, young men stopped a group from harassing a Muslim family. It is important to expose abuse and stand together against injustice.

Communities in Mexico are demanding justice for the 43 student-teachers from Ayotzinapa who are missing and presumed dead after police detained them and turned them over to drug gangs. These bright students and their families made great sacrifices so that they could have an education. In response, students from their university protested last weekend. Now students are calling for a two-day strike for justice, connecting the strike to mass protests in Mexico calling for education reform.

Students in Hong Kong persist in their campaign for real democracy where candidates are chosen by the people instead of a nominating committee selected by Beijing. They have been demanding talks with the Chief Executive of Hong Kong and currently those talks are scheduled for Tuesday. The students have continued to occupy Central Hong Kong after being removed forcibly by police who fired tear gas and tore down their barricades. The students retook the streets and nonviolently pushed the police back.

Another group of students who inspired us this week are high schoolers in Groton, MA who created the world’s largest peace book. They collected 3,500 letters for peace from around the world and used them to make a 12 foot wide book. This video shows the ceremony of the completed project.

The Block the Boat campaign to end Israeli apartheid continues. This inspiring video shows the most recent effort in Tampa, Fl. They are inviting people to join them for another action on November 1.

Wikileaks released the text of an updated intellectual property chapter of the Trans Pacific Partnership (TPP). It reveals that the US and Japan are the most aggressive in pushing other countries to accept pro-market policies. This summer at an economic justice conference in Mexico, participants developed a process to collaborate on “A Declaration of Principles and Action for a New World,” published this week. It names neoliberal trade agreements and climate change as key issues which unite us and require escalating actions. There is an international week of action from Nov. 8 to 14 to stop the TPP and its sister, “TAFTA.” Click here for more information on how to get involved.

One of the keys to creating a clean, renewable energy economy  is ending extreme extraction of uranium and fossil fuels. The Clean Up The Mines campaign launched this year is focused on cleaning up the tens of thousands of abandoned uranium mines scattered throughout the United States and for a moratorium on further extraction until that is accomplished. Click here to learn more about that campaign. And click here for information about the November Summit for a Nuclear-Free Future.

Also in November, there will be a week of actions, Beyond Extreme Energy, in Washington, DC focused on retiring fossil fuels. Click here for more information on that and to join the Popular Resistance Climate Justice affinity group. One of the targets is the Federal Energy Regulatory Commission (FERC) which is rubberstamping permits for more extraction projects despite serious risks to local communities and worsening of the climate crisis.

The Cove Point Liquefied Gas export terminal is a critical project to stop. The FERC recently granted a permit for its construction, but local groups filed a legal challenge to stop it. If Cove Point is built, it will drive a frenzy of fracking in the Marcellus Shale, a large deposit of methane that lies below New York, Pennsylvania, Ohio, West Virginia and Maryland. Like the Alberta Tar Sands bitumen, the Marcellus Shale methane is a carbon bomb that needs to stay in the ground.

In addition to stopping extraction of fuels and moving to clean renewable energy, we also need to build community and social infrastructure so that we can work together when extreme weather events occur. Kit O’Connell describes this in his article, “How to Protect Communities from Climate Change” which encourages planning that enhances the community like building watersheds that are also public parks rather than oppressive structures like walls.

Climate change also leads to greater risk of infectious disease epidemics. We are learning from the current response to the cases of Ebola that the US healthcare system is ill-prepared to handle an epidemic. A national survey of nurses found that only 1 in 5 hospitals are adequately prepared for an Ebola outbreak. The many mistakes that have been made so far in handling Ebola are connected to the fact the healthcare system in the US is designed for profit rather than for protecting and enhancing public health.

To stay on top of this news and more, we urge you to click here to sign up for the Daily Digest.