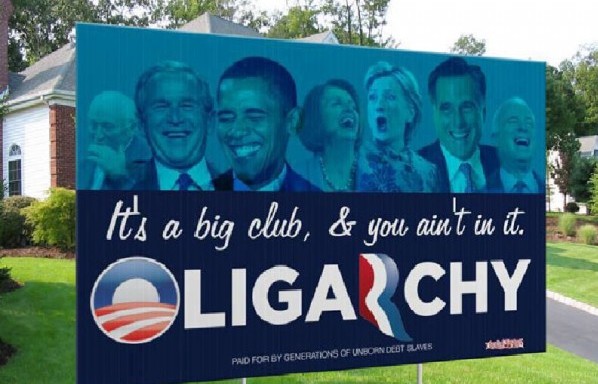 Popular Resistance Newsletter – Democracy Rises In A Time Of Oligarchy

It’s official. The first ever scientific study of democracy in the US finds that we are an oligarchy (ruled by the few). We think it’s more accurate to say plutocracy (ruled by the wealthy). Some correctly say that the US is a representative democracy, but this study shows that the ones being represented are not the people (demos). It brings the legitimacy of our entire government into question.

Jerome Roos writes that we must go deeper than recognizing that the US is an oligarchy and discuss whether this is the natural result of a capitalist system. It can certainly be argued that neoliberal economics, the mature form of capitalism, lead to oligarchy as public goods are concentrated in the hands of a few. But “oli” means “few” and we are many and that is why people power (democracy) can prevail.

Students are fighting for our future

This week, Dr. Adam Gaffney published an excellent history our health care system’s neoliberal turn. He names the names behind it and points out how we’ve been indoctrinated in this system. It has been so successful that progressives are now championing privatization of our health care system. But these savvy medical students are not fooled. They are organizing for a single payer health system and they marched last weekend in Chicago for “Patients over profits!”

Students are leading the fight on a number of fronts. At the University of Southern Maine, students protested cuts and won. And at UCSC, graduate students are fighting for the right to organize. One student shares the lessons they are learning in that process. A new CBO report this week shows that the government is making $12 billion in profits from student loans each year at the same time that more of the cost of education is placed on students. That sounds like stealing our youth’s future to us.

The new IPCC report shows another side of what we are doing to our future. When it comes to climate change, we face a choice, as outlined here, to do something now or suffer more later. Greenpeace calls us to fight for a 100% renewable energy future in the Paris Treaty next year.

Students are taking a stand against extreme energy extraction at Washington University, where they have been sitting in to protest Peabody Coal for two weeks. Jeff Biggers describes the importance of their action, saying “We are all in the coalfields now.”  He cites Peabody as a huge obstacle to taking on climate change. Another obstacle is the rising number of murders of environmental activists around the world. We must shine a light on this situation.

This week the Guardian and Washington Post received the Pulitzer Prize for its coverage of Edward Snowden’s leaks on the NSA. Snowden wrote that this vindicates his actions. And an event was held at Georgetown Law School to launch the next phase of Chelsea Manning’s case. Her appeal will include historic issues such as the use of the Espionage Act to convict a person without proving any intent to spy. This could be a death blow to our right to Freedom of the Press. Chelsea also released a drawing of how she sees herself, and the Gay Pride Parade in San Francisco chose her to be their Grand Marshall this year.

There’s nothing stronger than the power of the people…

The fight to stop deportations has been escalating this year and is making a difference.  David Bacon describes the Immigrant Rights movement as the new civil rights movement and describes its “growing insurgency.” A new sign of its success is the announcement that police in Philadelphia will no longer detain immigrants for ICE. And as a reminder of our power, passengers on a flight that was being used to deport a man from Sweden staged an impromptu act of resistance and stopped the deportation.

Due to unexpected community pressure, the 250 UPS workers who were fired after standing up for a colleague were reinstated.

The movement to build more worker cooperatives is growing. United Steelworkers is working with Mondragon International on a union cooperative model which they outline in a new white paper. And here is a resource from American Coop for people who want to start a cooperative business. In her new book, Collective Courage, Jessica Gordon Nembhard writes that worker cooperatives and civil rights movements have a long history together.

Cooperatives are one component of a democratized economy. In addition to individual projects, some cities are starting to work towards a bigger vision of a local economy that supports the local population. There has been a strong effort in Jackson, MS which faced a new challenge with the unexpected death of Mayor Chokwe Lumumba who was leading the effort. However, they continue to press on and hope that the mayor’s son who won the recent primary will be his successor.

We want to remember another longtime activist who died unexpectedly this week. John Judge was a brilliant activist who stood on the side of demanding truth during his lifetime of advocacy in Washington, DC.

The April congressional recess starts this weekend. Members of Congress will be in their home districts. This provides an opportunity to pressure them. Here are two campaigns you may want to join: The Alliance for Global Justice invites you to join them in stopping the US (which funded the opposition) from sanctioning Venezuela. And now that Senator Wyden has announced that he will create a new fast track for the Transpacific Partnership, the next round to stop the TPP begins with a spring campaign that is full of actions!

Today, anti-drone protesters including Kathy Kelly and multiple clergy are holding a Good Friday service in front of Beale Air Force Base to bring attention to the immorality of using drones for extra-judicial killings. The Drone Quilt Project is on tour again. Click here to see if it will be in your area. Or you can join the action at the NSA on May 3.

If you live in the Northwest, you can catch the amazing Anne Feeney and Evan Greer as they bring the spirit of Pete Seeger alive in their Carry It On Tour.

The Global Climate Convergence begins on April 22 with hundreds of actions over ten days. A highlight is the beautiful Procession of the Species. PopularResistance will be in South Dakota to launch the Clean Up the Mines! Campaign.

On April 24, people from coast to coast will hold protests outside of Staples to stop the gradual privatization and destruction of our Postal Service. The Cowboy Indian Alliance will be in DC from April 22 to 27 to protest the oil pipelines. They invite you to a mass day of action on April 26 which will be livestreamed by the DC Media Group.

April 28 and 29 are national days of action against Wells Fargo. There are so many reasons to protest them – pick one that inspires you. A big one is their investment in the prison-industrial complex. A new campaign was announced to end mass incarceration, the shame of our country, with a month of actions in October. Get involved by holding a teach-in or rally in your community. And there is a national day of action to close the prison at Guantanamo Bay on May 23.

Yes, the US is an oligarchy but democracy (people power) is springing up everywhere. And together we will stop the predatory neoliberal corrupt machine and create a new world of solidarity, justice, integrity and sustainability.