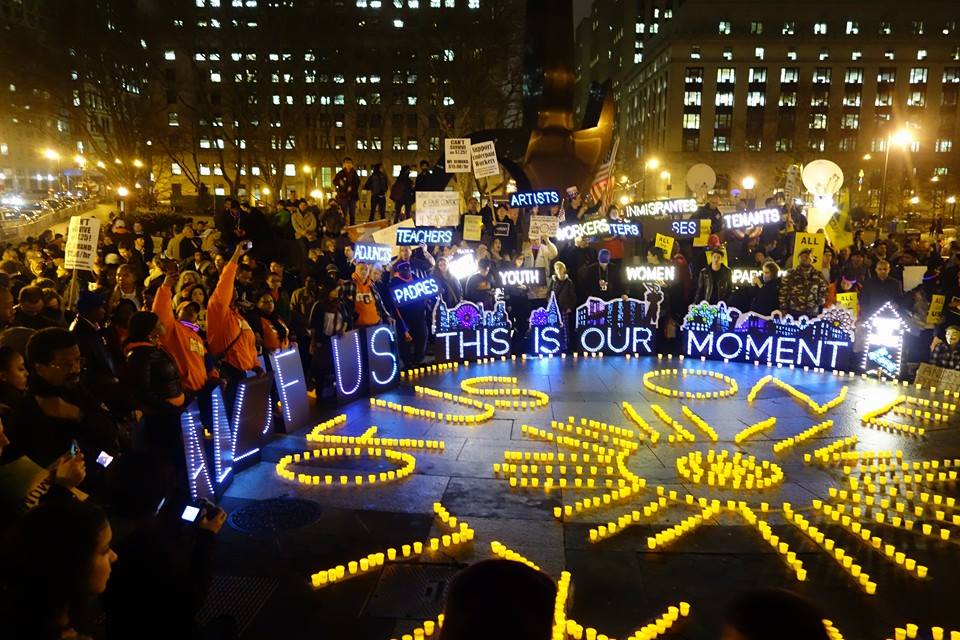 This photograph from the NYC Light Brigade came at the end of an incredible day of action on December 5 when fast food workers in 100 cities walked off their jobs and joined with supporters in their communities to protest poverty wages.

The solidarity at the fast food worker protests on December 5 echoed the solidarity seen on December 3 when people throughout the United States and around the globe protested toxic trade agreements especially the World Trade Organization (WTO) and Trans-Pacific Partnership (TPP).

We are moving toward becoming a movement of movements that cannot be ignored because more people are coming to the realization that our individual struggles are all connected to a larger struggle and that we have more strength when we act together rather than alone. As unity becomes a reality, we will succeed in creating the kind of solidarity that will make this era “OUR MOMENT.”

South Africa is mourning the death of Nelson Mandela.  His vision for South Africa was of a rainbow – uniting all people, no one race white or black dominating others.  The liberation he sought was not only ending the racist and abusive apartheid system but also ending an economic system which allowed the white minority to profit while the black majority was impoverished. His vision of a country without poverty has not yet been realized, but he saw the whole and today the country is united around his legacy.

Mandela said, “The most vital task facing the democratic movement in this country is to unleash such struggles and to develop them on the basis of the concrete and immediate demands of the people from area to area. Only in this way can we build a powerful mass movement which is the only guarantee of ultimate victory in the struggle for democratic reforms.” In other words, Mandela saw the need to build a movement of movements connected in purpose but organized around the immediate needs and demands of various communities.

Such a united movement is growing in the United States and around the world. In Wisconsin, Occupy Community Organizing has been reaching out to work across issues at the local level and they are now sharing what they’ve learned with people in other communities.

Recent reports expose that a growing number of people are struggling due to a rigged economy and austerity spending which further fuels the movement.  Philadelphia and other cities are hurting from school closures.  Pensions are under attack in Detroit which a court ruled was bankrupt this week; pensions of public workers are also threatened in Illinois.  And while our public institutions are being dismantled, our public dollars are subsidizing CEO profits. A report by the University of California at Berkeley’s Labor Center finds that poverty wages of bank tellers require $900 million in public assistance, while a report from the Institute for Policy Studies found the same for low wage fast food workers. We all pay for this unjust business model.

Extreme methods of energy extraction such as the tar sands, mountaintop removal and fracking have also spurred a larger and more aggressive movement to stop them. This past week, students from the University of Chicago protested fracking at a public hearing. New blockades and occupations have sprung up and the Elsipogtog and Mi’kmaq in New Brunswick continue to try to protect their land from drilling.

According to leaked Stratfor documents, the energy industry’s worst nightmare is coming true because of the actions that environmentalists are willing to take to nonviolently protect the land, air and water. In fact, one oil CEO revealed that the Department of Homeland Security is now placing community members who oppose fracking on the terrorist watch list, revealing their fear of mobilized people.

The Urgent Need For Unity To Stop Transnational Corporate Power

In addition to fighting back in communities, people across movements are connecting their struggles and working together on specific campaigns. This was demonstrated best over this past week in the Global Day of Action against Toxic Trade Agreements on December 3 which coincided with the first day of the World Trade Organization (WTO) meetings in Bali, Indonesia. Hundreds of civil society members gathered in Bali to protest provisions in the WTO package that jeopardize food and climate security as well as including other threats to human rights and wellbeing.

There were colorful actions outside of the meetings in Renon Square and creative surprise actions on the inside such as this flash mob by women leaders from the Philippines for climate justice. Indian farmers, laborers and their allies also protested inside as they monitored whether their representatives would compromise the needs of the people.

Civil society groups from around the world held their own Global Peoples Tribunal in which testimonies of those affected by the WTO’s policies were heard. The Tribunal issued its findings which concluded with this statement:  “We recognize that the struggle of resistance goes hand in hand with the construction of alternatives of an economy for the people and the planet, with initiatives such as the indigenous knowledge systems, seed banks, food sovereignty, and a new paradigm for trade and investment, as well as a new juridical system that will deliver justice.”

Likewise, civil society groups in North America joined the Global Day of Action on Dec. 3 with actions in 35 cities focused on stopping the Trans-Pacific Partnership (TPP). And thousands of farmers in Japan protested the TPP during Vice President Joe Biden’s visit. In Washington, DC, we joined local activists to deliver thousands of petition signatures to US Assistant Trade Representative Stan McCoy at his office to tell him to stop bullying negotiators from other countries into accepting harmful provisions.

Due to our persistence, we did meet with Jewel James, the public liaison, and told her of our serious concerns, especially the reality that many will die due to lack of access to necessary health care if the patent protections for medications and other treatments are passed as currently written. We hope that the knowledge that the TPP is literally trading away lives for corporate profits will motivate a brave person in the Office of the U.S.  Trade Representative to release the text of the TPP.

Analysis of text that has been leaked to date finds that the language being pushed by the United States on intellectual property rights violates international norms. Last month, more than 80 law professors and academics sent a letter to President Obama and Congress criticizing the secrecy with which the TPP is being negotiated and calling for the text to be released to the public and for a new negotiation process that is more inclusive and democratic.

This weekend, TPP negotiators are meeting in Singapore in an attempt to complete the agreement. And pressure is being put on Congress to give the President Fast Track Trade Promotion Authority to sign the TPP into law himself. This would prevent a transparent and democratic process in Congress and a full review of the potential impacts of the TPP. Members of Congress are pushing back against this executive power grab, including more than three-quarters of Democrats in the House. Labor unions released a statement to let the TPP negotiators know that opposition to the TPP is broad and deep in the United States.

We can be certain that corporate lobbyist are pushing hard for Fast Track so we need to push back, now is the time to act – we have an opportunity to put a nail in the coffin of Fast Track and the TPP.  Act now, here’s how.

Lessons from the Success of the Battle of Seattle

Since the mass protests in Seattle in 1999, the WTO has not been able to move forward with its agenda and it looks like the current meeting did not accomplish much. The TPP and its European sister, TAFTA which began negotiations in July, are thought to be attempts to advance the WTO agenda through another path.

The opportunity is rising for us to push away from corporate-dominated rigged trade that allows transnational corporations to exploit people and the planet with impunity to an era that is transparent, inclusive and democratic and that puts the needs of people and the planet before profits.

This week was also the 14th anniversary of the Battle of Seattle, David Solnit wrote about the “Lessons for Today” from that success.  He interviewed Paul deArmand, a researcher and activist; and a giant who passed away this year.  This article brought up many important points for a movement of movements to succeed, but first he highlighted one we should not forget “the unexpected political power of ad-hoc, even accidental, coalitions.” Seattle was a success because it brought people together across issues in a focused effort to stop the WTO. Let’s not forget the success of working together.

Another lesson of Seattle was the value of networks, rather than institutions.  Networks confuse the opposition: “Networks operate by ‘swarming’ their opponents, approaching stealthily and from many directions in offense . . . leaving opponents unclear about what is occurring and how to respond.” Networks have multiple centers of power “all moving toward a shared general goal.”  The energy for the network comes from sharing information; the goal is to grow the network, not just one node of it. Further, by spreading our values widely, we make some in the power structure question themselves and their values thereby weakening the pillars that hold the status quo in place.

Making ALL OF US Real

When we make the “ALL OF US” photo on the top of this article a reality, and become an inclusive movement that spreads its values widely, communicating not just with each other but more broadly, we will unite our base and create a foundation to build a mass movement on and grow to a point that cannot be ignored. A mobilized mass movement can erase the artificial political limitations of today and change the political culture of the nation.  When that happens, things that seem impossible to change, like apartheid in South Africa, become remnants of history.

The immediate priority of stopping Fast Track for the TPP, TAFTA and other corporate trade rigging, is an opportunity for us to act in unity. It is an “ALL OF US” moment.  The rigged trade of the TPP is stalling and united we can stop it. Find out what you can do here.

Let’s take advantage of the opportunity to stop this transnational corporate power grab – let’s swarm them, come from many directions and confuse them. Let us move from our multiple centers of power toward the common goal of building the power of the people. We have a common goal, together we can achieve it; and then we can build from that success as we will have shown that this is indeed, OUR MOMENT for transformation.