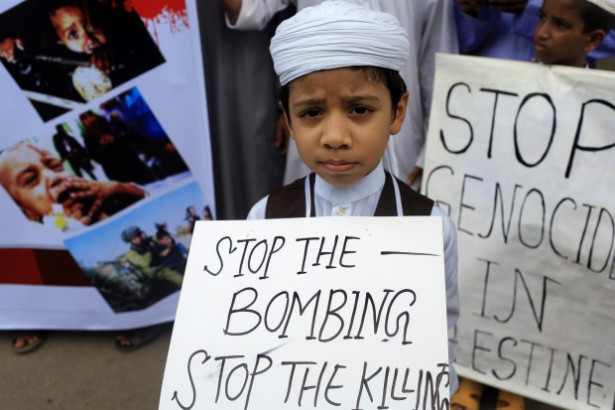 This week we mourn for the people of Gaza who are under air and ground assault by the Israeli Defense Forces. The attack is in its second week and continues to escalate with ground troops entering Gaza yesterday.

We are sad that this attack was based, as most are, on lies. The Israeli government knew that the kidnapped Israeli boys were dead but kept that secret for weeks while it manipulated the public into believing they were alive, arrested Palestinians and whipped up anger. And cease-fire negotiations were similarly  manipulated to give Israel an excuse to escalate and lay the full blame on Hamas when they were never included in the negotiations between anti-Hamas Egypt and Israel. Would Israel agree to a cease fire negotiated by Hamas and Syria?

We are sad that the El Wafa Hospital was destroyed with patients and health personnel inside even though international allies occupied the hospital in hopes of protecting it.

We are sad that hundreds of Palestinians, many of them children, and one Israeli have been killed. This week, four boys aged nine to eleven were murdered by Israeli rockets while they were playing soccer on the beach. US and international reporters witnessed their unjustified deaths and still the US State Department falsely blamed it on Hamas.

We are sad that the US media are complicit in the lies. The New York Times changed its unusually honest headline about the 4 boys who were killed on the beach to one that is misleading.  ABC news showed photos of destruction in Gaza and said that it was Israel. And we are sad that the Boston “T” took down the ad campaign that educated about the abusive treatment of Palestinians.

At the same time we are cheered that the truth about Israeli apartheid and violence is being told despite the lies and manipulation. We know it is a difficult truth to face, especially for Jews who have grown up in falsehoods, as Ellen Davidson describes.

And, we especially appreciate Israelis of Jewish Faith who can see through decades of lies and propaganda.  The views of Eran Efrati, a Jewish veteran of the Israeli Defense Forces and a 7th generation Jerusalemite, are particularly persuasive. He urges Americans, especially Jewish Americans, to join him in signing a letter that says “you can’t support human rights violations. That you can’t support racism. That you won’t support the idea that Jewish lives matter more than Palestinian lives.”

Social media is playing a big role in making the world aware of the atrocities inflicted on Palestinians in Gaza. We see the death and destruction. We see young children in despair over the death of their parents and siblings and we see parents in anguish over the deaths of their children. And we hear their fears and hopes. We posted this Manifesto from Palestinian Youth who are caught in the middle of it all and are invisible. They want three things: to be free, to live normal lives and peace.

And we are heartened to see a global response to the atrocities. Protests are taking place all over the world. There are so many that we can’t cover them all. Protests are being held in front of the corporations that make the Israeli attacks possible. Here are videos from global protests and here in the US.  In Turkey, protesters tried to break into the Israeli Consulate and send the diplomats home. In New York, protesters disrupted a city council event that supported Israel. Thousands of people turned out in Detroit even though they are fighting their own battles.

Awareness of and resistance to the Israeli apartheid is growing. We encourage you to take action to end it so that Palestinians and Israelis can live in peace. Call the White House (202-456-1111) and tell the President to stop supporting the attacks, call Congress *(202-224-3121) and tell them to stop sending our tax dollars to support the Israeli army, join the boycott movement and show up at or organize a local protest to call for peace. Just as international pressure ended apartheid in South Africa, we can end the injustice against Palestinians.

Our collective power is growing. This week the FCC concludes its public comment period on Net Neutrality. Their proposed rules would allow a tiered Internet where people only have access to content based on what they can pay and a handful of corporations could control what is seen.

A strong reaction in May when the proposed rules were leaked put the best solution, reclassifying the Internet as a Common Carrier as it was initially so that equal access is guaranteed, on the table. As the deadline for public comments neared on Wednesday, so many people wrote in that the FCC’s servers crashed and the deadline had to be extended to Friday at midnight. Now, more than a million public comments have been submitted, more than any other rulemaking process in FCC history.

The next phase lasts until September 10 and is a time for people to respond to comments submitted by opponents of net neutrality. We will also be pushing with our net neutrality allies for public hearings around the country so that FCC commissioners will hear directly from the public. Stay tuned to Popular Resistance every day for updates and what you can do to help.

We will keep you informed. The fastest way to know what is going on is to follow us on twitter.

Time to converge for people, planet and peace over profit

When we work together in a strategic way, we can win. When it comes to creating a sustainable future, it really is up to us to make it a reality. The UN and major nations have shown they are incapable of taking the necessary steps to address the growing climate crisis.

There are a series of UN meetings leading up to the Paris Treaty in December, 2015. One meeting will be held in New York City in September. Bill McKibben and others have put out a call for a large march on Sunday, September 21. While it is important to make our concerns about climate change visible, the march itself will have no demands and no coordinated messages.

Anne Petermann of the Global Justice Ecology Project reminds us that not all climate crisis solutions are created equal and not all are actual solutions. The climate march provides an opportunity for people who understand the severity of the situation and the need to transform our systems to come together, share knowledge and strengthen our movement.

With the Paris Treaty looming, this time, we have to get it right. As part of the Global Climate Convergence, Popular Resistance is working to organize a NYC Climate Convergence on the Friday and Saturday before the march. In addition to plenaries, workshops and skill shares, we will organize to bring a strong message to the march. And we want you to join us. Please contact us at info@popularresistance.org if you are interested in organizing a local contingent to come to New York.

There is so much happening, that we can’t include it all in each weekly newsletter. That’s why we also urge you to click here to sign up for the Daily Digest so that you get the news each morning. And check our Calendar for upcoming events.