This week the Social Progress Index was released and it reveals a consistent pattern that we see – the US is in rapid decline and heading for long term stagnation and decay. While the overall wealth of our nation is growing, enough so that every family of four would have close to $200,000 per year if the wealth were equal, it is all going to the top, as the wealth divide continues to expand.

Nomi Prins, author of All The Presidents’ Bankers, tells the hundred year history of the collusion between the Big 6 Banks and presidents and shows that the results are more destructive now than ever before. If we ever needed a Popular Resistance, the time is now. And that means you!

There is a lot going on, so find a place to plug in and do what you can. The World Wide #WaveOfAction started last Friday with actions across the country. New York City, in particular, has gained new energy from the Wave.

Today, actions are taking place from coast to coast to protest spying and shut down fusion centers. Click here to see if there is one close to you.

We all know the NSA is watching us and now Glenn Greenwald has exposed that they are controlling the media message too.  However, the tide is beginning to shift. A European Court of Justice recently ruled in favor of protecting individual’s privacy. And now hundreds of groups are calling for policy makers to establish laws in accordance with the International Principles on the Application of Human Rights to Communications Surveillance. The ACLU is offering a new tool that may be helpful; it allows you to see a compilation of NSA documents.

The EFF explains the depth of surveillance through fusion centers, local places where 17 intelligence agencies meet. They say fusion centers satisfy “one of the biggest dangers of the surveillance state: the unquenchable thirst for access to the NSA’s trove of information by other law enforcement agencies.” And to show how extreme this thirst has become, the Detroit News reports that a very safe area, White Lake Township, has one of two dozen local police forces that used Department of Homeland Security (our taxes) dollars to purchase a super-secret cell phone tracking device called Hailstorm that they don’t even understand!

The anti-drone movement is also escalating its tactics, growing and seeing some success. The list is long so we will only highlight this one: the EU passed a resolution calling for a ban on the use of drones for extrajudicial killings. Contrast this with the recent US District Court refusal to rule on the legality of drones being used for the extrajudicial murder of an American citizen and his 16 year old son. It appears that the President is above the law.

This is a week of drone actions at Creech Air Force Base. In Afghanistan, huge portraits are being used to show drone operators that “people are not bug splats,” as they are called by the operators.

On another note, in Maine this weekend, veterans are holding a conference to discuss their state’s role in the Asian Pivot. This is very timely to counter the propaganda because Gen. Chuck Hagel is on tour to portray the pivot as humanitarian and the US military as an “agent of mercy” in times of climate change-induced conflicts and disasters.

Stand Up for Your Rights!

All sorts of actions happened this week in which communities stood up for a broad range of rights. Of particular note is the escalation of pressure on Obama to stop deportations. Last weekend, events were held in more than 70 cities and in front of the White House where protesters say they will hold a constant presence until the deportations stop. How is the US responding?  In the middle of the night, one of the organizers of a hunger strike was deported. This retaliation is shameful!

Graduate student assistants who are trying to organize to protect their rights at the University of California have also faced growing retaliation including recent arrests for striking. And the struggle to stop the corporatization of education is heating up after a recent week-long conference of teachers, students and parents in Denver. The group called United Opt Out is standing up to forced testing that is being used to punish teachers and close schools.

Thousands of students in Brooklyn are refusing to take the tests and teachers there are united in calling “for the elimination of the high-stakes nature of standardized tests.” Hundreds of teachers and families also protested in New York City after learning that the passage of sweeping protections for charter schools would result in the eviction of students with special needs.

Students are also fighting for their future by pushing hard to end the era of dirty energy. In Massachusetts, hundreds of Students for a Just and Stable Future walked out of school and marched to the state capitol calling for divestment from fossil fuels. And pressure from students and alumni at Harvard has started to move the administration towards divestment, though more pressure is needed for real results.

Indigenous peoples are leading the fight to stop the extreme extraction of fuels. Will Falk describes the long history of Native Americans working to save the planet and calls on all settlers to join them. Here are three ways that anyone can get involved:

There is a lot more going on to stop dirty fuels and move to clean renewables. Share what you are doing with Popular Resistance.

And now that the ACA deadline has passed, the call for single payer is getting louder. Labor unions are being urged to take a stronger stance because the ACA is designed to accelerate the race to the bottom in health benefits and will worsen inequality. An economist makes a strong case that the ACA is the best that can be achieved within a market-based health system and it is woefully ineffective and unacceptable. If you are refusing to buy private insurance, as we are, you can join us in telling the President that we need Medicare for all. And we highly recommend bringing this play about health care, “Mercy Killers,” to your community to stimulate the discussion we need to be having about whether health care should be treated as a commodity or a public good.

We have a huge task ahead of us – to stop the ravages of predatory capitalism and build alternative systems that are based on justice, democracy and sustainability. We are facing historic crises in many areas.  But still, we are optimistic because we see positive signs. 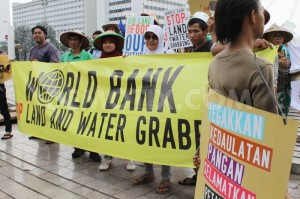 Those involved in the struggle for a living wage see that fight as part of the bigger struggle for worker rights for all workers and for creating a democratized economy. Those involved in work to protect water are organizing the largest international gathering ever to share best practices in restoring watersheds and more. Farmers in Africa and other countries affected by land grabs are organizing a global campaign, Our Land Our Business, to take on the World Bank, and those of us in the United States have a crucial role to play in it because the World Bank meetings are held in Washington, DC and the bank is dominated by the US and western governments.

There are many signs that another world really is possible. In his new book, The Energy of Nations, Jerome Leggett  describes amazing things that are already happening and “outlines five key critical factors which – depending entirely on our choices – could serve to challenge the status quo and speed the transition to new paradigm.” Let’s do it!